Congressional Republicans are closer than ever to passing wide changes to America’s tax code. From 10,000 feet, they largely feature:

There’s debate regarding how much individuals will actually benefit, but there’s little debate that certain public companies will gain. Both the Senate and the House are looking to cut the corporate tax rate from 35% to 20%. Plus, companies will be allowed to pay a low, one-time repatriation tax on profits already sheltered overseas.

The idea is that U.S. corporations will use this windfall to hire more people, and many likely will … but that’s not the only place that money is going. You can expect that cash to be plowed into dividends, buybacks, R&D and M&A.

Since our beat is dividends, let’s look at four yields (up to 7.2%) should benefit in a big way – both with payout and price upside in 2018:

Apple (AAPL) is a dividend growth monster with gobs of cash, and should provide excellent yield on cost over time. More immediately, it’s going to be a clear-cut winner of whatever the Senate and House end up settling on.

The benefit that has been most discussed is any so-called “repatriation” holiday.

Apple currently has $261 billion in cash and investments, and the lion’s share – a whopping 94% – is considered “overseas.” The passage of a tax-cut bill likely will result in a repatriation tax around 10%-15% on cash assets, instead of the current 35% corporate rate. And as great a dividend growth company as Apple has been under CEO Tim Cook, it has been an even more prolific share-reducer, spending billions of dollars on buybacks every year and reducing its share count by nearly 20%.

Thus, if Apple does bring its money back home, it could end up using that on an even more aggressive buyback program, and possibly a special dividend, among other things. 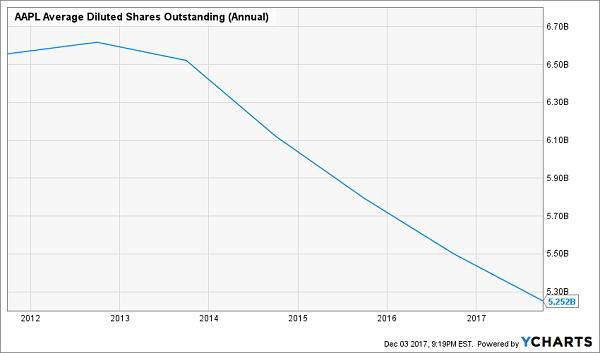 Also, more dollars in the pockets of American consumers equals more money to spend on Apple’s aspirationally priced products, not to mention its iTunes and other services. Apple, which has enjoyed profit margins in the 20%-23% range for the past few years, will then retain more of its earnings under the lower corporate rate.

There’s no arguing that the upper class is growing. Today, one in every 20 Americans is a millionaire, with the country currently boasting more than 15 million people worth seven digits or more. Two major budget analyses have said that these people are about to enjoy an outsize benefit from Republican tax legislation.

Thus, another way to play tax-cut passage is pretty straightforward: Target the rich.

Vail Resorts (MTN) is illustrative of companies that benefit from the growing “experience economy,” where people are increasingly spending money on going out and doing things, including activities and travel. And Vail Resorts – which primarily operates mountain resorts and urban ski areas, but also owns lodging, condos, and other real estate around resort communities – is very much the playground of the kinds of people about to enjoy significant tax savings.

What’s important to know about the ski industry right now is that it’s increasingly consolidating under the banners of a handful of companies, including Vail Resorts. And Vail is using its breadth to its advantage, offering the “Epic” pass that allows entrance to ski resorts across the world, including to numerous properties it owns in the U.S. Lousy conditions in Mount Brighton in Michigan? Well, what about a weekend trip to Canada’s Whistler Blackcomb instead?

Vail is a well-run operation whose top and bottom lines have exploded over the past few years. The fact that its clientele is about to enjoy some fiscal stimulus only makes it look like even more of a sure thing.

Another way to benefit from more cheese from the upper crust? Upscale hoteliers.

LaSalle Hotel Properties (LHO) is a luxury hotel chain that owns 41 hotel properties in attractive U.S. markets including Los Angeles, New York City, San Francisco and Chicago. While a few of its hotels are under larger known brands such as Hilton (HLT) and Hyatt (H), it also boasts properties such as the San Diego Paradise Point Resort & Spa, Chaminade Resort & Spa in Santa Cruz, and Hotel Palomar in Washington, D.C.

LHO had to temporarily close a pair of resorts in Florida, and suffered tough year-over-year in Philadelphia, which hosted the Democratic National Convention in July 2016 – both of which weighed on its third-quarter results. Revenues were off 12.5% year-over-year, and adjusted funds from operations (AFFO) per share dropped 20% to 68 cents per share. But this also provides an example of how conservatively managed the company is. Despite that massive drop in AFFO, the company still boasted roughly 150% dividend coverage on its 45-cent quarterly payout.

A rough year for LHO has weighed on shares, but propped the dividend up to well above 6%. That’s a bargain waiting in the wings.

Note: MLPs still can be an absolute hassle come tax time, which is why many investors are better off investing in MLPs via funds without the tax headaches. Still, it looks like MLPs are about to get a helping hand from Congress, and that includes companies such as Energy Transfer Equity (ETE).

Energy Transfer Energy (ETE) Is Turning on the Cash Spigot 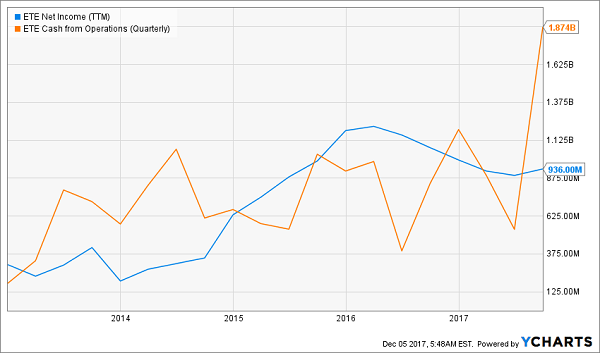 ETE owns the general partner and 100% of incentive distribution rights of the now-merged entity made up of Energy Transfer Partners (ETP) and Sunoco Logistics Partners. All told, this company controls more than 71,000 miles of energy pipelines, terminals, storage and fractionation facilities for natural gas, crude oil, nat-gas liquids and refined products.

Energy Transfer is coming off a strong third quarter that saw net income jump 20% year-over-year. And while cash flow was light, that was thanks to incentive distribution waivers meant to help fund ETP’s growth – waivers that should start thinning out now that ETP’s projects are online and ramping up.

While I wouldn’t recommend an entire portfolio of MLPs (unless you have a score to settle with your accountant), I do like seven IRS-friendly stocks (and funds) yielding an average of 8% today.

Their dividends are safe, and believe it or not, their prices are a bit undervalued to boot. This means we should enjoy price upside as well, and achieve 10%+ annual returns on these dividend machines.

Let’s talk more about these income plays, because you should be tuning out the “first-level” pundits – those who do little or no original thinking – and replacing your underperforming payers with these meaningful (and safe) 8% yields.

Most of the stocks you read about in the mainstream media that pay 5% or better are train wrecks. They have big stated yields for the wrong reason – namely, because their prices have been axed in half or worse over the past year!

For example, retailer Macy’s (M) pays 7%+ on paper. But its business model is toast. Next quarter’s payment may happen, but that’s a risky game I’m not willing to play.