Blue chip stocks are among the worst retirement investments you can make.

There are several blue-chip stocks that will actually cost you thousands of dollars each year. We’ll discuss three in a moment.

Sure, the financial media might lionize these stocks. But blue chips are simply big companies. When the term first came into being, it was simply an homage to the blue poker chip – at the time, the most valuable chip on the table. Before purples, oranges and grays began to grace the baize.

However, now the term comes with a boat load of perks – the simple assignment of the term “blue chip” is practically a buy recommendation. And therein lies the danger. Because in many cases, these larger companies have not only hit the end of their growth cycle, but are nearing the latter stages of their dividend growth cycle as well.

This means that keeping your money in these blue chips can severely cap your nest egg’s upside. Let’s compare “safe” blue chip stocks paying 2% or 3% per year in dividends, growing their payouts by 3% to 4% per year with other investment options.

Generally speaking, a stock price will appreciate in-line with its dividend. This means a 4% dividend grower will see its shares rise by about 4% per year over the long term.

When we combine a 2% to 3% current yield with 3% to 4% yearly price upside, we get 6% growth. This may be safe, but who cares. It trails the market and the 8% dividend payers (with upside potential) you could easily enjoy with more careful research:

I’ll share my favorite picks for reclaiming that $600K+ in a minute. First, let me pick on three blue chip dogs to show you an example of “dead retirement money.”

The name L Brands (LB) probably won’t spark much in your memory banks, but its brands certainly will – Victoria’s Secret and Bath & Body Works, as well as Pink, La Senza and Henri Bendel.

Victoria’s Secret and Bath & Body Works specifically are practically royalty among mall-store names – but that’s a tarnished throne to sit in. And L Brands’ operations and stock-price performance both reflect that.

Malls might be getting crushed as Amazon.com (AMZN) wreaks havoc across brick-and-mortar retail, but to L Brands’ credit, during the past five years – during which many retailers’ top lines have dwindled – LB’s revenues have improved each and every year.

But that’s where the plaudits end. The company has watched its operating margins dwindle over the past couple years, and as a result, profits have shrunk from about $1.25 billion to $980 million in just three years. Worse, analysts expect another pullback on the bottom line this year, from about $3.20 per share to $3.17. That’s not enough to put the dividend in danger – at $2.40 annually, that’s still about three-quarters of net income – but the payout has been stagnant for years, and the company’s profitability trend means investors should expect more of the same.

Even the top-line progress might be in serious trouble soon. The Victoria’s Secret brand is deteriorating rapidly, less able to command the premiums it once did. Last year, comparable-store sales declined a miserable 8%; if it weren’t for a resurgent Bath & Body Works, L Brands would be in even more dire straits.

A few retailers still are worth buying in the Age of Amazon, but L Brands isn’t one of them.

L Brands (LB) Is Making a Massive Sacrifice for Growth 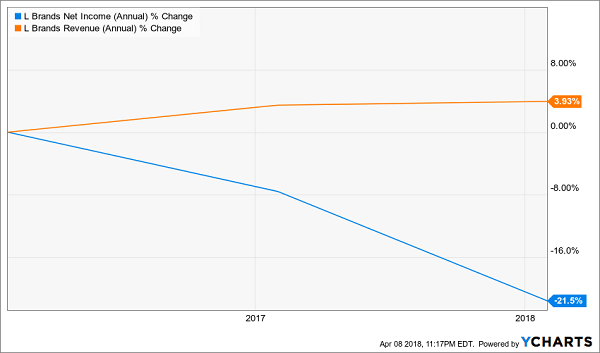 When you think of typical Amazon victims, your mind goes to companies just like L Brands … but probably not to consumer staples darlings like Procter & Gamble (PG).

But hear me out. P&G may very well have its own Amazon problem.

At the moment, you can buy popular Procter & Gamble brands such as Tide laundry detergent, Crest toothpaste and Pampers diapers on Amazon.com, which would seem to be a good place to be as consumers migrate out of grocery stores and into the online checkout lane.

However, Amazon is beginning to build its own army of private-label products, boasting more than 70 brands, according to Recode research. Most of those are in clothing, shoes and jewelry, but AMZN also sells things such as toilet paper and paper towels via its Presto brand, and baby wipes under Amazon Elements.

It’s bad enough that Amazon is encroaching upon P&G by entering the consumer-staples arena, but couple that with all of the purchasing data Amazon has collected on Procter & Gamble’s sales, and add in Amazon’s ability to increasingly promote its own brands via its legacy site and through the Alexa AI interface, and it’s clear this is a potential time bomb for numerous staples companies, P&G included.

Yes, PG’s dividend yield is at the high end of its 10-year range. But considering its Amazon problem, as well as analyst estimates for low-single-digit top-line expansion over the next few years – and throwing in the company’s lackluster 15% dividend growth during the past half-decade – I just don’t see a buy case for this revered but slowing blue chip. 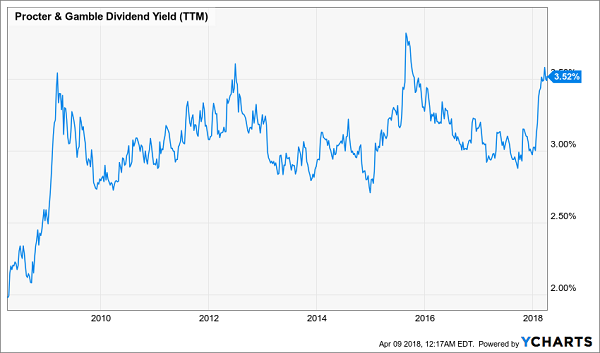 If you’re a value hunter, you’re going to bristle at this next chart.

Will the Market Ever Recognize Ford’s (F) Value? 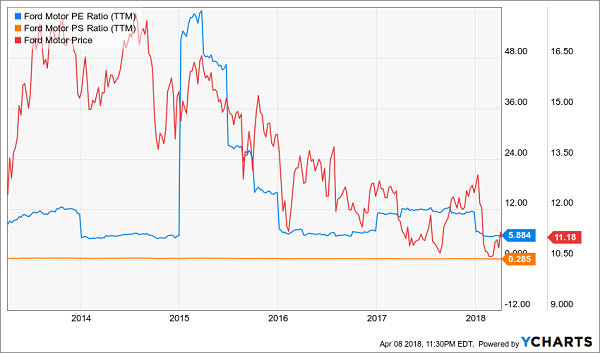 Ford (F) has been an infuriating stock for years. I’m talking about a price-to-earnings ratio (blue line above) in the mid-single digits, a price-to-sales ratio (orange line) of well less than half and an increasingly juicy dividend that’s on par with AT&T (T) at the moment.

The table has been set, but it seems like even when Ford shows promise, nothing happens. Wall Street is being almost stubbornly bearish about the massive automaker.

But not without reason.

Ford made an exciting move in spring 2017, booting CEO Mark Fields and appointing Jim Hackett – long considered a company visionary who is viewed as “the future” thanks to his previous role with Ford’s mobility efforts. Yet, for as exciting as Lyft partnerships and driverless cars seem, the company has considerable issues here in the land of reality.

Moody’s downgraded Ford’s credit rating outlook at the end of January, which heightens the chances of a costly downgrade later down the road, with Senior Vice President Bruce Clark saying, “We expect that Ford’s operating performance will remain under pressure into 2019.” More importantly, he cited a challenge the entire auto industry faces: Namely, trying to figure out how to judiciously invest across a number of emerging technologies as automakers try to determine exactly what the future of automobiles will be.

That, as well as analysts’ estimates for a pullback in overall auto sales in 2018, likely will keep Ford’s stock cheap – and low- for the foreseeable future.

High yields are the cornerstone of a comfortable retirement. A steady stream of substantial income will ensure you can pay the bills and stay afloat when you’ve stopped collecting a paycheck.

That’s why lousy 4% or even 5% blue chips with no growth potential simply won’t do. You need giant dividends of 8% on average, you need dividend growth to beat back inflation – and you if you want to get through retirement without ever touching your nest egg, you also need capital appreciation to keep building your nest egg! In short, you need the “triple threat” stocks in my 8%-yielding “No Withdrawal” retirement portfolio sure can!

How often have you seen a pundit shill for OK-yielding blue chips like Coca-Cola or Kellogg? They’re not bad companies, but they leave you with just 3% to 4% in dividends, paltry payout hikes and little in the way of growth potential. You and I both know that math doesn’t add up. Those 3% to 4% returns on a nest egg of half a million dollars will only generate $20,000 in annual income from dividends at the high end!

My “No Withdrawal” portfolio ensures that you won’t have to settle during the most important years of your life. I’ve put together an all-star portfolio that allows you to collect an 8% yield, while growing your nest egg – an important aspect of retirement investing that most other strategies leave out.