The One Thing You Must Know About Fund Fees

It’s a whopper many investors believe—you may even be one of them.

It’s simply this: all fees are evil.

After all, the more you shell out to line fund managers’ pockets, the worse your return will be, right?

It sounds right. It makes sense. But it’s totally wrong, particularly when it comes to the world of high-yield closed-end funds, which I’ll get to in a moment.

Truth is, you don’t have to go further than the darlings of “cheap” investing—exchange-traded funds—to see how bogus the so-called “wisdom” on fees is. Check out this chart showing the seven-year performance of two nearly identical ETFs—the Vanguard S&P 500 ETF (VOO) and the SPDR S&P 500 ETF (SPY), and keep in mind that VOO has always had lower fees than SPY:

The Cheap Fund Is … the Loser? 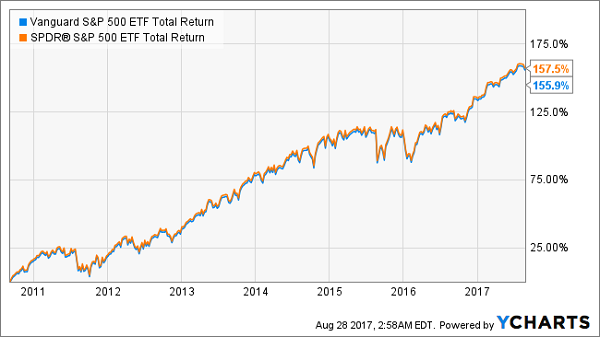 I know this doesn’t look like much of a gap, but the picture changes when you’re talking dollars and cents.

Let’s say you invested a million dollars in VOO in 2010. That looks like a canny move, as you’ve paid lower fees than anyone who bought SPY. Right now, VOO’s expense ratio, or fees as a percentage of the fund’s net asset value (NAV, or the value of the fund’s underlying holdings) is 0.04%, while SPY’s is 0.0945%—or nearly 2.5 times more!

So if you’re looking at fees in isolation, you’d think someone who bought a million dollars worth of VOO saved $545 per year.

The trouble is, the total returns in the chart above are after fees. And after seven years, the person who chose SPY is up $1.575 million, while the VOO investor is up $1.559 million. So if you chose to save $545 per year by choosing VOO, you actually ended up losing $16,000 over a seven-year period!

If that’s not a classic case of forgoing dollars to pick up pennies, I don’t know what is.

So how did this happen?

Fact is, there are small, but crucial, differences between VOO and SPY. A vital—and almost always overlooked—one is the turnover rate, which refers to how often the fund buys and sells stocks on an annual basis.

VOO’s turnover rate in fiscal year 2016 was 4.1%, versus 4% for SPY. That may sound like nothing, but that .1% matters because the fund has to pay commissions and other fees on every buy and sell. That, in turn, boosts the fund’s costs and creates a drag on returns.

But if you obsess over fees and fail to look deeper, you’ll never realize this.

And that’s just in low-fee ETFs!

Now let’s look at some big fee differences, like those between an actively managed fund and a passive index fund.

To be sure, managed funds’ higher fees will cause lower overall returns in some cases. But in others they won’t be a factor at all—and could actually point to stronger returns ahead. (By the way, I recently recommended three funds that are well worth their 1%+ fees and pay up to 9.8% dividend yields. Click here to read all about them.)

So just like when comparing two index funds, we need to go well beyond fees. Let me demonstrate with a real-world example.

JNK also has an expense ratio of 0.40%. While that sounds massive compared to SPY and VOO, it’s actually low for junk bonds. That’s because these investments are harder to track, buy and sell than stocks, and they’re more complicated.

Now let’s stack JNK up against an expensive actively managed closed-end fund specializing in junk bonds: the Credit Suisse High-Yield Bond Fund (DHY), with a 2.2% expense ratio, making it one of the priciest junk-bond funds there is.

Let’s go back to fee-obsessed math. With $1 million invested in each of these two funds, JNK will cost $4,000 per year in fees, while DHY’s fees come in at $22,000. Surely, DHY can’t beat JNK with such high-priced management!

It absolutely can—and has.

You Get What You Pay For 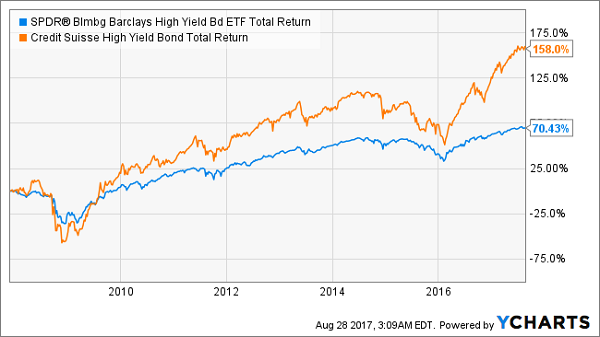 DHY’s total return is more than double JNK’s over the last decade, since both funds have been in existence. And remember that these returns are after all fees are already paid.

Again, let me emphasize that these returns are after fees. That $22,000 in fees was taken out of DHY itself—investors in the fund weren’t sent a bill! So this return happened after both JNK and DHY took those fees out of the fund, and DHY still won by a mile.

So the penny pincher who balked at the fee math ended up with a total return of $704,300 over a decade, while the “careless” investor who looked beyond fees walked away with $1,580,000.

These 4 Funds “Earn Their Keep” AND Pay 7.4% Dividends

I just pounded the table on 4 hidden gems whose fees are all over 1%—but you won’t care a wit because they’re ready to explode for 20% gains in the next 12 months!

And yes, that BIG payoff is after fees.

Because each of these funds is blaring a dead-giveaway signal that is the most bombproof reliable indicator of BIG profits I’ve ever seen.

When it appears, your next move is simple: BUY.

Then sit back as these funds’ prices skyrocket 20% or more in the next year!

You won’t even have to wait that long, because all 4 of these funds pay rock-solid 7.4% dividend yields now (and yes, those yields are also net of fees). So even if these 4 hidden gems simply trade sideways, you’re still set up for a nearly 8% CASH gain here.

I’m ready to give you full details on all 4 of these low-key funds and reveal that 100% reliable profit indicator I mentioned earlier. When you discover what it is, you’ll kick yourself for not having spotted it before!

All you have to do is CLICK HERE to get full details, including the names, tickers and my complete research on all 4 of these powerhouse funds now.