Nick Patterson was one smart dude. Math genius, stats wiz and perhaps the top code breaker for the British government for many years.

But even he couldn’t figure out how his new employer was minting so much money.

Patterson joined up with hedge fund manager Jim Simons and his “math dream team” in 1993. Simons was a renowned mathematician who plucked top academic talent from leading universities in setting up one of the world’s first major “quant” funds.

“Quant” is of course slang for “quantitative.” These guys developed math models and built computer programs that profited from clues delivered by price action alone. Their machines scoured markets around the world for any and every edge (51% would do) and put on a trade when they spotted one.

Usually, their human colleagues didn’t know why! But Simons and his team were smart enough to leave their “employees” alone. And it worked. The team’s flagship Medallion fund, from 1988 to 2018, banked 69% gross returns per year.

But who’s lunch money were the computers taking? Simons knew it wasn’t buy-and-hold investors because they don’t trade that often. These opportunities were created by hectic market participants.

Patterson asked Dr. Henry Laufer, who had just joined the team a year earlier. (Laufer’s a billionaire today, with an estimated $5 billion to his name, thanks to his quant work on Wall Street.) He famously replied:

Laufer was implying that dentists were the day traders of the early 1990s. That they would fix teeth by day, scour the print pages of Investor’s Business Daily by night and put on ill-timed trades the next day in between patient visits.

(My source for this story is a wonderful read by Gregory Zuckerman called The Man Who Solved the Market: How Jim Simons Launched the Quant Revolution.)

Ouch. But keep your head up. If you are a dentist dividend investor—or any income-focused friend, for that matter—we have our own edge that the smartest guys in the room are simply too big to exploit.

The Medallion Fund is closed to new money, the Renaissance High Income Fund is a mutual fund run by the same people. Income investors who bought this fund have enjoyed high-single-digit returns in recent years—a very respectable performance from an income fund.

Did this money come from dentists? Maybe, but not my dentist (dividend-focused) subscribers!

Our contrarian crew likes edges, too. And when we find them, we buy them without apologies. 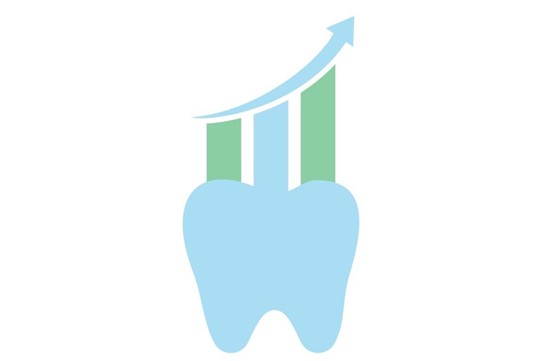 For example, one of our favorite pastimes is purchasing closed-end funds (CEFs) when they trade for ninety cents or so on the dollar. CEFs (unlike ETFs and mutual funds) have fixed share counts. Their prices often wander away from the real worth of the assets they own (net asset value, or NAV). At a given moment, we are often able to find a perfectly good CEF that is trading at a 10% discount to its NAV. 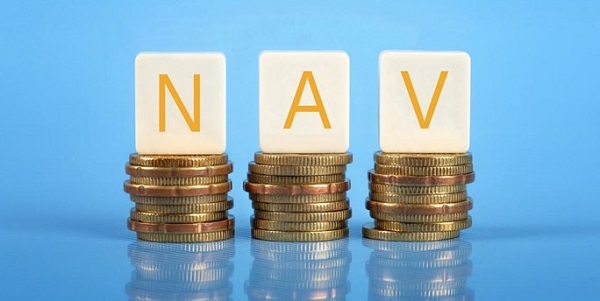 The Flaherty & Crumrine Preferred & Income Fund (DFP) comes to mind. In October 2015 we added the fund to our Contrarian Income Report portfolio because:

I imagine the machines at the Medallion and Renaissance funds would normally be all over this type of opportunity. Except, Medallion manages around $10 billion. So, even though Simons keeps the fund “small” by returning profits yearly, his computers can’t touch DFP and its $600 market cap.

We nimble dividend investors can buy DFP, however—and did then. And no advanced math degree is ever needed to see when DFP is a deal—a simple calculator (or back of a napkin) is plenty.

DFP has doubled up our smart money reference—the Renaissance High Income Fund—returning 93% over the past five years. In the 5.5 years we’ve owned it, DFP has paid out nearly half of our original purchase price in dividends and rewarded us with 114% total returns: 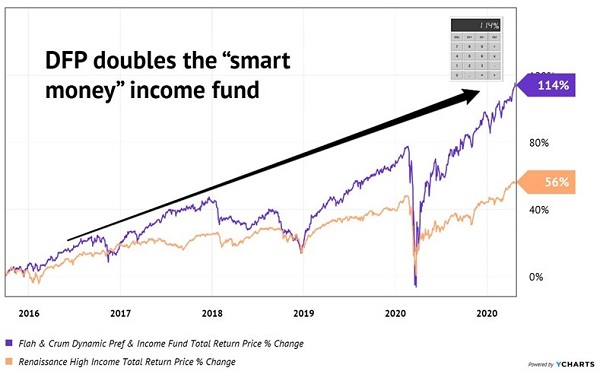 As I write, DFP now trades at a 14% premium to its NAV. Yes, buyers are paying $1.14 for every dollar in assets it holds. Perhaps the mainstream traders and income investors have found their way here.

We welcome their company. We have plenty of other discount windows that we’d like them to shut.

Power to our dentist readers, and all of us as individual dividend investors. And our calculators.

Speaking of which, my number one income play for the rest of 2021 is the next DFP in the making. Whether stocks rise or fall from here, this unique investment is poised to hand us 14% per year, every year, with very little risk. Click here and I’ll share the details.