The Bond Vigilantes Returning? What It Means for CEFs

What a time to be alive! The stock market is booming, and many of our favorite income investments are ticking higher every day.  Surely, they are reflecting the broader optimism that investors have about the US and the rest of the world.

Hold on a sec—my publisher is reminding me that the curfew in my town just lifted on Monday. Seven days of being home by 8pm, following two months of being told to shelter-in-place. As a friend of mine pointed out, we haven’t been double grounded like this since high school.

The news is usually a downer, but these days it’s tough to make it through the headlines without a handful of Xanax. As we’ve been saying since March, we do have brighter days ahead, but it is getting from here to there that we, as a society and an economy, must figure out.

Someday you and I will hopefully solve the world’s problems over a beer. For now, we’re going to focus on our retirement portfolios and dividend-powered income streams. Selfish, perhaps, but our self-interest plays an important role in the economy.

Right now, Wall Street believes that we can allocate our capital anywhere and make money. Everything is going up. (Next time you’re talking stocks at a summer BBQ, remember to point out that you’re not just an investor, you’re a capital allocator!)

Granted, after a March in which everything went down, we expected this across-the-board relief rally. But c’mon, this all seems a bit overdone, right? So, I have to admit, it makes me wonder:

On our May subscriber-only webcast, I noted that Fed chair Jay Powell was doing quite the impression of the infamous 1700s economist John Law, who was the original money printer. (And noted gambler, womanizer, speculator, and creator of multiple manias that included the Mississippi Bubble and South Sea Bubble. Law had quite the resume!)

Powell pulled the lever on the money printing quantitative easing machine early and often in March. Back in 2008, the Fed didn’t get into “extraordinary measures” until things got dicey later that year. Powell skipped the foreplay and tossed a few trillion onto the table. In doing so, all previous records were smashed in the largest money creation event of all-time (as defined by M2, the measure of the amount of money “out there” in circulation):

The Biggest Money Bump… Ever

A cool $2.5+ trillion and counting have been dropped into our collective accounts since March. To put this in perspective, the IRS collects about $3.4 trillion in taxes every year. We printed nearly an entire year’s worth of tax revenues.

The Atlantic’s Derek Thompson reports that, thanks to stimulus checks and higher unemployment insurance, personal income in the US actually soared by 10% in April.

Some market observers point out that, with the absence of sports, couch-bound “degenerates” across America put their stimulus checks directly into their brokerage accounts and began buying stocks. I’m not sure individual investors move the market these days (it’s more of an institutional and computer game), but regardless, there’s a lot of new money sloshing around right now.

Recent action in the 10-year Treasury is reflecting this. And hey, what a strange world we live in. Did you ever think we’d be worried about a breakout above 0.8% in the 10-year yield? Yet, here we are, making a “worrisome” run towards 1%!

Are the “Bond Vigilantes” Finally Waking Up? 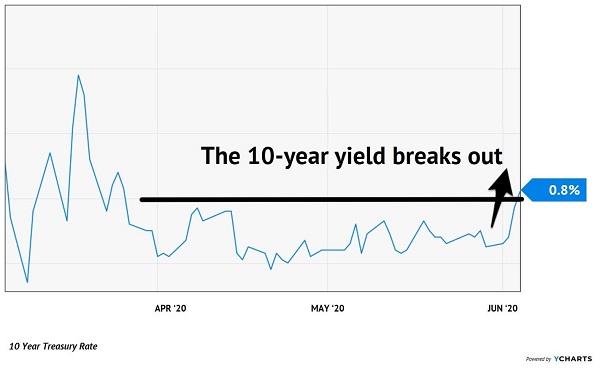 “I want to come back as the bond market. You can intimidate everybody.”

Carville’s original quote paid homage to a powerful (yet somewhat mythical) group called the “bond vigilantes.” The greater the risk in the system, the higher the yield bond buyers demand to lend their money. No risk skates past them without a fee.

In the early 1990s, bond yields seemed to spike whenever the federal government was tempted to spend beyond its means. These higher “vigilante powered” rates punished the reckless spenders in Washington with higher debt costs—and ultimately pressured them towards austerity.

It’s an election year and this recovery is probably going to need some additional monetary juice to keep going. And by “some” I of course mean a trillion or two (or three—another year’s worth of tax receipts!) more clams.

Bond vigilantes or no, my bet is that the stimulus will be there. Whether it comes as a formal federal relief program or a backroom Federal Reserve deal, the printing presses won’t cool down until the crisis is over.

Of course, a spike in the M2 money supply doesn’t necessarily correlate to inflation. In fact, in recent decades it hasn’t predicted much at all! Our biggest experiment, 2008, had many pundits predicting inflation “soon” after the crisis ended and the economy recovered. It never happened, and the Ben Bernanke-led Fed was largely lauded for its actions as a result.

Personal incomes are still going to take a hit at some point when the gravy train slows down. And we’ll once again see deflation take the upper hand, and perhaps a pullback in stocks to accompany this. When our current stimulus runs out, some of this newly found capital will return to “Money Heaven” in the sky: 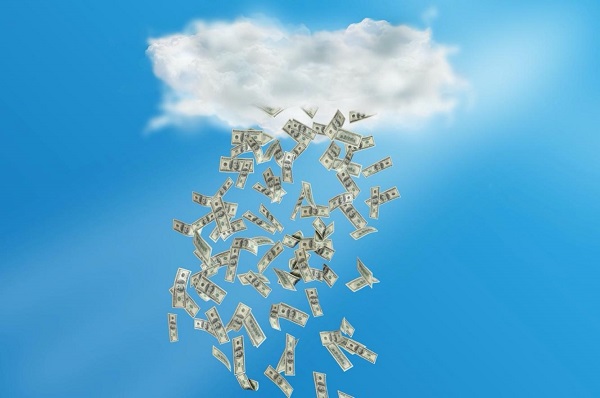 We’ll keep an eye on this situation for the rest of 2020 and beyond. If and when we do see inflation kick in, it’ll be time to reposition our bond portfolio.

Specifically, we’ll be looking to sell our fixed-rate bond holding CEFs (which lose value if rates rise significantly) and replace them with dividend-paying stocks and floating-rate CEFs (which will rise in value faster than inflation and provide us with income streams to boot).

Urgent note from the publisher: Brett’s colleague Michael Foster, editor of our CEF Insider service, stays glued to anything and everything to do with CEFs.

He’s just released a new “crisis-proof” CEF portfolio that’s perfect for these uncertain times. The 5 funds contained within pay an outsized 8.7% dividend yield, nicely complementing the in depth analysis you already receive from Brett. And, unlike most S&P 500 stocks, these 5 funds are still cheap today—so cheap they’re nicely set up for 20%+ price upside in the next 12 months!

If you’re looking to protect your CEF income stream from inflation, deflation and everything in between, you’ll want to take a close look at these 5 new picks. Click here to get full details on all 5 of these life-saving funds and take CEF Insider for a no-risk test drive for 60 days!