When the “Bond God” Jeffrey Gundlach speaks, we income seekers listen. And recently,  the preeminent yield guru on the planet shared his favorite stock idea with a private audience.

I’ll share the specifics on his recommendation in a moment, including the exact “pair trade” that Gundlach likes. But first, let’s recap why we care what he says.

When Gundlach speaks, he often takes heat from his peers and the media because his calls run contrary to popular belief. But he’s usually right – and profitable:

We also profited handsomely from Gundlach’s prescient early-2016 call on closed-end funds (CEFs). At that time, he said:

“Closed-ends are one of the best plays on the Fed not raising interest rates. Investors have been afraid to own them because they fear that the Fed has launched a tightening cycle.

My Contrarian Income Report subscribers were already buying out-of-favor CEFs when the Bond God decreed they were a deal. I liked them for their high yields (many paid 8% or more) and their generous discounts (which gave them 15% to 20% price upside to boot).

We bought four CEFs in five months beginning in January 2016. And this “Bond God four-pack” has indeed delivered for us – with total returns up to 58% in less than 2 years!

When We Were Bond Gods 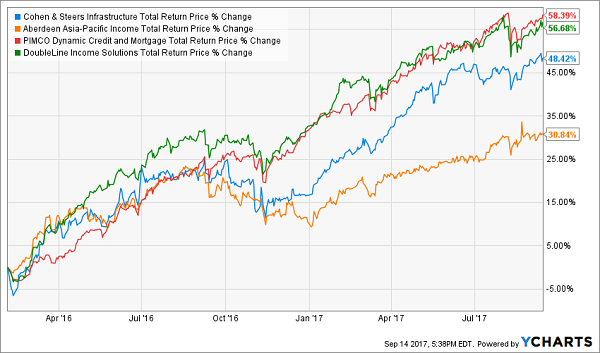 Has the easy CEF money been made? In most cases, yes. But there’s one bargain sector left, which just happens to be the focus of Gundlach’s latest recommendation.

Now he says “buy emerging markets and short the S&P 500.” He explained why to CNBC:

With emerging markets trading at cheap valuations versus elevated levels for U.S. stocks, the trade makes perfect sense. But if you’re looking for yield, you’ve got two big problems:

But we can do better and bank 6%+ net yields while still following Gundlach’s advice. We’ll simply use his favorite vehicle, CEFs.

Closed-end managers have a couple of major advantages over their ETFs counterparts. While ETFs tend to buy individual stocks and mirror the market, CEF managers tend to have wider mandates and longer leashes. A top manager takes advantage of this flexibility to generate alpha – returns attributed to acumen as opposed to whatever the market is doing.

A savvy closed-end manager can also borrow cheaply and juice returns. CEFs borrow at rates tied to Libor (the London interbank offered rate). It makes sense to borrow cheaply with the international benchmark at just 1.15% to buy bonds that pay more – as many emerging country issues do.

Meanwhile closed-end investors like you and me have a major advantage over our ETF counterparts, too. They, by definition, pay fair value for their shares because ETFs can issue additional shares whenever they want.

CEFs, on the other hand, have a fixed share count, with their funds trading like stocks. As a result, from time-to-time a fund will fall out-of-favor and find its shares trading at a discount to its net asset value (NAV).

This is basically “free money” because these underlying assets are constantly marked to market – meaning they’re on the books at fair value. If a CEF owns a bond, that issue has a current price for which it could be sold immediately to someone else.

Here are five “free money” emerging market CEFs that the Bond God would consider if he could. Their yields trounce EEM, and the funds sell at generous discounts to boot:

Why can’t Gundlach buy these CEFs? It’s the curse of managing $80 billion – if he started buying these issues, he’d move their prices higher before he was able to establish a meaningful stake!

Fortunately you and I don’t have this problem. We can buy whatever CEFs we want and to capture value and free money discounts.

Which is why bargain closed-end funds remain a cornerstone of my 8% “no withdrawal” retirement strategy, which lets retirees rely entirely on dividend income and leave their principal 100% intact.

Well that’s not exactly right. Their principal is more than 100% intact thanks to the types of 30%+ price gains I mentioned earlier! Which means principal is actually 110% (or even 130%) intact after year 1, and so on.

And I talk to management, because online research isn’t enough.

Which emerging market CEF is my favorite? Out of respect to my paid subscribers, I can’t say here. But I can give you the opportunity to find out my top Bond God emerging market bargain.

I’d also love to share three more “blue chip” closed-end funds that I like as best income buys today. And wait ‘til you see their yields! These “slam dunk” income plays pay 7%, 8% and even 9% dividends.

If you’re an investor who strives to live off dividends alone, while slowly but safely increasing the value of your nest egg, these are the ideal holdings for you. Click here and I’ll explain more about my no withdrawal approach – plus I’ll share the names, tickers and buy prices of my three favorite closed-end funds for 7%, 8% and 9% yields.