Junk bonds can be a great source of retirement income, or a terrible idea altogether. It depends what you buy, and really, which managers and vehicles you entrust to find value in the bargain bin.

There’s a right way to do it, and a wrong way. Let’s start with the latter, led by the popular iShares iBoxx $ High Yield Corporate Bond ETF (HYG) and SPDR Barclays High Yield Bond ETF (JNK) – the two largest junk bond exchange-traded funds (ETFs), and both top-10 fixed-income ETFs by assets under management.

You and I can do better than these dumb ETFs. They are popular thanks to their low fees. But as is often the case in life, they are “cheap for a reason” – check out these three superior junk-focused funds, run by savvy humans, who have crushed the computers:

These 3 CEFs Are Racing Past HYG and JNK 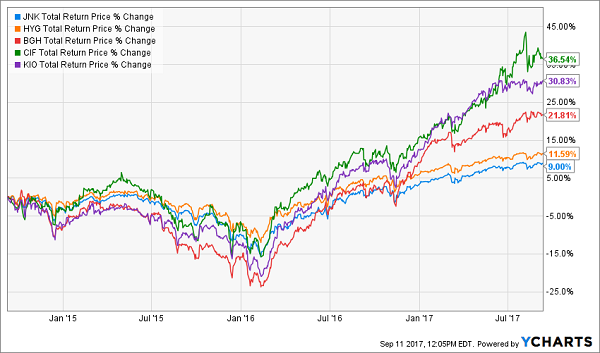 The MFS Intermediate High Income Fund (CIF), at a distribution rate of more than 10%, certainly is on the high end among junk bond CEFs. But it’s hardly an outlier when it comes to out-yielding HYG (5%) and JNK (5.1%) – most junk closed-end funds dole out considerably more income, in part because they can use leverage to help juice both performance and distributions.

For instance, a quick look at CIF’s portfolio structure is worthy of a double-take: That’s because high-yield corporate bonds are listed at 125% of the portfolio – not to mention, it also has small allocations to investment-grade debt, emerging-market bonds and a couple other assets. That’s a reflection of the fund’s significant leverage.

That said, from a holdings standpoint, CIF is hardly overaggressive. It features an average effective maturity of 6.8 years and an average effective duration of just under five years (hence, intermediate), and top holdings include the likes of Six Flags (SIX), Freeport-McMoRan (FCX) and First Data Corp (FDC). Its largest allocations are to BB- and B-rated debt (Standard & Poor’s ratings), at 60% and 57%, each. CCC-and-below debt makes up just 13% of the fund’s assets.

Thus, MFS’ yield is getting help from the use of leverage … but not a garbaged-up portfolio.

For one, you get a little international diversification. The “global” identifier tells investors that this is a U.S./international mix, as opposed to “international,” which typically means ex-U.S. And is typically the case with global funds, the American holdings are pronounced – BGH is roughly 70% weighted in junk debt. Still, you also gain double-digit exposure to British bonds, as well as low-single-digit holdings in a few other developed countries, so you’re not entirely beholden to the U.S.

Then there’s the short-term nature of this fund. BGH’s holdings have a weighted average duration of just two years, which really cuts down on the risk that these debts will default. But given that the vast majority of this portfolio sits in B-rated debt (Moody’s), the second-highest tier of junk debt, default isn’t a huge concern anyway.

Despite its short-term nature, BGH still yields more than 9% — extremely favorable compared to ETFs such as the SPDR Bloomberg Barclays Short Term High Yield Bond ETF (SJNK), which has a similar duration but a mere 5.2% yield.

Last up is a blended fund that’s still primarily junk debt, but also throws in a few other high-yield assets for diversification’s sake.

The KKR Income Opportunities Fund (KIO) is roughly 60% invested in junk debt, with another third of the fund going toward leveraged loans, and trace amounts of preferred and common stock. And while the name doesn’t indicate it, KIO even boasts a little geographic diversification; The USA makes up 83% of the fund, but another 10% is British, and Luxembourg and Canada are among the six remaining geographic allocations.

Maturity (7.7 years) is a bit long in the tooth, and quality isn’t ideal (56% in S&P B-rated debt, but 30% in CCC or below). However, KIO does feature a fantastic blend that has no single industry weighted at any more than 10.2% (banks) at present. Top issuers aren’t terribly concentrated, either, with Ally Financial (ALLY) tops at 5.3%.

And KIO has been an absolute Fed-buster over the past year, roughly tripling the performance of both the HYG and JNK.

3 Closed-End Funds for an Income-Rich Retirement

These picks make it clear that closed-end funds are a total return dream. That’s exactly why CEFs are a cornerstone of my 8% “No Withdrawal” retirement strategy, which lets retirees rely entirely on dividend income and leave their principal 100% intact.

OK, that’s not exactly accurate. Retirees’ principal will actually end up more than 100% intact thanks to the powerful price-gain potential in my “No Withdrawal” CEFs. This means you can expect 110% principal after year 1, and so on!

Online research isn’t enough. I also talk to management and track insider buying to make sure these guys have real skin in the game.

Today, I’m laser-focused on three “blue-chip” CEFs that are better income buys than most stocks on the market. Not only do they offer diversification that single equities can’t, but they pay anywhere between 8% and 10% in annual distributions!

Better still, they trade at 10%-15% discounts to their net asset value (NAV), which is perfect for your retirement portfolio because that minimizes your downside risk! Even if the market takes a tumble, these top-notch funds will simply trade flat … and we’ll still collect those fat dividends!

Don’t stress through retirement as you slowly claw away at your savings. Live on dividends alone while boosting the value of your nest egg, Click here to get my “No Withdrawal” picks – and I’ll share the names, tickers and buy prices of these 8%-10% dynamos!