I stopped pulling my suitcase and fumbled for my phone. “Owens.”

“Hey buddy,” I replied to my childhood friend. “If it’s loud… well I’m in Vegas. On the Strip actually, walking to my hotel to check in.”

It was almost 80 degrees. Your income strategist was sweating through his shoes and pants and, more concerning, he’d forgotten his hat—which meant the top of his increasingly exposed head was being slowly but surely sizzled by the desert sun.

But “shortcuts” back through the casinos would require re-masking up, per Nevada state law. Plus, they are loud. And my boy wanted to talk about cryptos, even though he’d done very little investing through his entire life.

“Let’s say I just put a grand into Ethereum…” he went on, describing a hypothetical example that I figured was 100% real-life.

Everyone wants to talk crypto these days. Just the week before we’d fielded questions about potential Bitcoin plays from normally reserved dividend-focused subscribers in our most recent webcast.

Let me repeat what I said then. As a trade (holding period: weeks to months), crypto is fine. We can buy and sell anything with a price, so long as we don’t overstay our welcome.

As an investment (holding period: years), I prefer tollbooth companies that will prosper on the crypto (and general) trading boom. Think backbone platforms that profit every time a newbie trader slams the “Buy” button in Robinhood (HOOD), Coinbase (COIN) or good ol’ TD Ameritrade (recently purchased by Charles Schwab (SCHW).)

We can think of platforms as the “pick and shovel” providers of the current trading bonanza. The term comes from the entrepreneurs who made the real money in the California gold rush—the store owners who peddled picks, shovels, booze and “entertainment” to the gold miners themselves.

COIN is a bit mainstream for me as a crypto platform. I’ve been watching lesser-known Bakkt Holdings (BKKT), which doesn’t pay a dividend but is owned by a company that does.

BKKT was founded in 2019 by serial entrepreneur Jeffrey Sprecher. Jeff is our kind of businessman. He solves problems, and in doing so he creates new profit streams—the kind that double his investors’ money every few years.

I also like his style. He puts one foot in front of the other, but the sum of his journey is a gigantic move. For example, in 2005, he took his five-year-old business public on the New York Stock Exchange. Seven years later, he bought the entire NYSE.

His “mothership” firm Intercontinental Exchange (ICE) yields 1%. Newbie investors see this and yawn—which is too bad for them.

This is anything but a drowsy dividend because it’s growing quite fast and pulling ICE’s share price up with it. The company initiated its payout in 2014 at $0.14 per share. Seven dividend raises later, the stock’s cumulative 154% dividend growth has fueled a share price that has tripled over the last seven years.

The secret has been Sprecher and his consistent innovation on the ICE platform. He founded the company as an energy trading system two decades ago. In the coming years, he has continually expanded:

As ICE’s platform extends, it rakes in more and more free cash flow. And Jeff is generous with his piles of cash. He recently gave shareholders another 10% dividend raise. His pattern of extending his platform and raising ICE’s payout has become a beautiful virtuous cycle:

Stock Price and Payout Both Way Up with ICE Platform 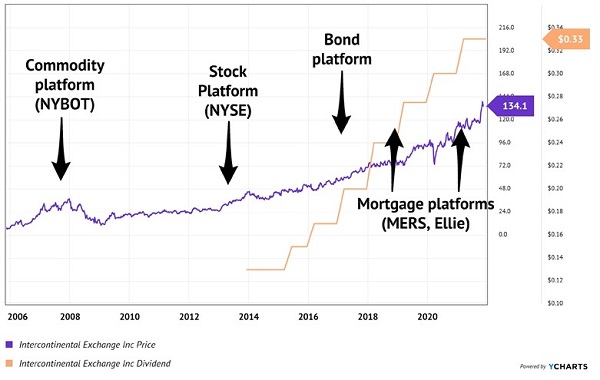 If you’re a Hidden Yields subscriber, you already appreciate Jeff. We’re sitting on 30% total returns (including dividends) already from our August 2020 purchase of ICE.

ICE has rallied a bit beyond my recommended “Buy” price here. Let’s sit tight and look to add more on dips below $132 while we focus on other dividend growth stocks that haven’t soared just yet.

Speaking of which, if you’re looking for dividend payers that can appreciate 30% in the next year or so, I recommend seven “Great American Reset” dividend stocks.

Like ICE, these seven dividend growers form the backbone of the new American economy. A great “reset” button was pressed in 2020—and these seven stocks are slated to be winners.

Unlike ICE, they haven’t soared—yet. But they will soon. So, if you want to make money, don’t wait to buy them. Let me share my seven favorite Great American Reset dividend stocks with you right now.