Perfect Dividends for the Roaring (or Recessionary?) 2020s

Are we kicking off another episode of the “Roaring 20s” today?

Who knows. Nobody really predicted the 2010s would be an end-to-end bull market. Yet the most hated rally of all-time resulted in stocks nearly quadrupling: 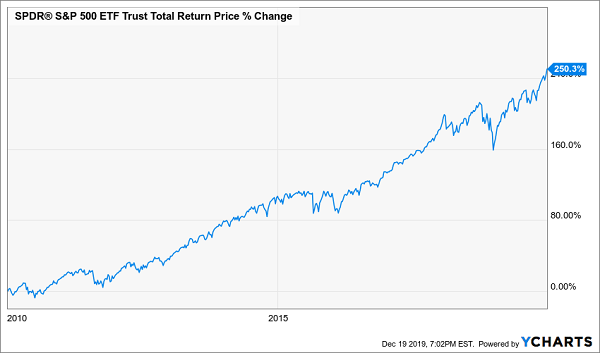 A million bucks that sat in a boring S&P 500 fund a decade ago would have grown to $3.5 million. Unfortunately, many experienced investors did not participate in this full rally, still being shell-shocked after 2008.

(Which illustrates why it is important to always be fully invested. Investors who slept through the ’08 carnage quickly made their money back in the years to follow. And smart dividend investors slept particularly well, and made their money back even faster. We’ll talk income stocks for the 2020s in a minute.)

Fast-forward to today, and common sense might now indicate that we are “due” for a pullback, a recession, or at least a breather. Then again, the stock market is hitting all-time highs, and true bear markets do not typically follow on the heels of records this closely.

So, what are we careful contrarians to do? If we flip to cash now, we are likely to miss many months (and perhaps years) worth of income and compounding opportunities. These are not easily made up soon—if ever. And besides, we’ve talked about broader market timing before. The problem most permabears have is that, even if they know when to flip to cash, practically no one successfully gets back into the market (and that includes “professionals!”).

Let’s revisit January 2010 again. The market has been in furious rally mode for 10 straight months, and nobody really thought it was the start of a new bull market. “Head fake,” “dead cat bounce,” or “sucker’s bet?” Sure! But new bull run? Nah, anyone suggesting “higher stock prices” was laughed off. The scoffers’ million bucks then is barely over $1 million now after a decade of “waiting for the next shoe to drop.”

But I get the worries. We hear the phrase “late cycle” over and over when it comes to our economy, and it’s tough to get it out of our heads. So I’m going to propose a compromise.

Let’s buy safe “decade-long worthy” dividend stocks that rally whether the market goes up or down.

Here’s a little back-of-the-envelope backtest. Let’s rewind January 1, 2010 two more years from the start of 2008. If we’d bought an S&P 500 index fund heading into this bear route, we’d still be OK today. All stock market wounds heal, given enough time. But we don’t have “enough time.” Our goal here is not to be merely “OK”—it is to grow wealthy and retire on dividends.

So, let’s rewind and instead look at what would have happened if we had bought three of our favorite dividend-paying stocks. We’ve owned all three in our Contrarian Income Report portfolio at various times, enjoying yields up to 10% with total returns up to 105% along the way.

Total Returns Up to 6X, Including Fat Dividends 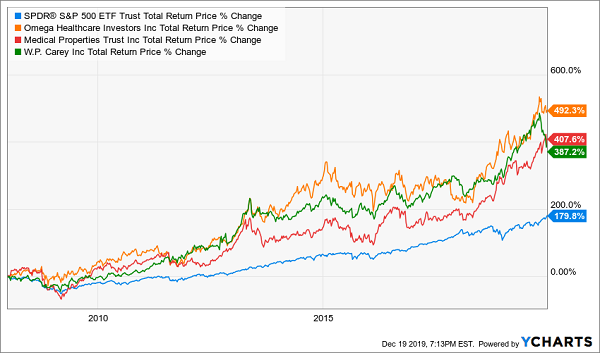 Rather than make this another lame (but essential!) lesson about long-term investing, I use this illustration to show the importance of picking the right stocks. OHI, MPW and WPC all shared three key qualities that made them slam dunk holdings over the last twelve years.

First, they paid big dividends throughout the last dozen years, including the “cry for your mama” crash. On average, these stocks yielded no less than 5% and they paid 10% or more during brief bouts of “bleak outlooks.” But these pessimistic periods turned out to be screaming buying opportunities—even better than buying and holding since ’08!

Second, they raised their dividends consistently. Over the last five years, OHI, MPW and WPC boosted their payouts by 26%, 18% and 9% respectively. Nothing spectacular, sure, but hikes don’t have to be when the yields are already so high. Show me a high-paying stock with a climbing dividend and I’ll show you shares that only have one way to go—up!

Third, all three firms had (and still have) well-positioned business models. OHI owns skilled-nursing facilities, which have higher demand from the greying of America. MPW provides financing to hospitals, a recession-proof business if there ever was one. And WPC is a landlord to industrial complexes, including warehouses, which have boomed with the online shopping (and shipping) world.

I realize that Amazon.com (AMZN) is a great disruptor of business models, and many “brand name” firms of yesteryear are suffering today. But there are still plenty of profitable niches being fulfilled by publicly-traded dividend payers, and these are the stocks we want to own for the next decade.

I’ll get to my favorite 10-year ideas in a moment. First, what don’t we want to buy and hold through the 2020s? Probably, plain old bonds (not the lesser-known and better way we like to own bonds). While there will continue to be money making opportunities in fixed income (there always are), it’s unlikely that 10-year Treasury yields are another 2% lower ten years from now. In fact, that’d put them at zero! 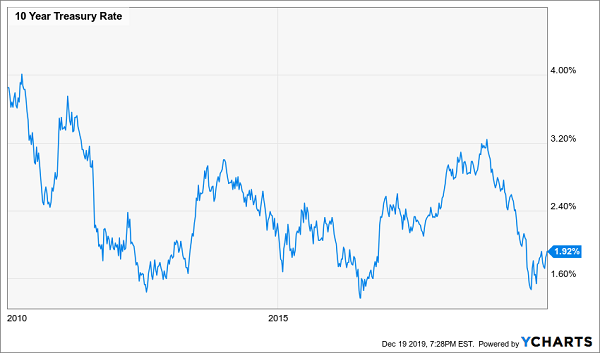 Is it possible that bonds are the surprise this decade that stocks were last decade? That rates do go to zero and there is still money to be made off of bonds? Sure, anything is possible. But it’s important to consider that the upside you may see from an increase in bond prices is capped, because a further decrease in rates is running out of room.

Bull or bear, we don’t really care because our big dividend payers will support our stock prices either way.

This is what I’m talking about when I say “perfect income buys.” And as we kick off the new year and decade, there are three specific investments we should be considering right now for:

Can I share more? Please click here and let me explain my 2020 Perfect Income Portfolio in detail.