Name a Bond Fund: It’s Probably Down. Here’s Why.

If you own a bond fund, it’s probably down in recent months. Let’s talk about why and walk through three popular fixed-income ideas from worst to first.

We’ll start with the iShares 20+ Year Treasury Bond ETF (TLT). TLT is the knee-jerk investment that many “first-level” investors buy when they are looking for bond exposure. Unfortunately, there are two big problems with TLT:

Any kid knows that 19 years is “way too long” to hold a bond when inflation is running a hot 7.5%. (Please, somebody get these TLT investors a Contrarian Income Report subscription!)

Over short time periods, most fixed-rate bond funds trade opposite long-term Treasury rates. When rates take off, bond prices suffer. TLT—with its low yield and long duration—has especially suffered as the 10-year has run up to 2%: 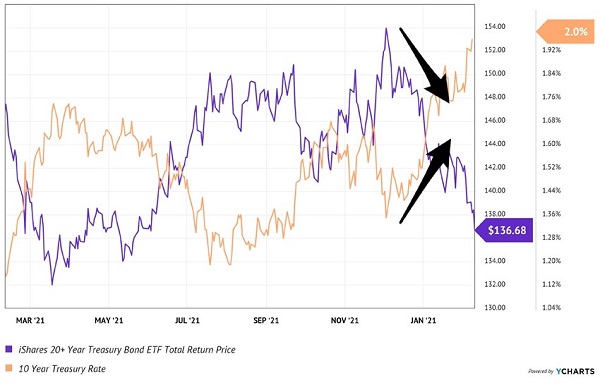 The most popular high-yield bond fund in the world, the iShares iBoxx $ High Yield Corporate Bond ETF (HYG), also broke down recently as long rates broke out. The 10-year rate is becoming competition for HYG.

We recently lamented that HYG never paid so little. When we last discussed the fund in December, its yield was crushed to 4%.

With the 10-year now at 2%, mainstream income investors—the types that buy vanilla funds like HYG—have begun to question themselves.

“What’s the point?” they ask, two months after we posed them the same question. 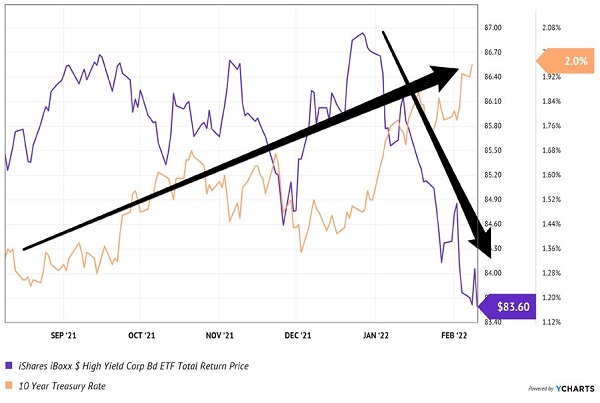 Rising interest rates tend to impact bond prices because of the “coupon competition” they provide. Income investors become impatient with their current holdings, which don’t look as good on a relative basis. Their selling pressures prices lower.

With the 10-year at 2%, there is zero reason to be locked into TLT for 19 years (nine more than just buying the 10-year itself!) at about the same yield. Something must give, and I bet that TLT continues to fall as investors demand more yield.

It’s a similar story with HYG. Granted, HYG has fared better over the past year, roughly treading water versus a 5.5% loss for TLT, including its payouts.

HYG’s “secret” was its higher yield, which now sits at 4.5%. That’s not as big a yield cushion (above the 2% “risk free” 10-year rate) as we contrarians would like to see, but it’s certainly better than TLT.

Plus, HYG’s average “duration” is more palatable. At just four years, the high-yield fund’s bonds don’t make it the sitting duck that TLT is. The iShares folks are cycling into higher paying bonds faster—much faster, at four years versus 19!—which protects the fund’s yield and the overall share price.

Now before we gush too much about HYG, let me present DoubleLine Income Solutions Fund (DSL). While DSL has also struggled with the recent rate moonshot, it’s a better bet than TLT, HYG, and heck, most bond funds over the long haul. There are three reasons why.

Second, these bonds are handpicked by the “bond god” himself, Jeffrey Gundlach. (When the bond king Bill Gross retired from PIMCO, he drove up the freeway to Gundlach’s 13,000-square-foot mansion and asked for a job!)

Gundlach gets the first call on these sweet fixed-income deals. When we buy DSL, he’s working for us.

Third, thanks to Gundlach and his all-star team, DSL’s portfolio duration averages less than four years. The nimble fund yields an excellent 8.4% today. Which bond fund would you buy? It’s an easy choice:

Sure, DSL’s price has been under pressure from the 10-year lately, too. But let’s look at the big picture view. For 40 years, long rates have trended lower and lower. Do we want to ditch DSL and bet against this megatrend?

The 40-Year Downtrend in Long Rates 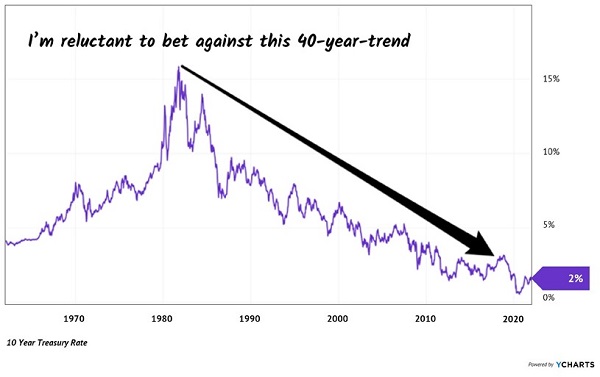 I don’t think so. Besides, what will happen on the other side of these Federal Reserve rate hikes?

Probably a recession in 2023. Which means long rates will decline again when the economy slows. What rates go up, must come down, and this 8.4% “bond god” approved yield will look darned good!

And hey, if you’re worried about getting nickel and dimed between here and 2023, why not buy some dividend stocks that will return 100% or more in the years ahead?

I don’t know about you, but there’s nothing like watching a dividend stock double in price. It sure helps take my mind off life’s other problems!

These seven Hidden Yields stocks are the most likely to double in the year ahead. Most importantly, they’ll gain no matter what happens with the broader market—even if it’s a roaring bear.

Need 15% per year, every year? Bull or bear? Click here for a special no-risk test drive of HY, and I’ll send you these seven stocks and tickers right away.