Here’s something that might surprise you about gold: closed-end fund (CEF) managers—at least those I speak to—pay little attention to it.

We’ll dive into why right now. Then I’ll show you three gold CEFs you need to keep away from your portfolio. Because gold’s future looks nothing like the rosy past gold bugs love to use to justify their lust for the yellow metal.

So why do most CEF chiefs (not to mention celebrated investors like Warren Buffett) shun gold?

The short answer is that gold doesn’t produce anything. So when you buy it, you’re speculating that someone will buy it from you for a higher price in the future. This is different from a house, say, which you could rent out, or a company, which produces goods and services—and therefore revenue and (hopefully) profits.

“But,” the gold bugs always counter, “someone will buy gold at a higher price.”

And if you look at history, you can see why they say this. 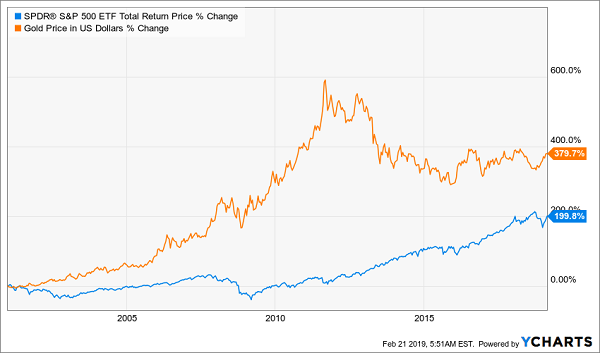 Charts like these feed a gold bug’s addiction to the shiny metal. And it’s undeniable that gold was one of the best-performing assets of the 2000s. Even with the drop you see above, from 2012 on, you’d be in a great position if you got in early enough.

Too bad this chart is misleading without context. And that context is China.

The fact is, the last two decades have been unusual for gold, due to a shift in China’s approach to the yellow metal. To explain that, let’s look at a bit of history.

From 1950 to 2000, the Chinese Communist Party restricted the buying and selling of gold in China. That’s important, because gold has had a greater significance in Chinese culture than in the West.

Then the World Gold Council and Beijing’s National Economic Research Institute published a report showing the value to China in opening its gold market; the government took that advice and began decriminalizing gold purchases in early 2001.

Keep in mind that before 2001, China’s GDP and the wealth of its citizens was so small that, even if it had been legal to buy and sell gold, this would not have made a dent in global gold markets, unless China’s economy was allowed to grow at the same time in other ways.

The obvious conclusion here is that the spike in gold prices from 2001, which really only got going in the mid-2000s, when China’s economy had grown to that of a middle-income nation, is more the result of newly rich Chinese creating new demand for the metal.

“Pre-China” Gold Is a Better Benchmark: and It Doesn’t Look Good

Before China was big enough to affect the market, gold’s performance was poor. Look at the 18 years before the 2001 China decriminalization: 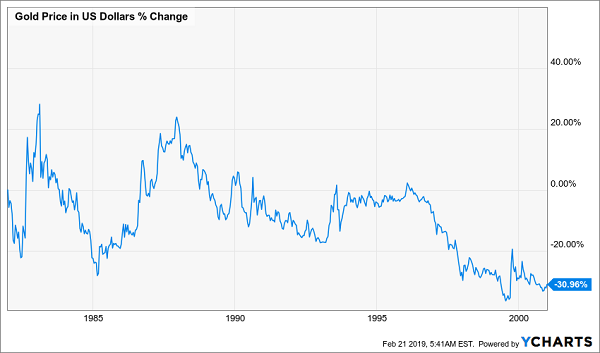 While the 1970s showed gold exploding again (it surged 1,426% in that decade), the metal hadn’t risen from when America abandoned the gold standard in 1933 until 1970, when the link between the US dollar and gold was cut.

The fact that the 1980s and ’90s showed no rise in gold indicates that the metal’s rising value from the end of the gold standard was already priced into the market—just like the lack of a rise since 2011 until today shows that rising demand from China is also priced in.

Which, unfortunately, makes gold one of the worst speculative investments now (though maybe not as bad as cryptocurrencies, whose connection to value is even more tenuous).

With gold such a poor investment in the last near decade, it’s no surprise that many of the worst-performing CEFs of recent years have been gold-focused.

Take the GAMCO Global Gold Natural Resource and Income Trust (GGN), which invests 40% of its assets in gold-related stocks and two-thirds of its portfolio abroad. Its total return since inception just went negative—even after riding the mid-2000s wave of pent-up China demand:

GGN Is a Dud 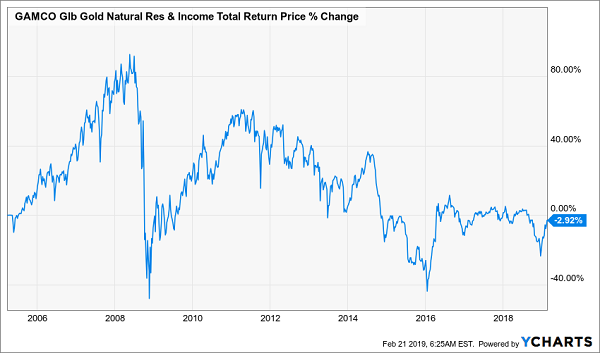 And income? GGN has cut its dividend five times, meaning payouts today are over 60% lower than they were when this fund got started.

A worse performer is the ASA Gold and Precious Metals Fund (ASA), which invests 85% of its assets abroad and has 99% of its portfolio in mining stocks, mostly gold miners. This fund is down 16.3% since GGN’s 2005 IPO, while payouts are down a shocking 99% since ASA’s own IPO.

ASA is still up decently since 2001’s China liberalization, but far behind gold itself:

A One-Time Winner, Now Made Humble 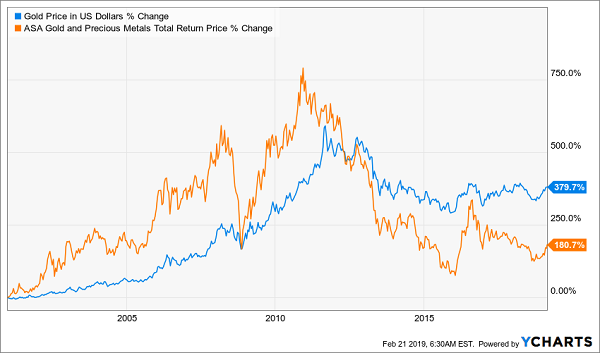 ASA was a great way to play the rise of Chinese gold demand, and anyone who exited either before 2008 or in 2011 should be congratulated—but the CEF’s heyday is well past.

Finally, let’s turn to the BlackRock Resources & Commodity Strategy Trust (BCX), which has a third of its assets in mining (with some gold), a third in energy and another third in agriculture. This diversified approach to commodities obviously suffered from 2014’s oil crash—but BCX was struggling before that, having delivered a negative return since its IPO while slashing dividends constantly (they’re now 80% smaller than they were when BCX debuted):

BCX: In a Deep Hole for Years 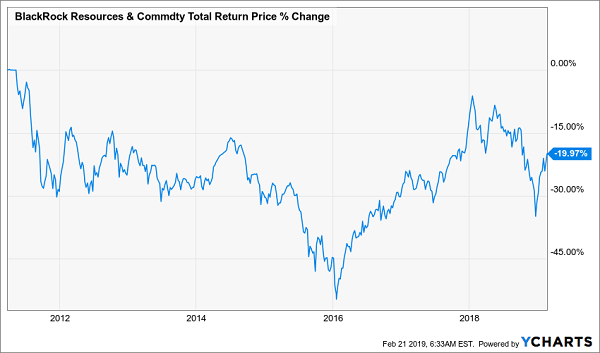 So what’s the takeaway? If you want to speculate on gold, it’s crucial to keep on top of the political and economic shifts that affect it—and you’ll need to be patient.

But if you want high cash flow and an investment that grows, investing in companies that produce goods and services (and the sales and profits that go with them) is the only way to go.

Yours Now: 8.3% Dividends and Big Gains From America’s Top Stocks

The best way to buy these stocks is through a CEF, like the five throwing off fat 8.3% average dividends I’ll reveal when you click right here.

Because of a massively profitable “quirk” in their structure that lets them trade at a discount to the value of the stocks they hold. This is called the discount to NAV—and if it sounds like getting free money to you, that’s because it is!

Take the first CEF I’m going to give you: it holds some of the top stocks in the pharma and biotech sectors and has clobbered the market, with a monstrous 904% return since inception:

This Market-Slayer Is Still Cheap! 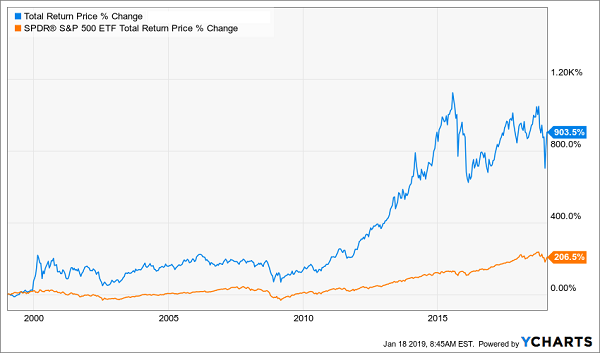 Plus, this fund throws off an incredible 9.8% dividend!

Normally you’d think the biggest gains have already been made here. But that’s far from the case—and we can thank our trusty discount to NAV for that. Because as I write, this fund, which has traded at fat premiums many times in the past, goes for a 7% discount.

That gives us even more “bounce back” upside while we pocket that huge 9.8% dividend!

The name of this fund and all 5 of these outstanding CEF picks are waiting for you now. All you have to do is click here and I’ll give you full details—names, tickers, buy-under prices and more—on each and every one of them.