And if you invest in closed-end funds (CEFs)—and you should—there’s a lot to look forward to.

In a moment, I’ll show you the one type of fund not to buy in 2018—and give you a simple 2-step plan that lets you zero in on the funds set to outperform the market and deliver you outsized dividends, too.

First, I want to give you my prediction for the market as a whole in 2018. You’ll be pleased to hear that a lot of the things that made 2017 fantastic for investors are still in play as we roll into the new year.

2018: Another Banner Year for Investors

Even though 2017 was a monster year for stocks, you probably heard plenty of bearish worries as the year kicked off 12 months ago. I certainly did—which is why I kept writing about how the market was very strong, and it was time to buy.

But now it seems everyone has caught up with me.

Credit Suisse says stocks will rise 12% in 2018, while Citi analysts say a more modest 5% is in the cards. JP Morgan, Oppenheimer and BMO Capital side with Credit Suisse, seeing around 11% to 12% gains in the year ahead.

Those calls make a lot of sense this year, and I think 11% to 12% could even be too conservative.

My bullish conviction is based on one strong piece of evidence—and it’s the same thing that’s driving those analysts’ bullishness: earnings growth. Analysts see a roughly 8% jump in earnings per share for S&P 500 companies this year, and that’s going to help stocks continue their rise.

Because this is the exact same earnings performance I expected in 2017—and it’s exactly what we got. That’s why the benchmark S&P 500 SPDR ETF (SPY) did this: 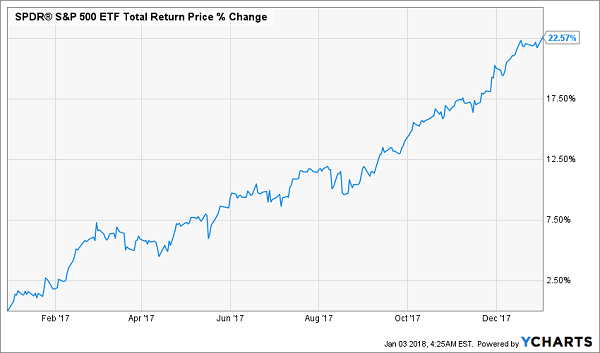 And these funds can teach us a lot about which funds to buy in 2018—and which to avoid.

In total, 7,751 funds beat SPY, of which 614 were ETFs. The best of those were actively managed or use a “smart beta” approach that automates stock selection based on complex criteria designed to beat the market. The top-performing unleveraged ETF of 2017 that trades on a major exchange was the actively managed ARK Web x.0 ETF (ARKW), which rose a shocking 93.2% last year.

I mentioned this fund’s breakneck performance in a November 20 article, alongside several other top-performing funds with a similar focus: technology.

And it’s undeniable that technology was where to put your money in 2017; just putting your cash in a passive ETF like the Technology SPDR (XLK) got you a decent 33.9% return last year—crushing the market as a whole, as well as all other stock sectors.

But when we compare XLK to ARKW, a clear picture emerges: the index was the wrong way to go: 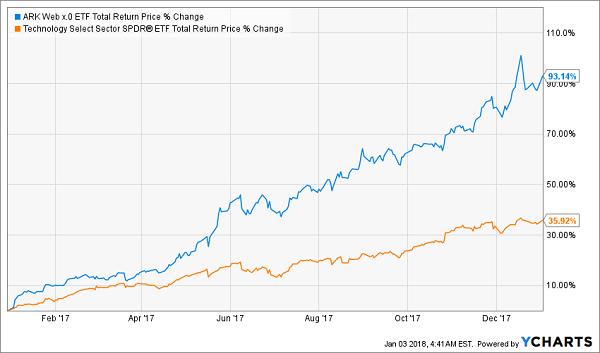 Keep in mind that ARKW did this because, although it’s high tech, it has an old fashioned approach to the market: it’s actively managed. Fund managers use a variety of asset picking processes to beat the index, and they did that by a mile last year.

This is possible because of a simple, yet often overlooked fact about index funds: they simply cannot outperform.

That’s true by definition: the whole point of an index fund is to simply track the market’s performance at the lowest possible cost. The so-called “wisdom” on these funds is that the lower management fees they charge boost your returns because they put more money in your pocket and less in the fund manager’s hands.

This theory makes sense … but only when you’re comparing a passive ETF with a bad actively managed fund!

Let’s take a couple examples from the corporate bond market to prove this point. A really popular but poorly managed fund is the PIMCO High Income Fund (PHK). I don’t like this fund, which is why I warned readers to avoid it in a June article.

This junk-bond fund really is junk—which is why it’s sunk since my June article, while the benchmark SPDR Bloomberg Barclays High Yield Bond ETF (JNK) has held steady:

PHK’s Active Strategy Is a Dud 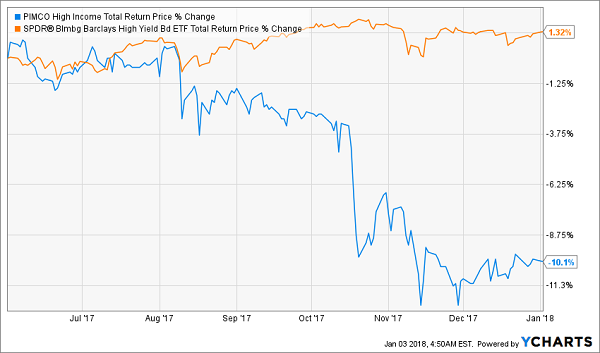 But that doesn’t mean I like JNK! In fact, it’s an awful fund (if you want to know why, read this article my colleague Brett Owens recently wrote applauding—and panning—some well-known junk bond funds).

That’s why I recommended another actively managed high-yield bond fund to subscribers of my CEF Insider service on August 25. That pick (the red line in the chart below) has gone on to crush the index and destroy PHK:

Of course, PHK’s poor performance isn’t indicative of the high-yield market, which had a solid 2017. In fact, some junk bond funds were up by over 10% on the year—all because they are actively managed. 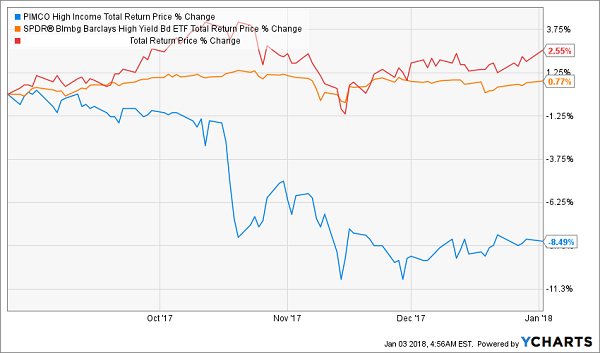 I can’t reveal this fund’s identity here, as it wouldn’t be fair to my paying CEF Insider subscribers. But you can get full details on it and all 14 CEFs in the publication’s portfolio (plus a free Special Report giving you my 4 top CEFs to for 8.1% dividends and upside) when you take a no-risk 60-day trial here.

Your 2-Step Plan for Fund Buying in 2018—and Beyond

Okay, it’s easy to say—not so easy to do.

So how do you identify the actively managed winners and avoid the losers? Here are two very important things to consider:

When it comes to closed-end funds, this is key. CEFs can trade at a big premium to their net asset value (NAV), and that, in turn, can result in retail investors getting ripped off by Wall Street.

In short, they’re paying more than $1 for a buck in assets—essentially giving money managers a free lunch. This is why I focus on getting CEFs at a discount to NAV—and getting the discount when it’s at its widest.

This isn’t only a consideration for CEFs, though. Although ETFs and mutual funds trade at or near their net asset value at all times, they can still be overpriced if the underlying assets in those funds are a lot poorer than the market realizes—or if the fund’s strategy is a lot less sound than it appears to be. That’s when investors need to get their hands dirty and dig deep into what’s really in the fund and what’s been historically driving the fund’s returns.

Or better yet, you can let me do all the legwork for you when you try out CEF Insider through a risk-free 60-day trial you can start here.

PHK has traded at one of the biggest premiums to NAV in history—at times its premium was over 70%!

Why? Because PHK’s historical performance was consistently breathtaking. The fund beat the S&P 500 even during the years after the global financial crisis—and it kept paying massive 12% dividends to investors at the same time.

But PHK failed to adapt to a recovering economy.

In short, as the market’s key drivers changed in 2014 and 2015, PHK failed to keep up. Investors didn’t really take notice until Bill Gross, the legendary “bond king,” left the fund in 2015—but then they quickly forgot, giving PHK a massive valuation again.

And then the fund’s premium to NAV (shown in the orange line below) did this: 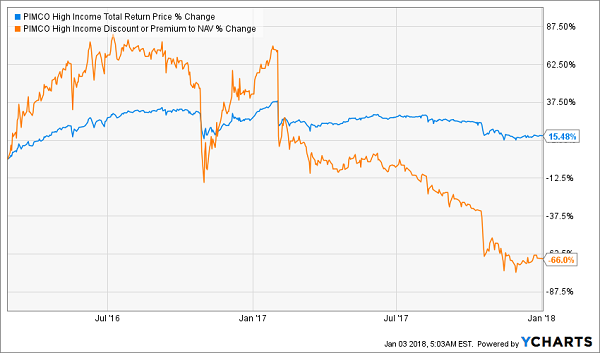 It would take another article to explain why this happened, but the short story is this: PHK failed to adapt, and the market slowly caught on.

Remember that dumb index funds can’t adapt to the market. They’re dumb! When the market goes up, they go up—which is why everyone holding SPY since 2009 thinks they’re a genius. But when the market crashes, these nervous nellies will likely react with panic selling, driving the market lower.

As I just mentioned, you can skip right to the good stuff—the names of the funds with the highest yields and biggest gains ahead in 2018 (I’m talking SAFE dividends up to 10% and double-digit upside) when you take a no-risk 60-day trial to CEF Insider today!

Simply CLICK HERE now to start your trial now. When you do, you’ll get instant access to the names, tickers and my complete research on each and every one of the 14 cash machines in the service’s portfolio.

These 14 bargain CEFs all trade at absurd discounts to NAV that are slowly narrowing. That puts unrelenting upward pressure on their share prices and sets us up for a market-crushing gain in 2018!

But the best part—by far—is the dividends.

Right now, the portfolio boasts an average yield of 7.4%. But remember, that’s just the average! Cherry-pick my 3 highest-yielding picks, and you’ll be pocketing life-changing payouts like 10.0%, 8.9% and 8.6%!

I hope you’ll take this opportunity to join the small group of investors across the country who are pocketing regular monthly dividend checks from these 14 terrific funds.

And to sweeten the pot further, I’ll also GIVE you my latest Special Report FREE!

This exclusive guide reveals the names, tickers, buy-under prices and more on my 4 favorite CEFs for 2018. Grab these 4 cash machines now and you’ll trigger an 8.1% income stream and position yourself for 20%+ upside before 2019 dawns!

Don’t wait. CLICK HERE now to get your copy of this revealing FREE report and start your no-risk trial to CEF Insider now.