Make Your Millionaire Friends Look Broke with These 7% Yields

My friend is a young 41-year old millionaire. And the poor guy is basically broke!

Meanwhile there’s a conservative yet savvy grandma in the Midwest raking in more monthly income than my boy, on a modest $387,000 in savings.

What’s her secret? We’ll get to that in a minute. First, let’s lament my man’s millionaire curse.

His stash of cash does him no good, other than giving him something to worry about. His million-dollar problem? He doesn’t know how to turn his green pile into a steady, sustainable income stream.

And since he believes in efficient markets, he has no interest in exploring investments that could pay him 7% or 8% annually – providing him with $75,000+ in yearly income while leaving his capital intact (or better than intact) to boot.

You probably know a few broke millionaires too. In fact, today, anyone with a million bucks or two is (sadly) more likely to be poor than not.

That’s less than your neighborhood barista. And heck, unless your friend is a multi-millionaire already, they’d better go get a job at the coffee shop!

On a monthly basis, these “one millionaires” aren’t even clearing $2,000 per month. And if they saved two million, they still only have $4,000 in monthly income.

That was my entry-level salary as a know-nothing 21-year old fresh out of college. How tragic that a successful retiree with $2 million to their name would have to live paycheck-to-paycheck like I did, back when I was single, foolish and carefree!

Fortunately for you and I, the financial markets aren’t 100% efficient. And some corners are even less mature and less combed through than others.

These corners provide us contrarian with lucrative income opportunities that are both safe and lucrative.

Yesterday I was chatting with our resident closed-end fund (CEF) expert Michael Foster about the reasons for the anomalies we see in high yield. In an efficient market, you wouldn’t expect funds that pay big dividends today to also outperform the S&P 500 on a total return basis. We’re taught that it’s an either/or relationship between yield and upside – we can either collect dividends today, or enjoy upside tomorrow, but not both.

But that’s simply not true in real-life. Otherwise, why would these ten funds beat the market and pay yields between 5.4% and 9.5%?

Ten CEFs That Pay and Outperform

This is the key to a true “No Withdrawal” Retirement Portfolio – banking enough yields to live on, while protecting (or better yet, increasing) your base of capital. It’s literally the difference between dying broke and never running out of money no matter how long you live – a $2.2 million difference to be specific!

Millionaires who put their cash in the S&P 500 ten years ago have seen their million grow to $1,594,400 then years later.

Let’s contrast this with the prescient CEF investor who instead bought one of Michael’s ten unicorns that “shouldn’t exist” in today’s efficient financial markets. These investors are sitting on gains alone between $1.7 million and $2.8 million. Again, these are pure profits! 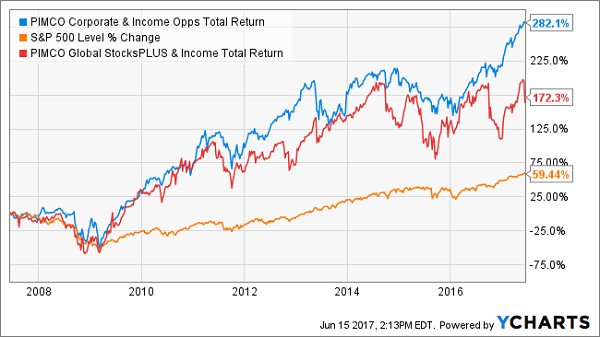 Don’t “just” buy stocks and hope they go up in price enough to cover your living expenses. Instead, guarantee it with a savvy purchase. It could make a $2.2 million difference in just a decade.

Even if you’re not trying to get really rich, I’m sure you want your money to last forever. And that’s exactly what this savvy grandmother is doing as she out-earns many millionaires, including my poor rich friend.

Last week I was chatting with a reader of mine who manages money for a select group of clients. He’s using my No Withdrawal Portfolio to make a client’s modest savings – a nice grandmother with $387,000 – last longer than she ever dreamed:

“Well she’s already withdrawn money for seven months (at $3,000 per month) and her balance has actually grown to $396,000. If the portfolio continues yielding 7% per year plus 2% per year in capital gains, and she withdraws $3,000 per month, it will pay my fees and still last her 27 years!”

You can easily follow in grandma’s footsteps and collect 7%+ annual yields while watching your portfolio actually grow in value as well by following this 2-step formula.

The Best “No Withdrawal” Plays Today

Are there CEFs paying 7%+ today that will appreciate in price and outperform the S&P 500 in the next decade? Of course.

The key is buying those that are out-of-favor for no good reason. Buy them at a discount and watch them appreciate – while you collect their fat yields to boot.

That’s exactly what my Contrarian Income Report subscribers and I did when we purchased Nuveen’s NASDAQ 100 Dynamic Overwrite Fund (QQQX) in early January. We locked in a 6%+ yield at the time with the anticipation of double-digit upside. That happened in just five months as we enjoyed 20% total returns! 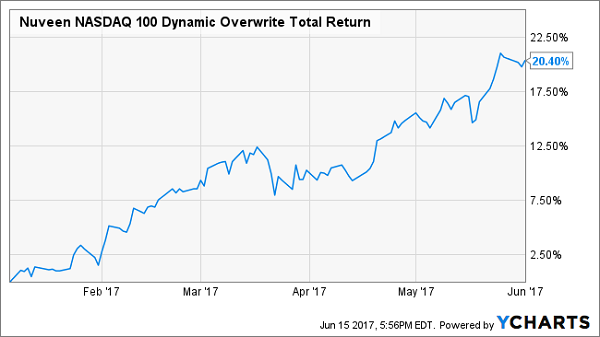 Plus, like grandma, we have some upside on our capital as well. It’s why our portfolio has returned 14.6% annualized since inception.