Today we’re in a situation that looks a lot like 2016. And back then, some savvy contrarians tapped it to grab quick 62%+ returns. The same setup is back again—and so is our chance for more upside, plus yields north of 10%.

There are two closed-end funds (CEFs) poised to deliver those high yields (and overall returns); we’ll compare two popular options in a moment. First, let’s delve into the state of the corporate-bond market, because there are a lot of misconceptions floating around right now.

“Junk” Bonds Not as Risky as They Seem

You might know high-yield bonds by their nickname: junk bonds.

The unfortunate label refers to low-rated or unrated debt issued by companies that are willing to pay a higher interest rate to investors. They’re seen as risky because they default more often than more highly rated corporate bonds. And they do default more, but their overall default rates are still minuscule. 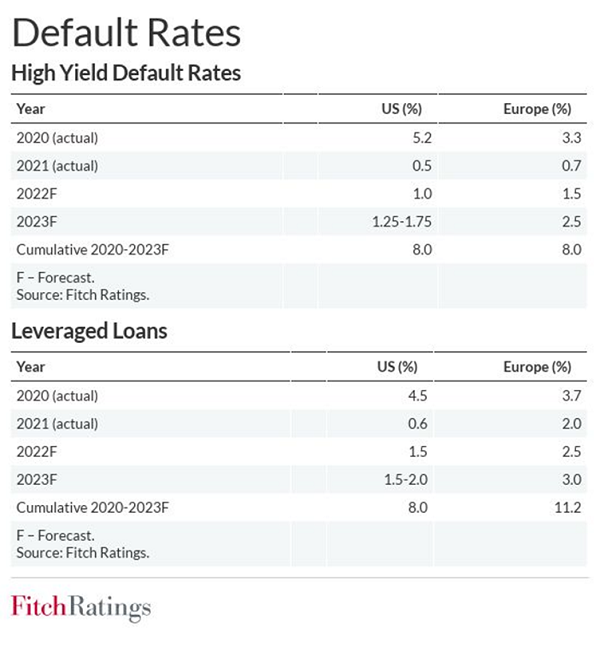 Fitch Ratings, one of the most pessimistic credit agencies out there, is expecting default rates to go from 1.25% in 2022 to 1.5% in 2023—both of which are below historical norms and far below rates we saw in 2020. Yet a lot of bonds are trading for less than they did during the pandemic. This has created a buying opportunity in bonds with sustainable cash flow and high yields.

And when you buy through CEFs, you’ll automatically diversify across hundreds of bonds, cutting your default risk to essentially zero.

2 Popular Bond Funds: One Is a Better Buy

To get a clearer picture of the opportunity in front of us, let’s dissect the PIMCO High Income Fund (PHK) and the PIMCO Dynamic Income Opportunities Fund (PDO). Both are run by the same manager, and both have high yields: 11.5% for PHK and 10.6% for PDO.

Yet one of these is a great buy and the other is less compelling, even though both are poised to pop over the next few months. 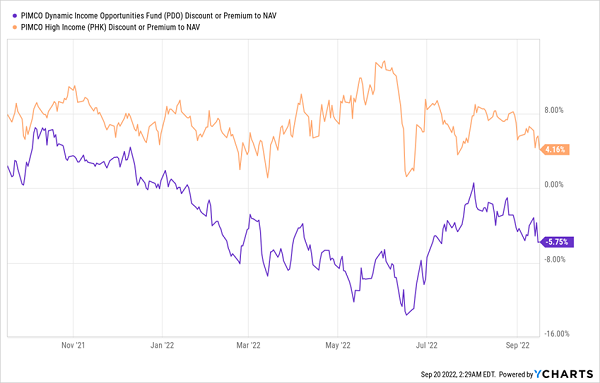 Despite having similar management and investment strategies, PDO trades at a 5.8% discount to net asset value (NAV, or the value of the bonds it owns), while PHK trades for more than its portfolio is worth. This means that, to fund its 11.5% dividend (based on its premium market price), PHK needs to earn nearly a 12% total return on its portfolio, which is impossible over the long term, but something PHK has been able to do in the past over shorter periods of time (more on this shortly).

PDO, meanwhile, needs to earn 10% to fund its 10.6% yield, because its market price is discounted to its NAV. That’s still a tough feat, but not impossible. And here’s why.

A Big Yield—and a Big Opportunity

Here we have an index of the effective yield that high-yield bonds currently pay. So if you buy a high-yield corporate bond now, you’ll probably get an income stream of about 8.6%, the highest we’ve seen since the onset of the pandemic. It’s also a level we’ve only touched a few times in the last 20 years: in 2002, 2008, 2011 and 2016.

Each time yields spiked, the market was in its gloomiest days, with fears of terrorism in 2002, a global economic crisis in 2008, a potential US debt default in 2011 and Fed rate hikes creating recession worries in 2016. History, as they say, may not repeat, but it does rhyme.

And the rhyme between today and 2016 is hard to ignore. So what happened to PDO and PHK back then? PDO didn’t exist, but its sister fund, the similarly named PIMCO Dynamic Income Fund (PDI) did, and this is how it and PHK performed in the three years after rates peaked in 2016 at levels similar to where we are now in 2022. 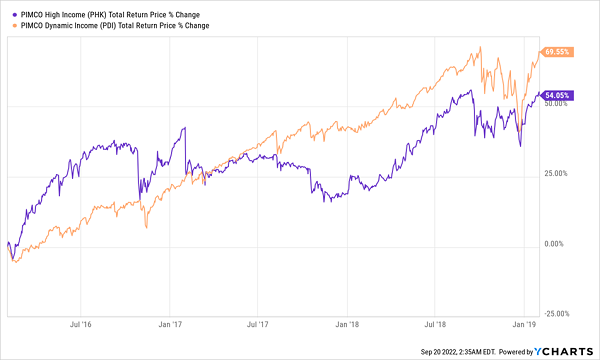 As this chart shows, PDI and PHK rose 62% on average in that span, giving a healthy return to investors who saw this opportunity. It’s a setup so similar to today that it’s a great reason to be bullish on these so-called “junk” bonds.

Urgent: Get My Top CEFs for the Coming Critical 12 Months Today

You’ll get my favorite corporate-bond CEF now, along with 4 other high-quality CEFs from across the economy when you buy the 5 CEFs I’m urging investors to buy now. These 5 bargain-priced funds—my TOP buys for the coming year—offer an outsized 8.6% average dividend!

As impressive as that payout is, it’s only the opening act, because these funds’ unusual discounts to NAV are primed to propel them to 20%+ price upside in the next 12 months! That’s in addition to their fat 8.6% payouts!

I’ve put everything I have on all 5 of these funds—their names, tickers, current yields, discounts and more—in a FREE special report you can access right here.