Will interest rates really get the chop everyone thinks they will as 2019 rolls into the home stretch?

The smart money certainly thinks it knows. Beyond tomorrow’s rate cut (which the pros see as all but in the can), futures traders predict two more chops—in September and December: 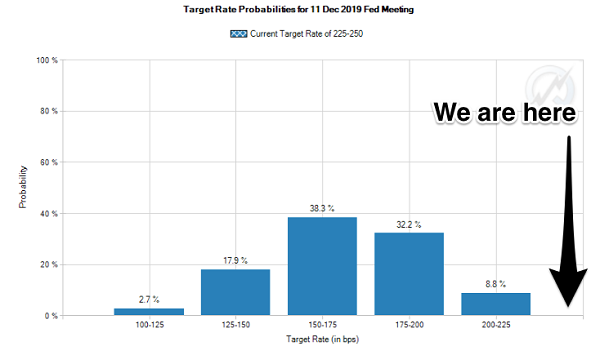 But here’s something no one will tell you: not a single person outside of Jerome Powell has any clue what the Fed will do next.

Not futures traders. Not your adviser. Certainly not the talking heads on CNBC.

That’s why we’re going to dive into three “forever” stocks that beat the market no matter what rates do. More on those shortly.

And if you sit on them for the long haul—I’m talking decades here—you can almost certainly count on outperforming the market.

Before I name names, I’ll tell you that all three of these companies are real estate investment trusts (REITs), dividend-paying “landlords” that crush the market no matter what rates are doing.

That’s right—and I can prove it in one chart: 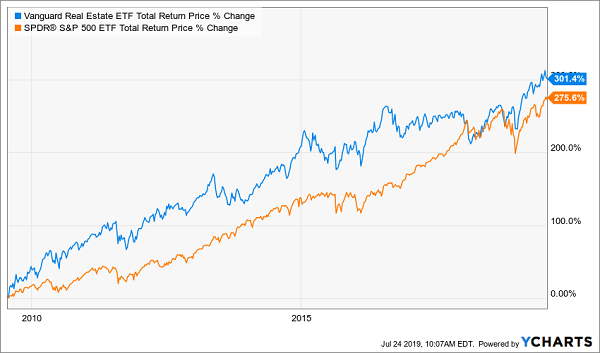 You’re looking at the 301% gain from the benchmark Vanguard Real Estate ETF (VNQ)—the blue line above—over the last 10 years. This is a critical timeframe, because rates were effectively at zero for more than half that time, from July 2009 to December 2015.

In other words, it’s the perfect rates-up, rates-down “proving ground”!

The reason for that is simple: even though rates do affect our REIT landlords’ borrowing costs, that’s just one part of the REIT story. More important is that the rent checks come in on time—and grow.

That’s exactly what’s happened in the last decade, and these cash-rich stocks have been steadily filling investors’ pockets with gains and outsized dividends as a result.

55 Years of Crushing the Market

In fact, forget about the last decade.

Let’s talk about how REITs have done over the very long haul (55 years, to be exact), through booms and busts—and rising and falling rates.

The answer comes from a 2017 a study that looked at various investments from 1960 through 2015. Called “Historical Returns of the Market Portfolio,” this research came to one simple conclusion:

REITs have consistently clobbered other stocks. And bonds, too. 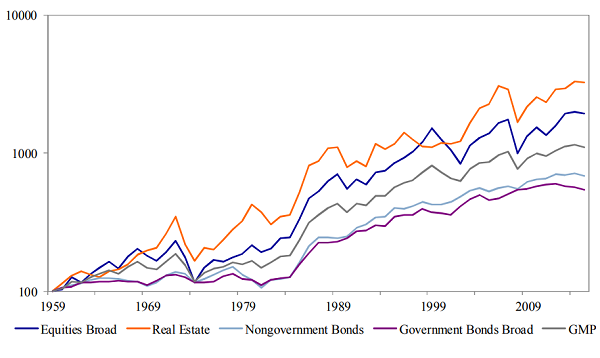 So which REITs can we look to for even stronger outperformance in the next 55 years? One thing we won’t do is consider the “lazy” choice, VNQ.

We can do way better.

Yesterday, my colleague Michael Foster rolled out two REIT-focused closed-end funds (CEFs) yielding 6.8%+ now (you can get the full story, including the names and tickers on these cash machines right here).

Both funds are great candidates for buying now and holding for the next one, two or even five decades.

But if you’re more of a DIY investor, I’ve got you covered there, too. Here are three individual REITs I see as more than worthy of your attention if you’re on the hunt for stocks to buy and tuck away till 2029, 2039—heck even 2074.

NHI invests in seniors’ housing, medical centers and skilled-nursing facilities—all of which are lined up for decades of growing profits, with 10,000 baby boomers turning 65 every day.

The REIT drops cash into these properties and consistently nails down strong returns on its money. One way it does this is through sale-and-leaseback deals (where operators sell their facilities to NHI for an immediate cash hit, then lease them back, giving the REIT—and us—a steady long-term income stream).

The maestro conducting these deals is CEO Eric Mendelsohn, a medical-real-estate vet with 20 years’ experience. His record speaks for itself: NHI has delivered a total return far bigger than that of the average REIT since he took over in October 2015: 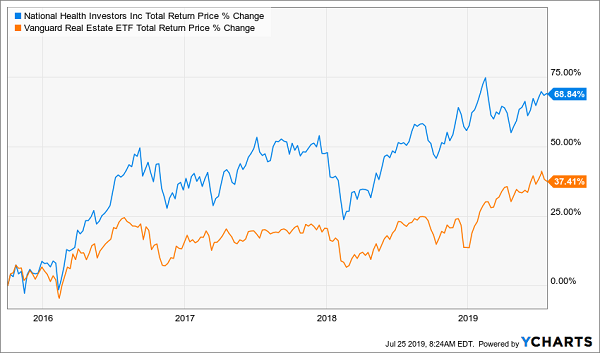 A big part of that gain has been driven by NHI’s dividend (current yield: 5.3%), which Mendelsohn and Co. have kept nicely rolling higher: 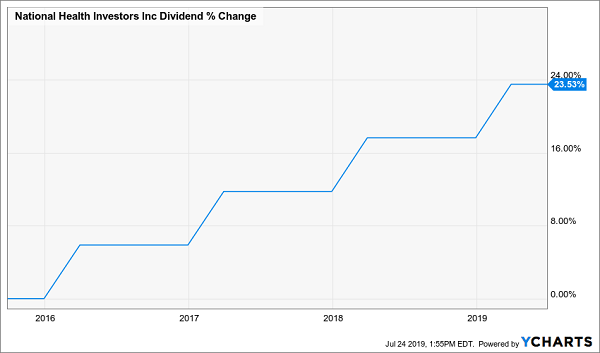 NHI has plenty of room to keep the payout growing: its dividend is 83% of the midpoint of projected 2019 funds from operations (FFO, the best measure of REIT profitability). That’s more than manageable for NHI, which gets predictable interest and lease income from its always-in-demand tenants and borrowers.

The kicker? NHI is a bargain, trading at 15.6-times the midpoint of projected 2019 FFO, setting us up for even more gains.

When looking for REITs that will gain no matter what the Fed does, it pays to key in on megatrends that will reshape society forever.

You can see that in NHI’s tie to our aging population. You can also see it in Crown Castle International (CCI), which owns 40,000 cell towers and 70,000 route miles of fiber optic cable.

Name a tech trend and CCI’s there to play it:

Surging use of streaming video? Check.

That valuation might sound high, but it’s par for the course for this innovator, which usually trades at multiples that high. If you’d let that put you off a year ago, you’d have missed out on a 23% total return, nearly three times that of the S&P 500. 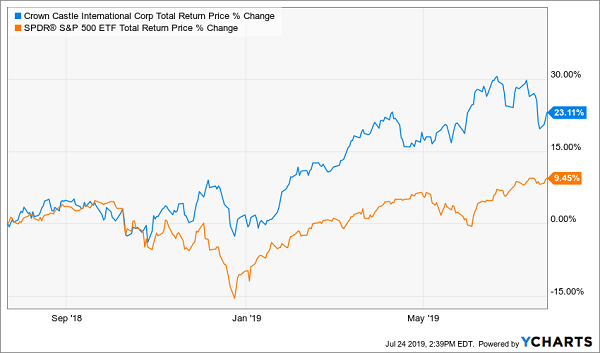 CCI yields 3.5% now, and management isn’t afraid to pull the trigger on a nice dividend hike.

And with the payout even better covered than that of NHI—at 76% of forecast 2019 FFO—they’ve got more than enough room to do so, just like they’ve done since CCI started paying dividends in 2014: 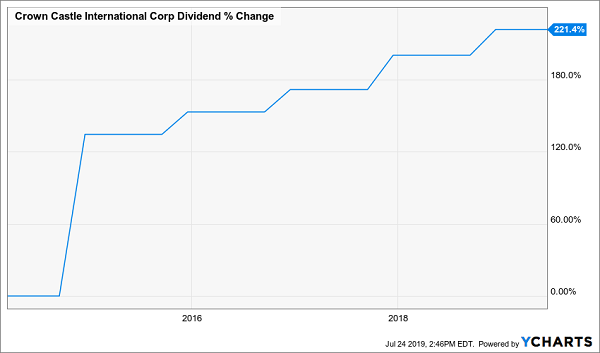 With another dividend hike likely this October, the time to jump on this “megatrend” tech REIT is now.

Let’s round out our three-stock REIT portfolio with Duke, which has smashed the S&P, in orange below, and the REIT benchmark, in red, over the last 10 years. 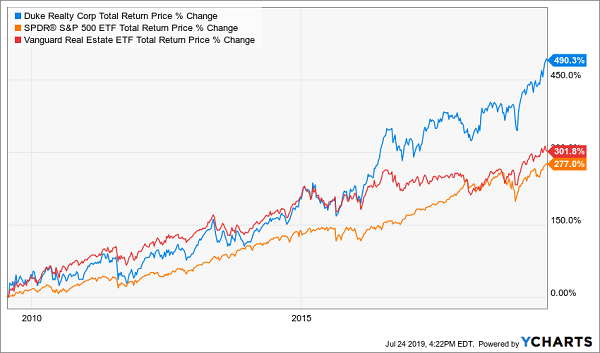 The company is a warehouse operator with 156 million square feet of space across the US. It’s a “prime” recipient of another unstoppable trend: the continued surge of online shopping.

In the first quarter, Duke’s warehouses were as full as they could reasonably be, at 98.4% occupancy. Core FFO soared 10% as management deftly renewed leases and signed deals with new tenants at higher rates.

The stock yields 2.6% now, but the key thing to look at here are the two monstrous special payouts Duke dropped in November 2017 and October 2015, which you can see in the following chart. You can also see that Duke’s stock price popped after each one:

Special Dividends Cause Shares to Spike 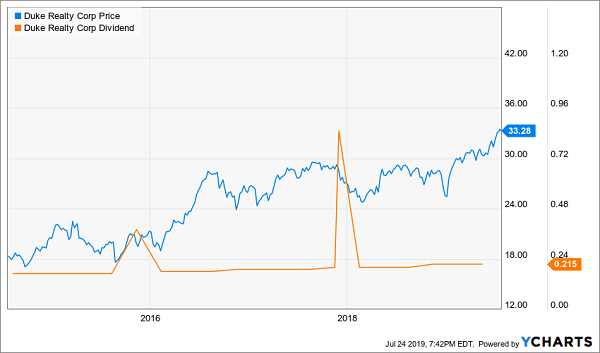 Those special dividends are about two years apart, so you can likely tell what I’m going to say next: 2019 falls two years after Duke’s last “special”—raising the odds of another October surprise, triggering a nice income (and share price) gain in the process.

But the calendar isn’t the only reason to think so: another is the aforementioned surge in FFO.

Another hint? The wide margin by which Duke has covered its “regular” dividend: the payout is just 61% of the midpoint of management’s forecast 2019 FFO, giving the company lots of room to share its extra cash with us.

2 More “Forever” REITs That Will Shock You (Massive Yields Up to 8.9%)

These 3 REITs are solid buys now—and with interest rates (and their borrowing costs) set to fall, they’re lined up for some nice extra profits.

You could easily buy all three now and tuck them away forever.

There’s just one problem: the highest yielder, NHI, pays a 5.3% dividend. That’s not bad, but if you’re like me, you want more of your return in cash.

That’s where the 2 other REITs I have for you today come in. Take a look:

Thanks to their ridiculously cheap valuations, these 2 picks position us a for nice hit of upside right at the start, especially as falling rates drive the income-starved masses into their huge—and safe—cash payouts.

How big of a gain am I talking about here?

I think you’ll agree that’s a strong head start on stocks we’re planning to hold for the long haul. And that 25% comes in addition to the 7% and 8.9% dividends we’ll pocket!

I’m ready to spill the beans on these 2 elite REITs now. Click here for full details: names, tickers, buy-under prices and more. Plus I’ll share my personal 5-step REIT picking system—it gives you everything you need to tap REITs huge dividends with confidence!