How to Wreck Your Retirement in 2 Buys

In my years in the markets, I’ve seen some dangerous financial products come on the scene, but the two I’m going to show you in a moment might be the most dangerous.

No, I’m not talking about Bitcoin—although cryptocurrencies are pretty risky, since, as I wrote on January 1, most people don’t understand just how big a failure Bitcoin really is.

I’m talking about two new funds that have recently been released by BMO Capital Markets in conjunction with REX Exchange-Traded Funds.

Before I go into just how terrible these two funds are, let’s do a bit of digging into who BMO and REX are. That may be enough to scare you on its own.

They’re by no means the biggest investment bank doing this kind of work—they’re not about to dethrone Goldman Sachs (GS), Morgan Stanley (MS) or JPMorgan Chase (JPM).

BMO isn’t even the biggest Canadian bank. Royal Bank of Canada (RY) and TD Bank (TD) are much bigger, as is Bank of Nova Scotia (BNS). But BMO is a responsible and trustworthy bank when they do their own work.

And therein lies the problem: BMO is working with REX, a small, new company whose products range from okay to awful.

For example, a couple of REX’s current ETFs give investors a way to bet on stock volatility, either wagering on smoother sailing, through the REX VolMAXX Long VIX Weekly Futures Strategy ETF (VMAX), or rising volatility, with the REX VolMAXX Short VIX Weekly Futures Strategy ETF (VMIN). REX also has the Rex Gold-Hedged S&P 500 ETF (GHS), which gives investors exposure to stocks and gold at the same time.

There are already some problems with these funds—and we haven’t even gotten to the two I want to warn you about today yet!

Second, the volatility funds have underperformed their competitors. Why use VMIN when you could use the VelocityShares Daily Inverse VIX Short-Term ETN (XIV), which does the same thing and has produced returns that double up those of REX’s offering? 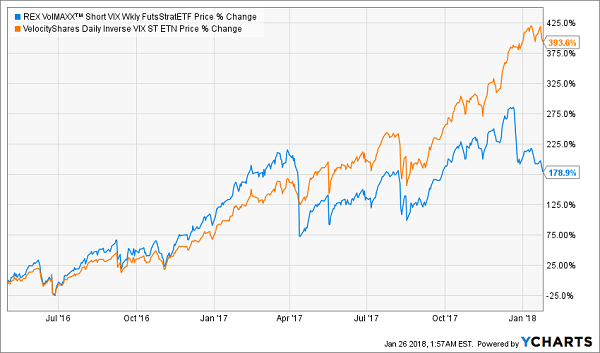 Now let’s move on to the perilous funds I really want to discuss.

These are two REX/BMO collaborations that give investors exposure to the famous FAANG stocks: Facebook (FB), Apple (AAPL), Amazon (AMZN), Netflix (NFLX) and Google (GOOG, GOOGL). One of these funds is long these stocks and trades under the FNGU ticker, and the other is short these stocks (FNGD).

Sounds convenient, right? If you think FAANG is underpriced or overpriced, trade these funds and make a bundle.

Except don’t do that. You won’t make a bundle—even if you’re right. Here’s why.

My biggest problem with these funds is that they aren’t what they claim to be.

Let’s start with the BMO REX MicroSectors FANG+ Index 3X Leveraged ETN (FNGU). The name is a mouthful, but there’s really just one part of it you should pay attention to—that little plus sign after “FANG.”

That “plus” refers to the fact that the fund “includes 10 highly liquid stocks that represent a segment of the technology and consumer discretionary sectors consisting of highly traded growth stocks of technology and tech-enabled companies,” according to REX’s description of the fund.

There aren’t 10 FAANG stocks, so what else is in here? The fund, as of the middle of December 2017, was equally exposed to FAANG stocks and non-FAANG companies Alibaba (BABA), Baidu (BIDU), Nvidia (NVDA), Tesla (TSLA) and Twitter (TWTR).

By buying FNGU, investors are getting a lot of exposure to China and Bitcoin (which is a big determinant in NVDA’s stock price these days) as well as the car industry and Elon Musk’s cult of personality. And did anyone at REX notice that Twitter is a competitor to Facebook?

These aren’t just funds that buy and hold FAANG (and other) stocks—they use leverage to increase that exposure.

A lot of leverage.

These are 3x levered ETNs, which means two things. Firstly, since FNGU is an exchange-traded note and not an exchange-traded fund, it doesn’t technically own the stocks it’s tracking. That isn’t too important, but this next point is: for every dollar, the fund is using $3 of leverage, which means it will fall very hard when these highly volatile stocks fall.

Just how far could this fund fall?

Since some of these companies are fairly young, they haven’t suffered a bear market. But the NASDAQ 100 (QQQ) has. During the 2008 stock crash, QQQ did this: 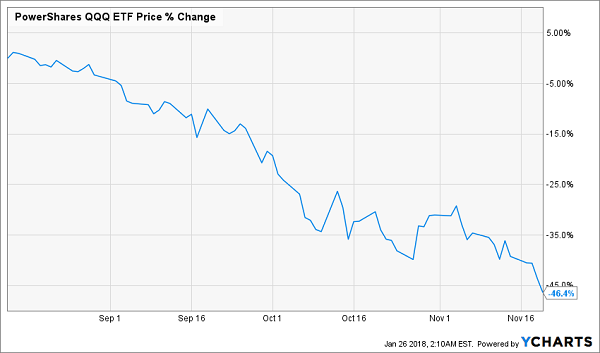 If FNGU were around back then, it would have gone to zero. Investors would have lost everything.

The opposite is true for the short fund—FNGD (full name: the BMO REX MicroSectors FANG Index -3X Inverse Leveraged Exchange Traded Note). It’s already down 6.6% since its IPO on January 22, but if FAANG shoots up, as these stocks have in the past, expect much bigger losses to accrue very quickly.

That isn’t even taking into account the costs of leverage. You can’t borrow for free, and the costs of borrowing money to lever ETF returns is a famous problem for leveraged ETFs. It’s known as “leveraged ETF decay,” and it will eat into returns even more.

Sadly, many ETF investors don’t realize how dangerous this leverage is until it’s too late.

Problem #3: No Weighting, No Management, No Methodology

Unlike sophisticated tech funds, like the BlackRock Science & Technology Trust (BST), which is up 63.9% in the last year, FNGU and FNGD have no active management and no methodology for choosing how much of each stock to expose investors to.

Worse, FNGU and FNGD don’t even seem to be doing simple things like weighting exposure by market capitalization or through some other straightforward methodology. Apple has an $878.5-billion market cap, while Twitter’s market cap is just $16.5 billion. What possible reason would REX have to expose investors equally to these companies when one is over 50 times bigger than the other?

It’s hard to explain the lack of active management, or even smart asset allocation, in this fund. Even SPY, which is one of the dumbest (and cheapest) passive ETFs out there, weights its exposure to each stock according to market cap. This is not hard to do! But FNGU and FNGD don’t bother. Why? Laziness? We just don’t know.

With so many built-in risks, there’s no doubt in my mind that folks looking to make a fast gain are taking a BIG risk with FNGU and FNGD.

My advice: steer clear of this pair—and look to 4 other funds I urge you to buy now.

Unlike the REX/BMO offerings, these 4 funds have long histories of beating the market.

And before you ask, none of these 4 funds hold any volatile FAANG stocks. Together, they spread your nest egg among some of the most boring investments you’ll find: top-quality real-estate investment trusts, corporate and municipal bonds and blue-chip stocks (US and global).

Finding this level of diversification, with just 4 quick buys, is almost impossible.

And I haven’t even gotten to the upside yet! All 4 of these under-the-radar investments are closed-end funds trading at massive (and unusual) markdowns to the value of their underlying portfolios (what’s known as NAV, or net asset value).

The upshot? When these silly discounts snap back to “normal”—a certainty, in my view—their share prices will catapult higher too!

We’re “pre-loaded” for easy 20% price gains, and when you tack on the 8.1% average CASH dividends these funds throw off, we’re talking about a 28% total return in the next 12 months. And remember, that’s just the average—some of these 4 superstar funds are primed to soar even higher!

I’m ready to share all the details on these 4 incredible cash machines—names, tickers, buy-under prices, the works—with you. All you have to do is click here to get the whole exciting story now!