Another year, another COVID relief package—$1.9 trillion worth this time. As the old saying goes, “A trillion here, a trillion there, and soon you’re starting to talk about real money!”

But what does this latest cash injection into the economy mean for our closed-end fund (CEF) returns in 2021? Let’s take a look, starting with the big-picture view.

The Extra Debt Is Manageable

The No.1 worry with all of this is that, with all the borrowing the government has done (a total of $6 trillion has been spent on stimulus so far), we’re going to be left with a crippling debt crisis. But that simply isn’t true, because while America’s debt-to-GDP ratio now stands at 135.6%, the cost of servicing that debt has plunged: 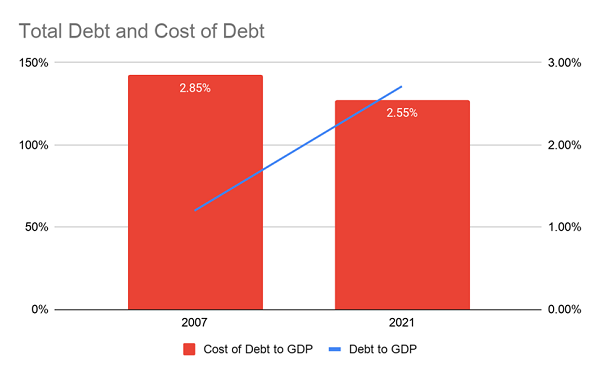 While debt-to-GDP has soared in the last 14 years, the actual cost of paying the interest on that debt has fallen; above I use rates on the 30-year Treasury yield, but the actual mix of debt includes a lot of shorter-dated Treasuries with lower yields, which means the current cost of debt is actually lower.

What does this mean? Simply put, we can afford the debt we have now, and since we’re facing a pandemic, massive unemployment and skyrocketing bankruptcies, now is not the time to worry about the government’s debt load. Instead, we need to focus on fixing these problems so we can grow the economy in the 2020s and pay down debt systematically over the next decade.

The other thing to keep in mind is that, by the numbers, Biden’s plan is more aggressive and ambitious than the plans that preceded it, which means it will likely benefit stocks even more.

President Biden’s plan includes $1,400 stimulus checks to qualifying Americans, in addition to rental assistance and emergency paid leave. There is also a lot of money ($165 billion) earmarked for schools, which the plan claims is meant to help them safely reopen and enhance their remote-learning capability.

While there is much in this plan to criticize (as can be said for all stimulus plans in American history), it is clear that the emphasis is on getting money into the hands of people who are likely to spend it, with 58% of the funds targeting individuals and their families.

How This Plan Affects Stocks (and Stock-Focused CEFs)

With the majority of money going to individuals, President Biden’s plan will likely drive up individual spending, arguably more so than the original $2-trillion CARES passed last March, which earmarked a much lower 28% of its assistance to individuals.

So how should us CEF investors react?

Obviously, more money with consumers means more consuming, and with vaccinations likely to pick up speed over the next few months, we’ll likely see a lot of money being spent on things that couldn’t be bought at scale during the pandemic. That, of course, would lead to greater spending in more cyclical parts of the economy, such as retailers, restaurants and movie theatres. That, in turn, will lift the S&P 500 as a whole, and index funds like SPDR S&P 500 ETF Trust (SPY) and Vanguard S&P 500 ETF (VOO).

Of course, we want to do a lot better than the meager 1.5% this lame duo pays! Which is why You’re far better off with a CEF like the S&P 500–holding Nuveen S&P 500 Dynamic Overwrite Fund (SPXX). It holds the exact same companies the above ETFs do—blue chips like Apple (AAPL), Amazon (AMZN), Visa (V) and recent index addition Tesla (TSLA)—but its yield is much higher (4.4 times higher, in fact!), at a nice 6.6%.

I’m kicking off 2021 by releasing full details on 5 breakthrough CEFs to the public. I’ve pegged each of these 5 funds for 20%+ price upside in the coming 12 months! AND they pay even higher dividends than SPXX does: an outsized 7.5% payout between them!

The best part about investing in CEFs is that the oldest of these investments boast a safety record few other assets can match (certainly not the popular names of the S&P 500!).

Here’s what my latest research says: of the 330 CEFs out there that are a decade old or older, only 14 have lost money in the last 10 years.

That’s amazing enough on its own, but there’s more: of the 14 CEFs that did lose money, 11 were in the energy sector. Dump those 11 laggards and CEFs’ win rate jumps to an amazing 99%!

I know that sounds hard to believe, but it’s true! And it makes well-established CEFs like the 5 I’m ready to share with you now the perfect investment for 2021, in which we expect more upside but will likely see more turbulence along the way.

Full details on these stout 7.5%-payers are waiting for you. Go here and I’ll give you everything I have on these 5 “no drama” income plays—names, tickers and everything else you need to know before you buy.