As dividend investors, we don’t usually read the tea leaves in employment reports (that, after all, is the domain of economists!). But there is something happening in the working world that’s set to power the payouts, and prices, of a select group of closed-end funds (CEFs) for years to come.

That is this: people are spending less time in the office. But productivity isn’t falling. And of course, demand for workers is surging right now, setting the stage for pay hikes, bonuses, stock options—just about any way to put more money in workers’ pockets that you can think of.

Employment Roars. Are Our CEF Dividends Next? 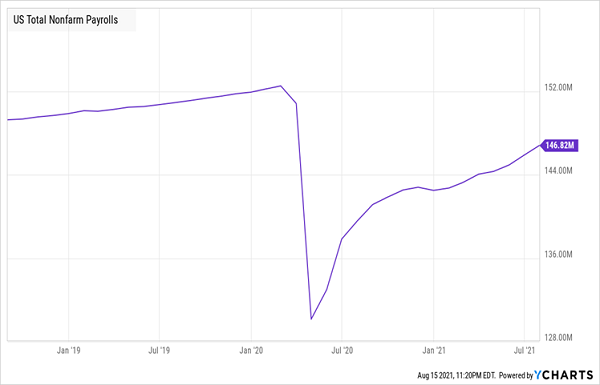 July’s employment report was one of the best ever. With 943,000 jobs added during the month (and large upward revisions to May and June figures), it’s clear the labor market is swiftly rising to its pre-pandemic level.

Stories of desperate employers offering incentives to attract workers are everywhere, from fast food to Wall Street. With bonuses being thrown out and better working conditions promised, employees now can choose their jobs and get better pay as they do so.

The bottom line—as the weeks roll on, we’ll have more people with more money to spend. And with less time in the office, they’ll have more time to spend it. Along with the trend toward remote work and better working conditions, there are also once-taboo options like the four-day workweek, which data has shown gives workers more flexibility without hurting productivity.

Everything is on the table!

The endgame here for us as CEF (and dividend) investors is a boom in discretionary spending that could roll on for years, driving the profits of retailers (especially online retailers) higher. And CEFs are there to help us cash in on this happy situation with 6%+ dividends (and discounts as wide as 7%!). More on that in a second.

First, though, we should be clear that this spending boom isn’t just a prediction. It’s already here! 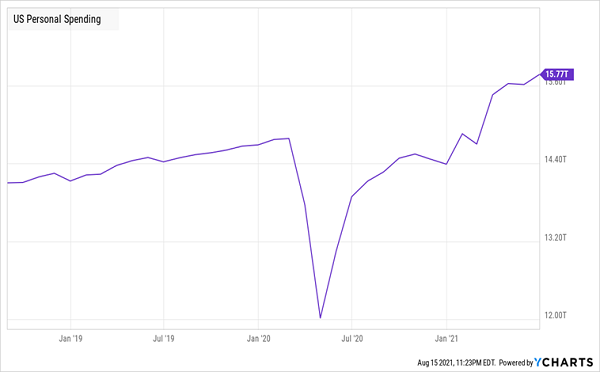 Personal spending has risen to over $15 trillion and will easily cross $16 trillion by the end of the year, far ahead of pre-pandemic levels.

With all this new cash flowing, you might think inflation is a worry. But despite more cash flowing through the registers (and e-commerce networks) and Jay Powell’s money printing quantitative easing running rampant, inflation is actually easing. Look at the right side of this chart: 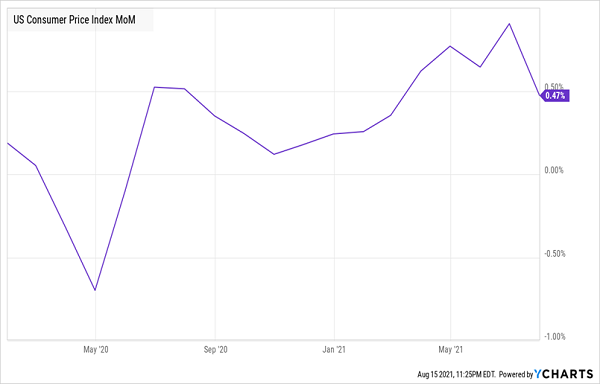 To be sure, we’re still at the third-highest level of inflation we’ve seen in a decade, so we aren’t out of the woods yet. But the slowdown to 4.3% in July from 5.4% in June suggests we’re on the path toward a more manageable and less worrisome inflation rate in the second half of 2021.

All this data suggests that if we see a market pullback in the next few weeks (triggered by the Delta variant, say), it would be a terrific buying opportunity, because the underlying strength of the economy, and the trajectory of consumer spending, are just too favorable

This 6% Dividend Is a Solid Option Now (and Later)

All told, it seems like a textbook case of strong long-term fundamentals combined with the risk of a short-term pullback, not unlike earlier this year, when inflation caused a similar spike in worry. Back then, I wrote that inflation concerns were overblown and investors should aggressively buy stocks. In particular, I spotlighted the BlackRock Enhanced Global Dividend Trust (BOE).

At the time, the fund’s top-10 holdings included consumer, and reopening, plays like Visa (V) and Amadeus IT Group SA (AMADY), the latter of which makes software that’s primarily used by the travel industry. BOE was also weighted toward countries with speedier vaccination programs, like the U.K.

Thanks to these strengths, the fund, which yielded a shade south of 7% at the time, has produced a quick 15% total return as of this writing. 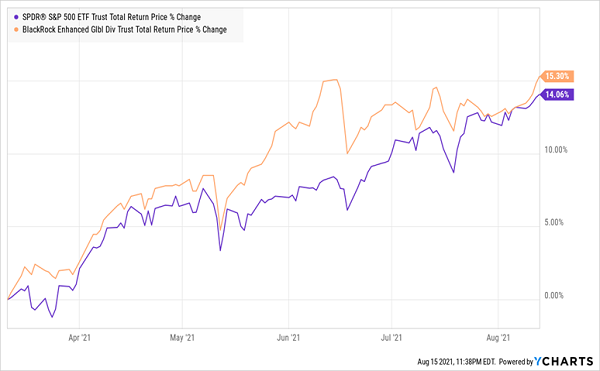 Our strategy today is to do the same: when the market panics, make our way in. Of course, as CEF investors, we won’t wait around in cash, because no one can predict when that pullback will happen, and stocks could soar before then.

Instead, I’d recommend moving some cash into a high-yielding fund like the Nuveen NASDAQ 100 Dynamic Overwrite Fund (QQQX), especially if you’re investing for the long term.

That way you’ll pick up a nice 6.1% dividend, which you can collect while you wait for the next pullback (this payout also gives your investment a natural hedge because you’re getting a big slice of your return in cash). Then you could pick up more of this fund at a discount on dips.

CEFs boast another level of safety almost no one knows about.

Right now, I’m sharing my top 5 CEFs with the public, and I want you to start collecting their massive payouts (I’m talking about a 6.9% average dividend here) and get in position for big upside, too. My latest forecasts call for 20%+ price gains from these funds in the next 12 months!