How to Play “Hidden” Dividends for Huge 8.4% Yields

There are dozens of huge yields out there that no one ever talks about. I’m talking about payouts 6-times (or bigger) than the pathetic 1.4% dividend the typical blue-chip stock pays.

These big “hidden yields” really are hiding in plain sight. The key to finding them is to set aside dividend yield for a moment and focus on shareholder yield.

Shareholder yield is a simple measure that goes beyond dividends to show you the big-picture view of what you’re pulling in from a stock—including another way companies pay us that doesn’t get nearly enough press (or at least nearly enough positive press!).

That would be share buybacks. Because only when you add a company’s buybacks to its dividends do you get a true idea of what it’s paying you. Shareholder yield is simply the two added together.

Hang with me for a second as I show you exactly how this works, how it ignites your profits and how to calculate shareholder yield yourself.

Start With the Current Yield …

Let’s start with a big-name stock many folks have owned for so long they’ve probably forgotten they even hold it. That would be Oracle Corp. (ORCL), which has been around since the late-’70s and peddles database software and cloud-computing systems.

As I write this, Oracle yields 1.8%. Pathetic, I know, but it’s just our starting point.

… Add a Hit of Payout Growth …

If you’ve held Oracle for a while, you’ve likely barely noticed its dividend hikes—over the last decade, it’s mostly dropped marginal increases on shareholders every couple years (with the exception of its latest raise, a nice 33% payout boost). It also paid a nice one-time special payout in 2012: 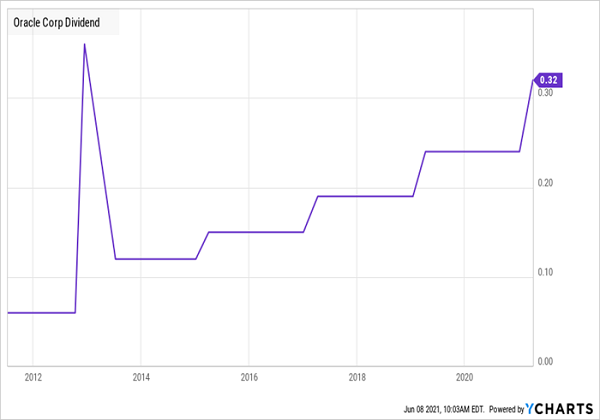 Those hikes have caused Oracle’s regular monthly payout to increase more than fivefold in the last 10 years. This means, if you bought in mid-2011, your yield on cost—or the payout you’re getting on your original buy—has jumped to 4%, or more than double what buyers are getting if they pick up the stock today.

A 4% dividend is okay, but it’s still not great, especially if you had to wait 10 years to get it. And that’s where the second stage of shareholder yield comes in: share buybacks.

Buybacks have gotten a bad rap, but the truth is, when they’re done when a stock is cheap, they’re a tonic for share prices. This is why it makes sense for Oracle to continue buying back its stock, as it’s doing today. As I write this, Oracle shares trade at a reasonable 20.3-times earnings, which sounds high but is still well below the 25-times earnings at which Oracle has traded, on average, in the last five years).

How Well-Timed Buybacks Boost Your Profits

Another little-mentioned benefit of repurchases is that they create a wonderful “feedback loop” that boosts dividend growth, because fewer shares outstanding means fewer shares on which the company has to pay out.

Companies also like buybacks because they give them flexibility—they can throttle back repurchases if they see a better way to boost your return (like an expansion or an acquisition) without facing the investor tantrum—and share-price crash—a dividend cut usually brings.

That’s likely why Oracle boss Larry Ellison leans much more heavily on buybacks than dividends—he’s slashed the company’s shares outstanding nearly in half in the last decade and kept on doing so through the March 2020 nightmare, when company after company dumped their buybacks and their dividends.

A Well-Executed Buyback in Action 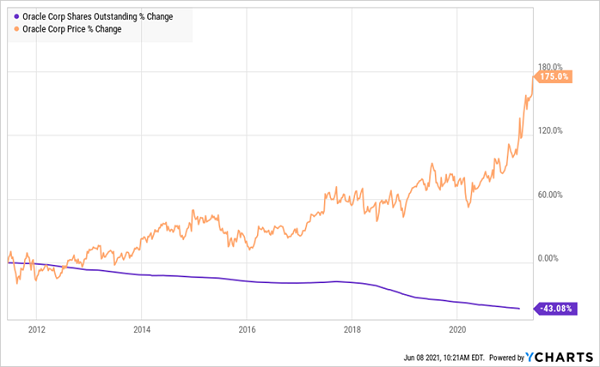 To bring this full circle, when you combine Oracle’s buybacks with its current dividend payout, you get its shareholder yield—or what I call its “true” yield—what it’s paying us in the form of dividends and buybacks!

That comes out much higher than the 1.8% dividend yield—it’s more like 8.4%! And the shareholder yield on a buy made today will only grow from here as buybacks and dividend growth continue.

The formula for figuring out a company’s current shareholder yield is pretty simple: take the amount spent on share repurchases in the last 12 months, deduct any cash brought in through share issuances, then add in the total spent on dividends. You then take that sum and divide it into the company’s market cap, or the value of all its outstanding shares. 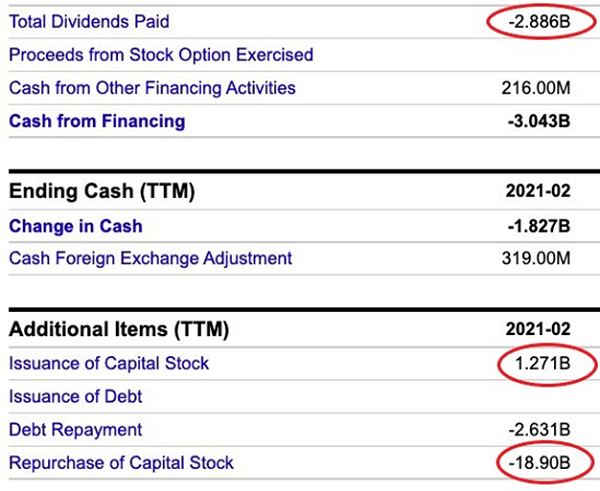 In Oracle’s case, that comes out to an 8.4% shareholder yield, based on its $244.09-billion market cap as of the time of this writing.

The only hitch? To capture this big yield, we still have to buy and hope that buybacks kick in and work their magic, which doesn’t always happen, at least not right away. But we can remedy that by emphasizing stocks that get more of their shareholder yields from dividends.

Consider insurance giant MetLife (MET) which boasts a trailing-12-month shareholder yield of 6.2% and a forward dividend yield of 3.0%. That’s a pretty balanced setup.

That split results from MetLife’s balanced approach to buybacks and dividend hikes: it’s taken 20% of its stock off the market in the last five years, while growing its dividend the same amount. 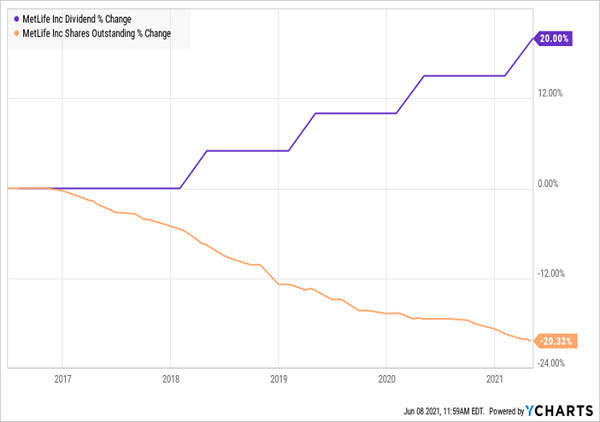 MetLife can keep the shareholder-yield train rolling, thanks to a very safe payout ratio: as I write this, the company pays 15% of free cash flow as dividends.

Oracle and MetLife are both attractive from a shareholder-yield standpoint, but you’ll find even better bargains, with more upside, in the portfolio of my dividend-growth advisory—not coincidentally named Hidden Yields.

I want to share this exclusive portfolio with you today: it boasts 17 buys with huge shareholder yields built through fast payout growth, skillfully executed buybacks—or both.

The names and tickers of all 17 of these cash machines are yours when you try the service with no risk and no obligation for 60 days.

And that’s not all: I’ll also give you an exclusive special report naming my 7 very best buys for your portfolio now.

These 7 picks are all doing exactly what we need them to: kicking out huge yearly dividend increases that are boosting their stocks in lockstep!

Buy These 7 Stocks Now—Before Their Next Dividend Hike

Pick No. 1 is a great example. It cranks out semiconductors for 100,000 clients. What’s more, its semiconductors are made for very specific tasks and products, and this customization makes its products “sticky” because its customers invest their own R&D dollars to write software that runs specifically on these chips.

In other words, once a customer … always a customer.

That’s leading to surging cash flow as demand for tech gadgets continues to ramp up. And management is handing that cash to investors as a dividend that’s surged 168% in just the last five years! That’s driven its share price, point for point: 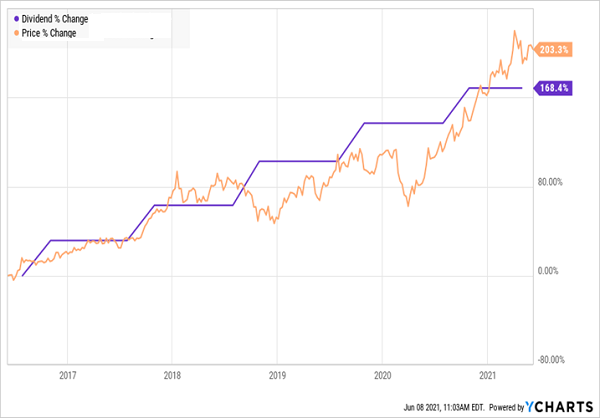 The other 6 stocks in this report all have dividends that are surging just like this, and I expect their share prices to ride their payouts up over the next 5 years, too!

The time to buy all 7 is right now. Go here and I’ll give you this exclusive special report, with full details on all 7 of these stout dividend growers. It’s yours with a 60-day no-obligation trial to Hidden Yields, including the names, tickers and updated advice on all 17 dividend-growth buys in our portfolio.