Today I’m going to show you how to grab two growing income streams—in just one buy. Plus, we’re going to bank double-digit price profits to boot.

Two other things you should know: our “new” dividend(s) will likely grow even faster than our original payout! And we won’t have to do anything to get this extra cash.

The Profit Power of “Dividend Splits”

The dividend-growth wave this “dividend split” can unleash is massive. To see what I mean, consider pharma monolith Pfizer (PFE).

Sure, it looks like a decent dividend grower, having hiked its payout 138% since the end of the financial crisis. But that was 11 years ago! Really, all Pfizer has done is add 2 cents a share to its quarterly payout every year. 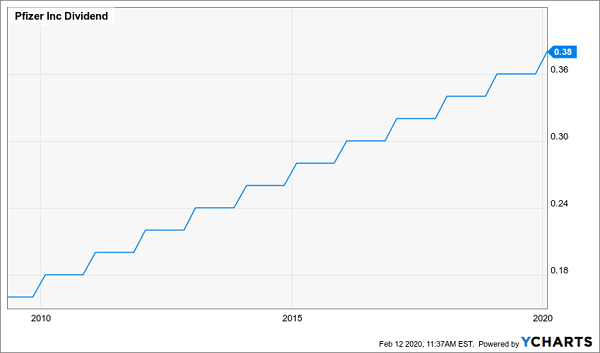 That’s not enough to get it on the radar of my Hidden Yields dividend-growth advisory, where we focus on dividends that not only grow but accelerate. That’s critical, because it drives up the yield on our original buy in short order. A fast-rising dividend is also the No. 1 driver of share prices because it grabs the attention (and investment dollars) of the income-starved masses.

This is where the spinoff comes in, because Pfizer did something in 2013 that handed its investors a second, and accelerating, income stream: it spun off its animal-health subsidiary, Zoetis (ZTS).

The company did so by letting its shareholders swap their Pfizer shares for new Zoetis stock at a 7% discount—a pretty sweet deal.

Zoetis went on to nearly triple its dividend in just seven years. That, in turn, drove its share price up. As you can see below, its stock jumped right along with Zoetis’s soaring dividend—point for point, driving the shares to a 341% rise. 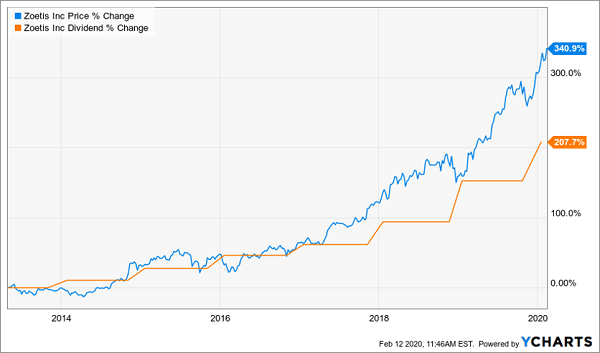 Studies have shown that new spinoffs tend to beat other companies in their sector over time, and that’s been the case with Zoetis (ZTS), which has topped the iShares US Pharmaceuticals ETF (IHE) since going out on its own: 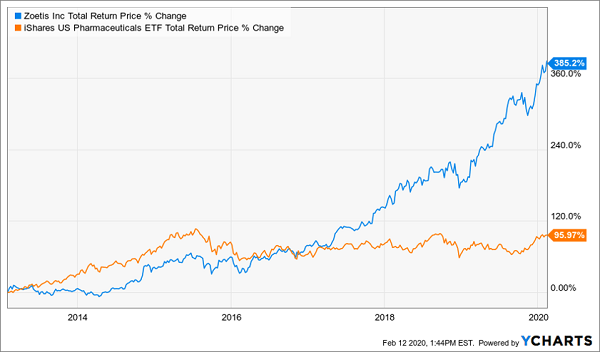 It’s not alone; we’ve also seen fellow pharma play AbbVie (ABV) go on to outrun IHE since its spinoff from parent Abbott Labs (ABT) in 2012: 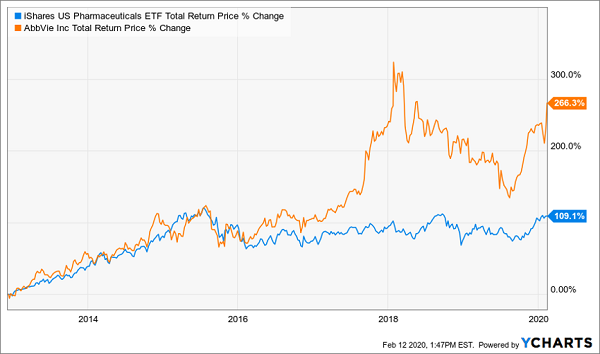 Like Zoetis, AbbVie threw off a faster-growing payout than its parent, helping it deliver that big 266% total return, well ahead of Abbott’s 239% in the same period:

… and Nearly Triples Its Payout 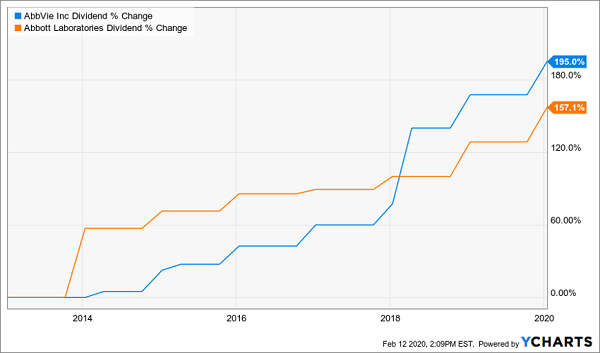 Spinoff outperformance isn’t limited to healthcare, either. Check out how one of the biggest tech spinoffs in history, PayPal (PYPL), in blue below, has manhandled the Technology Select SPDR ETF (XLK), in orange, and the SPDR S&P 500 ETF (SPY), in red, since eBay (EBAY) cut it loose in 2015. 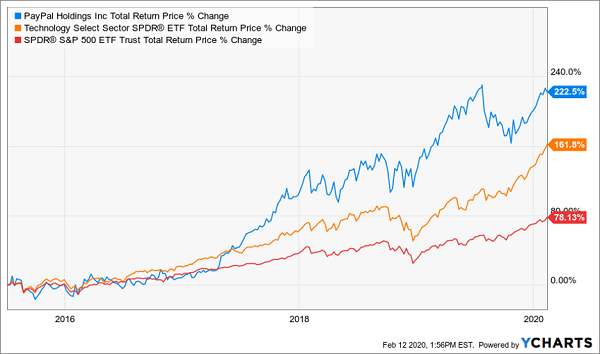 That’s just from price gains. Imagine how PayPal would have done if it paid a dividend!

Our Spinoff Strategy in Action

So what’s the takeaway?

Simple: if you look for stocks with growing dividends, rising profits and divisions that don’t have a lot of overlap with the rest of the company, and could easily be sent out on their own, you could set yourself up for two fast-growing dividends—and some nice gains, too.

Sometimes you don’t even need to wait for the spinoff to be completed to grab those profits: just news of a spinoff can send a stock soaring.

That’s what happened with Synnex (SNX), a stock I recommended to Hidden Yields subscribers just four months ago, in October 2019.

You’ve probably never heard of Synnex; it custom-designs IT solutions, mainly for businesses and government clients.

As a tech-startup veteran myself, I’d been watching the company closely. I love its business model, because it doesn’t take on the risk of developing new systems itself; instead, it buys businesses with established products, then cross-sells those products to its growing roster of clients.

It’s a proven model that was paying off nicely for investors in the form of a skyrocketing dividend.

And unlike with Zoetis, Synnex’s share price had parted company with its payout growth a few months earlier—one of my go-to indicators that it’s time to buy: 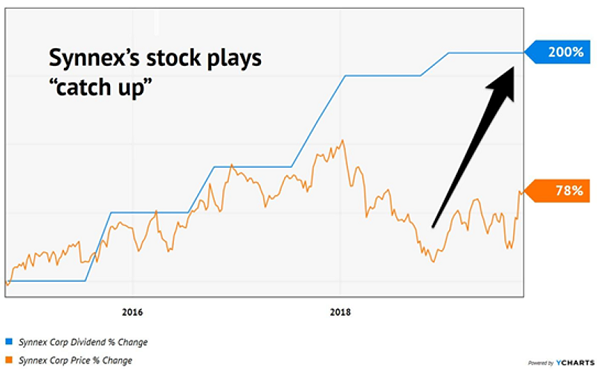 How did we make out? In just four months, we’ve bagged a 24% total return, doubling the market’s performance as the stock raced to “reel in” its payout. 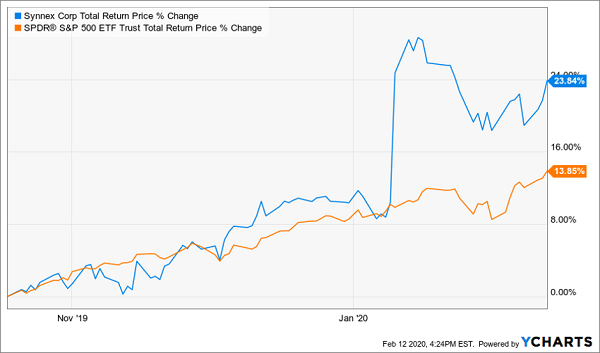 Here’s the twist: the big jump that triggered our win was news that Synnex would be spinning off its Concentrix division.

In hindsight, Concentrix was crying out to be spun off: it provides customer-service solutions and works with all of the world’s top 10 car brands, seven of the top 10 tech companies in the US, and 80 clients on the Fortune 500 list. This arena makes up 20% of Concentrix’s overall current business, and it’s growing fast.

And remember that we bagged this gain before the new shares have even started trading! When they do, we’ll own shares in both companies. We’ll then decide whether to continue holding Concentrix (we’ll be requiring a dividend!), as well as parent company Synnex (don’t slow that payout growth!).

Late to the Party? Doesn’t Matter With Spinoffs

Here’s one final point on spinoffs: you don’t have to buy them right after (or before) the breakup is announced. Sometimes the move is still unlocking value years later.

That’s been the case with another Hidden Yields pick, Allegion (ALLE), which I recommended in April 2019 because it was showing the same setup as Synnex, with a share price badly trailing its dividend growth:

Allegion Was Ready to Jump in April ’19 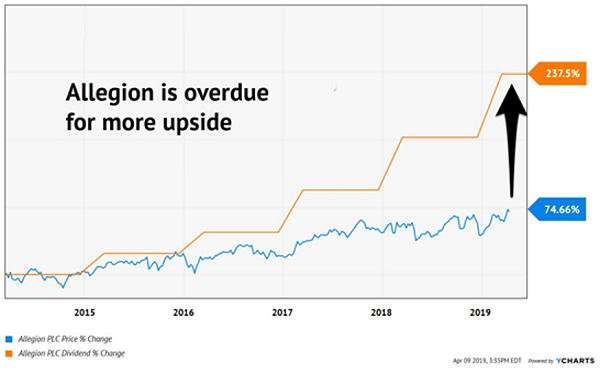 Allegion was spun off from parent company Ingersoll-Rand (IR) in 2012, for good reason: it makes locks, including under the common brand Schlage, a business that’s completely separate from IR’s core heating and cooling operations.

Our late move into this spinoff has certainly paid off: in just under a year, ALLE has delivered a 49% total return, easily dispatching the S&P 500:

Our Other Spinoff Pick Roared, Too 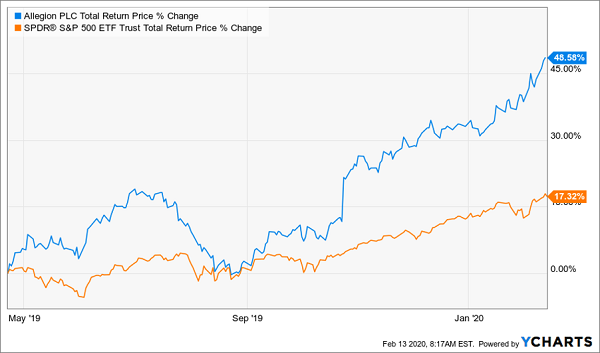 The bottom line? A current or past spinoff, combined with a soaring dividend, can nicely set you up for rising profits (and income) in the long run.

Look, I’m not going to spend this whole column rehashing past calls—so let’s look to your future—and dive into the 7 dividend-growth picks I have for you now.

These 7 stout dividend plays are sitting on cash piles they can’t send out the door fast enough! And there are plenty of bargains in this bunch, with share prices badly trailing their surging payouts.

It’s only a matter of time before they race to catch up—nicely positioning you for double-digit upside as they do!

And yes, I wouldn’t be surprised if one or more of these picks does a spinoff, and hands us a nice double dividend stream, and rising price gains, too.

But either way, I’ve got each of these 7 solid dividend growers pegged to return 20% in dividends and gains, year in and year out, on average. That’s enough to double your nest egg every four years!

Don’t be left behind as other investors grab these 7 stocks and start building their income streams (and account balances!). Discover everything you need to know about all 7 of these “dividend doublers” now: names, tickers, best-buy prices, full dividend histories (and my payout predictions)—literally every bit of research I have.