Let’s talk about last Friday’s market crash and the wobbly markets we’ve seen since. Because at times like this, our closed-end fund (CEF) dividends are a key tool to help see us through.

As seasoned CEF investors know the standout strength of these 500 or so funds is their high payouts, which yield around 7%, on average today. Payouts like those can tide us over until we get to the other side of a market meltdown.

So what’s our strategy? In CEF Insider, as with all of our Contrarian Outlook premium newsletters, we’re staying light on our feet, ready to sell struggling holdings quickly, and to pick up bargain-priced dividend payers when they appear.

Our dividends also give us the high ground over those who simply buy the popular names of the S&P 500 and sit tight: most of our picks yielded 6% or more when we bought them and, overall, payouts have actually gone up, in part due to the large yearly special dividends we get from the Adams Diversified Equity Fund (ADX).

And 15 of our 23 CEF holdings pay dividends every month, which lines up with our bills. That’s a plus that reduces our need to sell into the whipsawing markets we’ve seen in the last two years:

Healthy, and Monthly, CEF Dividends Let Us Ride Out the Storms 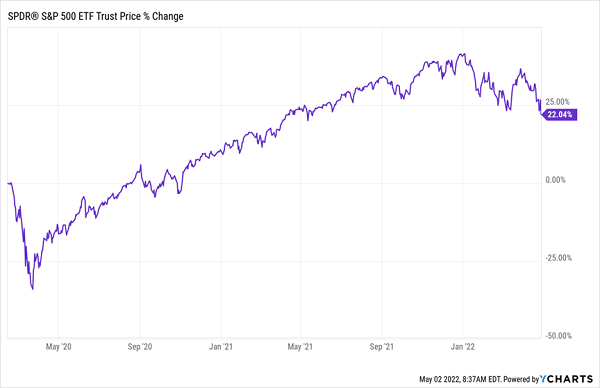 I know that can seem like cold comfort when we’re watching our accounts slide into the red on a daily basis, but do bear in mind that corrections like these are part of the cycle—they shake out speculations and set the stage for the market’s next run higher (notice that profitless tech stocks and crypto—Bitcoin is down 43% from its November peak—have taken particularly staggering hits this time around).

So what lies ahead? The truth is, we’re in unprecedented times, and volatility is likely to get worse before it gets better. But there are indicators (including one from the Federal Reserve) that give us an idea of when the market might turn.

Before we get to that, let’s look at where we are now. The NASDAQ, with a plunge north of 20% from its latest peak, has fallen nearly as much as it did during the March 2020 drop (hard as that is to believe), as of April 30, while the S&P 500 and Dow Jones are about three-quarters of the way there, from their latest peaks: 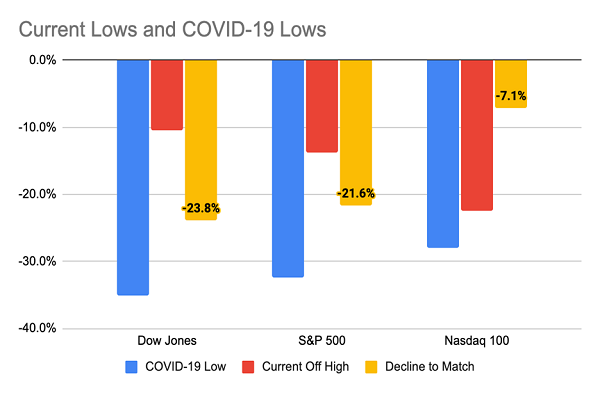 Now let’s compare the economy now to the economy then: two years ago, COVID-19 shut down the world, with no vaccines on the horizon.

Today? Yes, first-quarter GDP showed a 1.4% contraction on an annualized basis, but that was mostly because of the US trade deficit, which is subtracted from the bottom-line number. Consumer spending is still healthy, up 2.7%, and the blended corporate earnings growth rate for Q1 is 7.1%, according to FactSet, which is also a decent performance (this figure blends earnings from companies that have reported with estimates on those that have yet to). Businesses also kicked in, increasing their spending on equipment by 15.3%

With all of this in mind, there’s no reason to think stocks would go as low as they did during the COVID-19 crash. And in the unlikely circumstance they do, the market would clearly be oversold.

Rate Hikes Likely to Be Sharp—and Then Slow Quickly

That’s all well and good, but we haven’t yet discussed the main actor in all of this, the Fed, which, after fueling stocks with rate cuts and quantitative easing, is now reversing both to clean up the inflationary mess it’s made, with a 50-basis-point hike announced yesterday and futures markets now expecting: 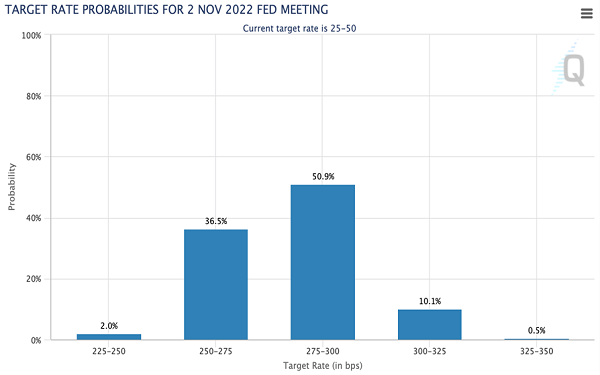 Above we see the market’s expectations for the Fed’s interest-rate target by the beginning of November, six months from now, as of this writing. And we can see the forecast for November has rates between 2.75% and 3%, which is right around where they peaked in the last rate-hike cycle, which terminated in 2018.

This is good news because the 2018 peak is likely a reasonable indicator for the current rate-hike cycle, especially given that levels of debt—including consumer, government and business debt—are much higher today, which amplifies the effect of each rate hike.

In other words, if the Fed gets to a “normal” level for interest rates (which, looking at the last few decades, would be around 2.5%) and the economy responds, as it appears likely to, the central bank could ease up on hiking rates. That, in turn, would mean we’ll be talking about rates stabilizing or even falling toward the end of 2022 and in 2023. Both scenarios are good for our CEFs, especially funds that hold cash-rich techs, which have been unfairly dragged down by their speculative cousins.

As we just discussed, when volatility picks up, CEFs’ high dividends give us a hedge. Monthly paying CEFs are even better because their payouts are perfectly aligned with our bills.

There’s another reason why we love monthly paying CEFs: a dividend is a promise to investors—one that has a lot of consequences for a fund’s (or a company’s) share price if it’s broken. And the fact that our CEF managers are sending out a payout every month proves that they’re confident they can keep that promise.

That’s just the kind of swagger we want in a market like this, and I’ve got 5 monthly paying CEFs that are the perfect examples. They trade at deep discounts and yield 7.9%, on average.

With markets behaving the way they are, there’s never been a better time to buy them. Click here and I’ll reveal details on 5 of these 7.9%-yielding monthly payers.