Follow the Rent: 3 REITs at the Top of Their Game

Real estate investment trusts (REITs) as a group have been kicked to the curb this year. The sector has returned negative 1.3% including dividends—third-worst among the S&P 500’s 11 sectors, and miserable showing compared to the index’s 16.5%.

But note that I said “as a group.” Some landlords are doing just swell.

The secret to REIT picking, right now, is to identify the companies that are still collecting payments like it’s 2019.

“This update focuses on three property subsectors: apartments, free standing retail, and shopping center retail, given that rent collections in the industrial, office, and healthcare sectors have stabilized at high levels,” NAREIT says (emphasis mine).

One big takeaway from this is that industrial tenants have been among the most reliable. No big surprise there: Warehouses, distribution centers and other industrial facilities were certainly shaken early on in the pandemic by logistics nightmares, but they’ve largely been booming in the ensuing months.

Income investors looking for dividends and some peace of mind, then, should be laser-focused on this area of the real estate industry.

Let’s discuss some of these first-class operators:

I love a stock that serves an important niche.

You might guess from the name how Americold Realty Trust (COLD) stands apart from its industrial REIT peers. It boasts an “unmatched” network of temperature-controlled supply-chain real estate primarily serving food producers, retailers and service providers.

Americold isn’t just some passive landlord, either. The company works with its clients to develop full supply-chain solutions, helping to design, build and even operate facilities to their specifications. Thus, COLD doesn’t just collect rent—it also brings in revenue from warehouse, transportation and other services.

COLD is both a pure play on economic growth, but also on e-commerce trends as food-delivery services continue to expand. No wonder, then, that the REIT has been experiencing steady if not exciting growth for years. 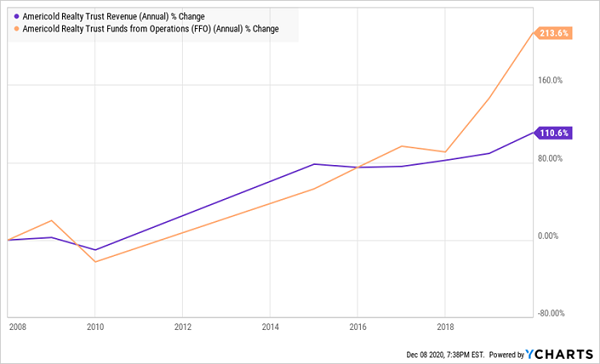 Americold has been a resilient stock, dropping by less than 20% at their March nadir, thanks in large part to the fact that revenues are actually up by double digits across 2020. But expenses have climbed up thanks to understandably thorough measures to prevent COVID spread in its facilities, weighing a little on funds from operations (FFO) and keeping its stock slightly in the red year-to-date.

But COLD is hardly cheap right now. Despite its slow 2020, you’re only getting about 2.5% in annual yield, well below the 4.1% of the Vanguard REIT ETF (VNQ). Even more jarring is that it trades at 27 times FFO estimates, which is far higher than we should be eager to pay for all but the most elite, no-brainer REITs.

Rexford Industrial Realty (REXR) also satisfies the itch for niche, specializing in industrial real estate in Southern California, which, at least for now, is the largest and “most sought-after” industrial property market.

Rexford provides a little perspective here: “Measured by square feet, the Southern California industrial market would be the fourth largest global market, lagging in size only to the entire countries of the U.S.A., China and Japan,” adding that it also represents the same economic value as “as the next four to five largest U.S. markets combined.” 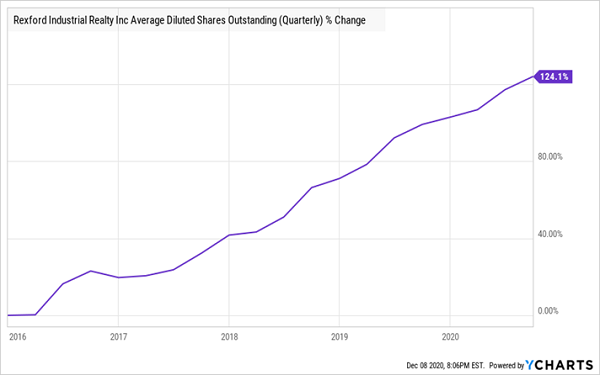 The REIT has more than doubled its share count over the past five years. It’s a dilutive measure that in theory (and sometimes in practice) robs shareholders, but no one’s complaining here given REXR’s outstanding growth and performance.

Tripling Shareholders’ Money Does the Trick 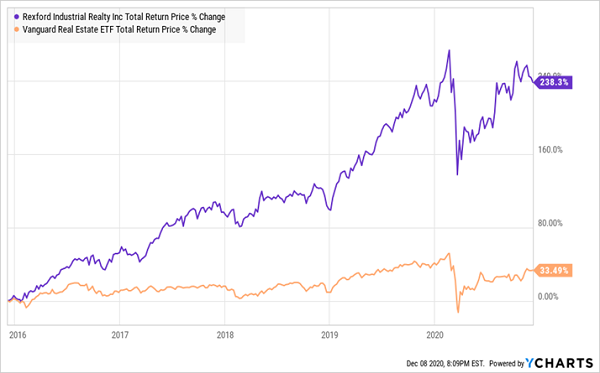 But Rexford might be ready to hit a wall again. Shares have ballooned to a massive 36 forward P/FFO—so, that’s based on even higher expected earnings next year—while the yield has withered to just 1.7%. While you might have to pay to get growth, you don’t have to pay that much.

Terreno Realty (TRNO) is much closer to a traditional industrial REIT. It doesn’t have a specialty like Americold, nor is it regionally hyper-focused like Rexford.

But it still has a “hook” so to speak. The company’s roughly 220 buildings are located in and around six major metropolitan centers, such as NYC and LA, on the East and West Coasts. Nearly 90% of the portfolio is in submarkets where industrial supply is either flat or shrinking.

Terreno’s portfolio companies are on average in much higher population density locations compared to its industrial REIT peers. Thus, it makes heavy use of “infill” real estate, often renovating or redeveloping properties to make more efficient use of the space.

Even at its worst this year, TRNO only dropped by about 20% as most investors understood that the company’s properties would become essential in the COVID “new normal.” It’s now up about 5% this year, it actually raised its dividend (from 27 cents quarterly to 29 cents) for the October payout, and it almost reclaimed its all-time highs in July…

…and in August, and in October, and in November. 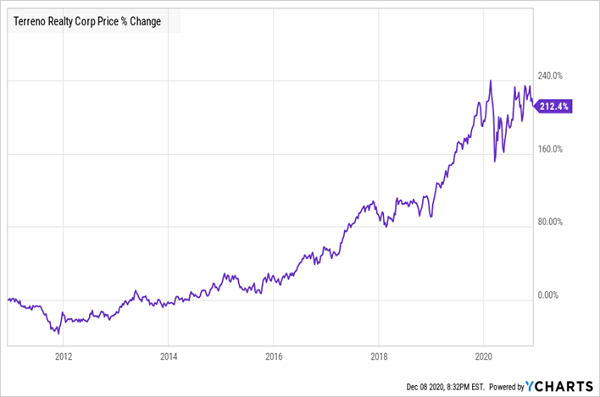 I doubt the bottom’s about to fall out on Terreno, but who can blame investors for refusing to bid the stock up any higher? Not only is the 2% yield miserly for the sector, but even after a small recent dip, TRNO still trades at a gaudy 37 times forward FFO estimates.

Give Me 4 Minutes, Grow Your Income By 4X

These smaller industrial REITs aren’t alone. Duke Realty (DRE), whose tenant list is a who’s who of e-commerce giants, trades at 24x FFO estimates and yields 2.5%. $70 billion powerhouse Prologis is a dividend-growth dynamo, but it’s priced for perfection at 26x FFO estimates and a 2.4% yield.

It could take another once-in-a-generation flash crash to get reasonable prices and sizable yields on these REITs. But most retirement investors can’t afford to wait five or 10 years to put their money to work generating safe, juicy yields.

Fortunately, you don’t have to wait—the blue-ribbon yielders in my “Perfect Income” portfolio are within the “right price” window, right here, right now.

The market’s recent volatility has been for a few good “mini-bargain” dip-buys. But it has done little to bring up the yield on what is a chintzy market for dividend investors.

That’s not exactly going to fund the rich, financially free lifestyle you worked so hard for, is it?

But the dividend-rich stocks in my “Perfect Income Portfolio” can deliver the returns—and the peace of mind—that you’ve earned.

I frequently talk to my readers, who tell me that these stocks have managed to double, triple and sometimes even triple the dividends they were earning from their old income portfolios. 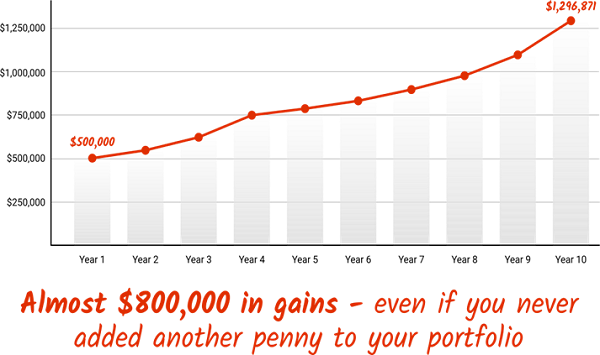 Take control of your financial legacy today. Let me show you how to get up to 4x your current income with this simple, straightforward system. Click here to get a FREE copy of my Perfect Income Portfolio report, including tickers, buy-in prices, dividend yields, full analyses of each pick … and a few other bonuses!