Everyone’s Wrong About This 4.6% Dividend (It Will Double)

Don’t listen to the naysayers—tech stocks are set to thrive in the coming months, and the sector is still a great place for us to go hunting for big, and growing, dividends.

Here’s one reason why: despite worries about rising interest rates, the Federal Reserve is likely to keep its key lending rate near zero. That, in turn, means businesses, and especially innovative tech players, will continue to have access to cheap money to invest in new products.

This low-rate world also means investors starved for income will crowd into any higher-paying investments they can spot (including high-paying tech funds like the one we’ll discuss below). That influx will be helped by the fact that Treasury yields are likely to stay roughly where they are today, at a meager 1.6%, going by the expectations of the futures market.

If this sounds like a familiar setup, it’s because a long-term low-rate environment was the reality through most of the 2010s, and it fueled the strong stock-market returns we saw back then. 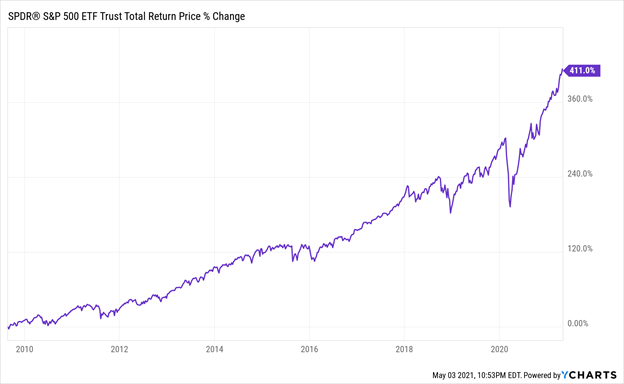 And of course, rock-bottom rates continued to push stocks higher after the March 2020 collapse. So while continued low rates—along with unprecedented government stimulus and Americans releasing the cash they’ve saved during the pandemic into the economy—will likely fuel higher inflation, we’re likely to see a continued rise in the market, too.

Right now, the derivatives market is predicting the Fed’s lending rate will stay near zero until 2024, when it will begin to gradually rise. Three years of low rates is a long time for companies to borrow and invest in their businesses.

A great way to target the firms getting the most bang for their investment buck is through a closed-end fund (CEF) called the BlackRock Science and Technology Trust (BST). It holds big tech stocks with sky-high R&D spending, like Apple (AAPL), Microsoft (MSFT) and Amazon (AMZN).

(Members of my CEF Insider service will recognize BST: the last time we held the fund in the service’s portfolio, from August 2019 to June 2020, it handed us a nice 26% total return.)

BST’s high-quality portfolio and growing dividend (current yield: 4.6%) make it worth a look today—and definitely worth a look on any short-term rate-panicked dip in the markets (which we got a hint of last week, when Treasury Secretary Janet Yellen said rates may have to rise sooner rather than later, then quickly backtracked).

Such a pullback would bring BST’s premium to net asset value (NAV, or the value of its underlying portfolio) down from 9% and closer to par (this fund regularly trades at premiums, so I have no problem paying a bit more than par for it, because a slight premium is still a good deal, historically speaking).

Let’s move on to BST’s 4.6% dividend, which is far more than you’d get buying its portfolio of tech names on their own (and would be higher for you if you bought the fund on a dip). As I mentioned earlier, this payout is also a magnet for income-seekers looking for payouts higher than the 1.3% the typical S&P 500 stock dribbles out, or the 1.6% yield on US Treasuries.

When it comes to performance, BST boasts a sterling history: it’s been crushing the passive ETFs that track the S&P 500 and the NASDAQ since it launched in 2014—something the prevailing investment “wisdom” tells us actively managed funds like this one aren’t supposed to do! 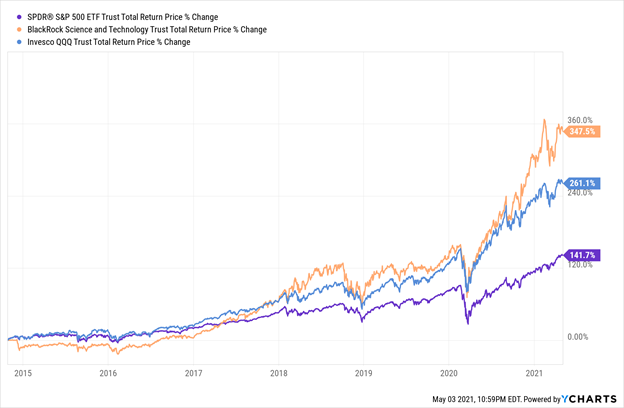 As you can see above, the S&P 500, shown by the performance of the SPDR S&P 500 ETF (SPY), has delivered 141.7% returns since BST launched, while BST has more than doubled that with a 347.5% total return. That’s also even more than the tech focused Invesco QQQ Trust (QQQ), which focuses on the tech-heavy NASDAQ 100.

Meantime, BST has not only maintained its payouts but raised them over the life of the fund, in addition to paying a massive special dividend in late 2019.

A High Yield That Grows (With Regular Special Dividends, Too) 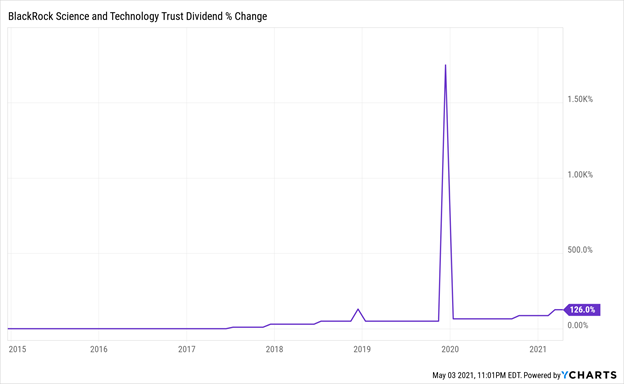 My take? Keep a sharp eye on BST. If you see a pullback in its premium, seriously consider adding it to your portfolio. Aside from its attractive dividend, the fund is nicely positioned to gain as low rates encourage tech companies to borrow and invest in further R&D.

This Unsung Tech CEF Is Cheap Now (and Its 5.5% Payout Is Surging)

While you’re waiting for BST to come back down to our buy level, I’ve got another tech fund that’s dirt cheap—and ripe for buying—now. It’s tied to the surging growth of artificial intelligence, the market for which is forecast to jump 46% in 2022 alone.

Now, you’d normally have to forsake all dividends and buy a more volatile stock to tap into a surging tech trend like AI, but not with this fund. It targets not only AI developers but also stocks that benefit from the use of AI, like insurer UnitedHealth Group (UNH) and industrial giant Deere & Co. (DE).

And talk about dividends! This fund pays 5.5% today, more than BST offers, and it recently raised its payout 15%. And unlike with BST, I recommend running out and buying this one NOW: it trades at a totally undeserved 6% discount, letting us buy in for 94 cents on the dollar!

This breakthrough fund is part of a 5-CEF “mini-portfolio” I’m urging investors to buy now. The funds inside it yield 7.3% on average, and they’re all cheap, setting us up for 20%+ in price upside!

I’m ready to share full details on this breakthrough tech CEF, and the other 4 funds in this carefully crafted portfolio (which span the economy, with holdings ranging from stocks to real estate investment trusts to corporate bonds). Go here and I’ll give you everything you need to know about these 5 funds: names, tickers, dividend histories and much more.