Everyone Has Missed This Amazing 95-Year-Old Fund (Which Yields 9.8%)

Let’s use this November rally to “front-run” even bigger gains in 2023. Our target buys: closed-end funds (CEFs) yielding 10%+ and trading at double-digit discounts.

We’re keen to move now because, with a 20%+ loss this year, stocks (and the CEFs that hold them) are way oversold. And with the market’s tendency to rise into year-end (the much-loved Santa Claus rally), now is a great time to buy.

One smart option here is a CEF called the General American Investors Company (GAM), payer of a 9.8% dividend. GAM is one of the most reliable CEFs there is, with roots stretching back to 1927. But despite that long history and a portfolio full of strong cash-flow generators like Microsoft (MSFT) and Berkshire Hathaway (BRK), we can buy GAM at a 16% discount to net asset value (NAV)!

A Santa Claus rally could see that discount vanish. And looking into 2023, I see bullish signs for this fund—and all the equity funds in my CEF Insider service’s portfolio, too.

Let’s look at those signs now, then talk more about GAM and our portfolio CEFs. Further on, I’ll give you a chance to dip into the CEFs held by CEF Insider—average yield: 10.1%—risk-free.

2023 Profit Indicator #1: A Recession Is Already Priced In

Perhaps the most important indicator is the simplest one: the recession everyone is calling for—if it comes—is priced in.

GDP Growth Up, Stocks Down 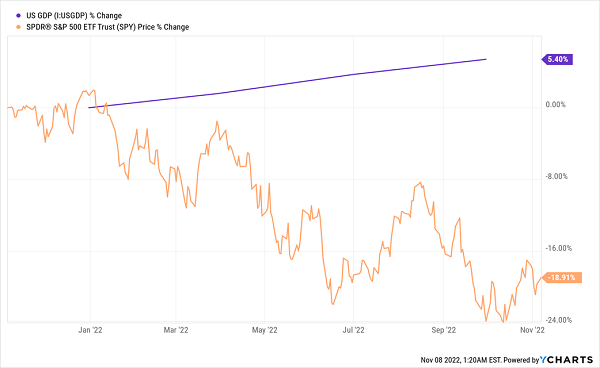 While inflation has hit the US economy, we’ve still seen growth in 2022, largely on the strength of strong consumer spending. Disposable personal income rose 6% in the third quarter on healthy employment and rising wages.

If the Federal Reserve is successful at lowering housing costs (and so far, the data suggests it has been), Americans could have more extra money in 2023, which will benefit the big US firms GAM holds.

Speaking of the Fed, shouldn’t that be our biggest concern in 2023? Not really. While there’s less certainty about exactly when the Fed will stop raising rates, there is consensus that it will indeed happen early next year.

Jerome Powell has said as much. And if we look at the dot plots the Federal Reserve releases, we can see that the central bank expects to stop raising rates next year, when we hit a 4.75% target, 100 basis points above today’s level. That would suggest the rate hikes will end in February or, at the latest, March. 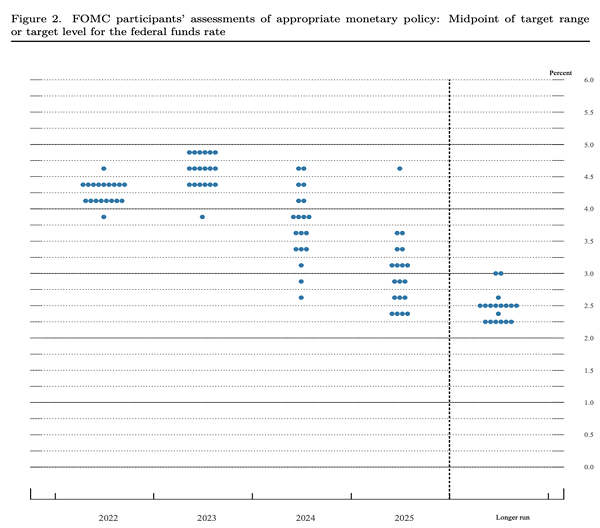 Since the Fed also expects to start cutting rates by 2024, next year’s market talk will be all about when the cuts start. And since rate cuts are bullish for stocks, expect investors to move well before that chatter begins. Of course, we can beat them by buying now.

Add to this the fact that 2023’s inflation numbers will be comparing themselves to this year’s high levels, and you can see how the Fed will likely have room to back off.

2023 Profit Indicator #3: Great Stocks Have Been Pulled Down By Lousy Ones

My final reason for bullishness is the most compelling: selling of some silly asset bubbles has spilled over into high-quality companies, resulting in bargains.

Take three examples: Facebook parent company Meta (META), Google parent company Alphabet (GOOGL) and Bitcoin. The crypto bubble has burst, and Bitcoin has fallen over 50% in 2022, while Mark Zuckerberg’s decision to tie his company’s future to crypto and the blockchain has caused Meta stock to fall further. This is a rational selloff, but look at how it has affected Alphabet (in blue below), as well. 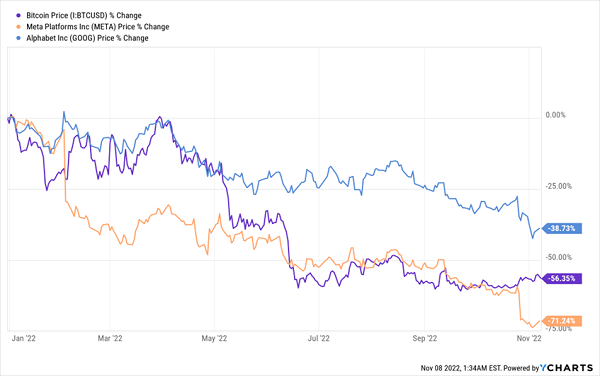 This is silly because Alphabet’s free cash flow per share has risen nearly 200% in the last decade and is likely to remain at that level for some time.

Alphabet Is a Cash Machine 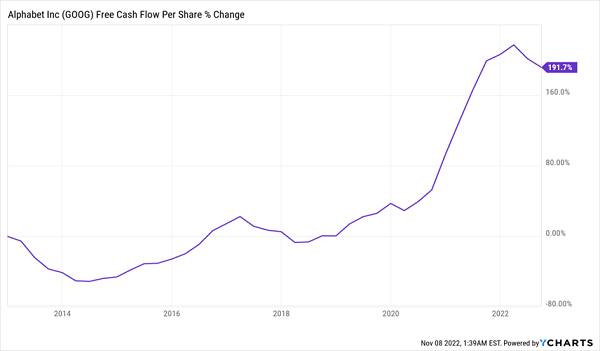 This is one of many examples of great stocks that have suffered because of contagion. That gives buyers of these bargain stocks (and CEFs) even more upside next year.

Why GAM Is a Good Choice for This Market

CEFs like GAM were made for times like this. With that 16% discount I mentioned earlier, we can buy the fund’s solid assets—its biggest holdings are Republic Services (REP), Microsoft and the aforementioned undervalued Alphabet—which have helped GAM post a 9.5% annualized return over the last decade.

Plus, thanks to GAM’s focus on returning as much profit as possible to shareholders, we’ll collect its outsized dividend, which, as mentioned, clocked in at 9.8% over the last challenging 12 months.

Why You NEVER Hear About 9.8%-Yielding CEFs Like GAM

We rarely hear about CEFs because the big asset-management companies (many of which manage CEFs and ETFs) have a vested interest in keeping them from you.

After all, if more people knew about the outsized 9%+ dividends available in CEFs, they’d never buy an ETF again!

Those dividends are our key to big profits in 2023, because they’ll look very attractive to investors as they turn their attention back to stocks next year, and as Treasury yields slide (which I expect, as interest rates moderate).

We want to be in well before that happens.

GAM is a great place to start, and the 5 other CEFs I’ve uncovered match up with it beautifully. They yield 9.1% on average, and their discounts are so deep I expect 20%+ price gains in 2023, to go along with our rich payouts.

Click here and I’ll share my CEF-investing strategy with you. I’ll also give you these 5 CEFs’ names, tickers, current yields and more in an exclusive Special Report.