Dividends Soon to Be “Unleashed” for Hikes Up to 100%

These dividends are about to break free from their regulatory shackles. Once the cuffs are off, we’re going to see payout hikes up to 100%.

Even the dividend growth “laggards” in this group are due for 11% and 17% hikes. As these payouts pop, their stock prices may certainly follow.

For the past decade, income investors have overlooked the big banks. The Great Recession burned a hole in the brain of every retiree who lived to tell about it.

The U.S. Treasury bailed out America’s financial sector with the Troubled Asset Relief Program, which disbursed roughly $427 billion to buy toxic assets from (and even equity in) U.S. banks. But that naturally came with a hitch – participating banks faced restrictions on executive pay, stock buybacks and, most notably, dividends.

The sector’s payouts collapsed as a result.

While those restrictions were lifted as banks repaid their TARP loans, banks still had to contend with 2010’s Dodd-Frank Act. Among other things, the financial reform law established a Federal Reserve practice of “stress testing” the nation’s major banks to ensure they would have enough capital to withstand financial shocks and adverse economic conditions. If a bank can’t prove it can handle the Fed’s hypothetical scenarios, the Fed can bar it from repurchasing stock or increasing its dividend.

For the most part, however, once the big banks broke free from their TARP-related regulatory shackles, they were quickly able to rebuild the necessary financial buffers, and their dividends began to steamroll higher. Take JPMorgan Chase (JPM)—its payout quietly popped 260% over the past decade! 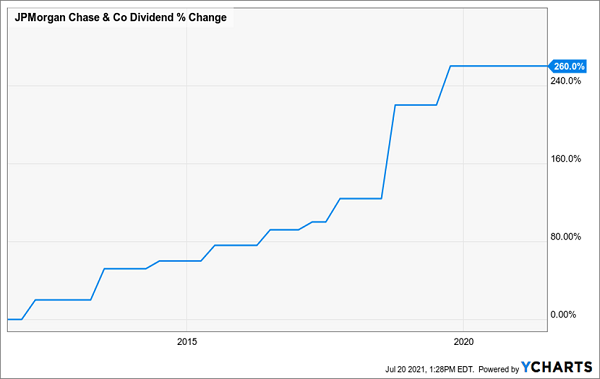 This time around, we’re going to see more of the same from the House of Morgan and its banking brethren.

Perhaps with 2008-09 on its mind, the Federal Reserve last year decided to act proactively during the COVID-19 crisis. While the central bank said the 33 financial institutions it tested effectively passed, many did so with minimal cash reserves to spare. So, in June 2020, the Fed suspended stock buybacks for the third quarter and barred banks from raising their dividends for the year.

Fast-forward a year, and the Fed announced it would lift those COVID-era restrictions.

With these regulations set to fade into the background of financial history, we’re looking at dividend hikes of 11%, 17% and even a couple of dividend doubles (yes, 100% increases) …

… but Citigroup (C) won’t be among them.

While Citigroup, the nation’s No. 4 bank by assets, passed its latest stress test, the company was the lone “Big Six” bank to keep its dividend level.

Still, Citi does plan on returning capital to its shareholders (emphasis mine):

“We look forward to continuing with our planned capital actions, including common dividends of at least $0.51 per share, and to continuing share repurchases, which are particularly attractive when our stock price is below tangible book value per share.”

Citigroup believes it has identified an intelligent way to deploy its capital, though that’s hardly salve for income investors. But perhaps this is: Citigroup already boasts the strongest yield among its big-bank competitors.

Citigroup Delivers a Respectable 3%-Plus 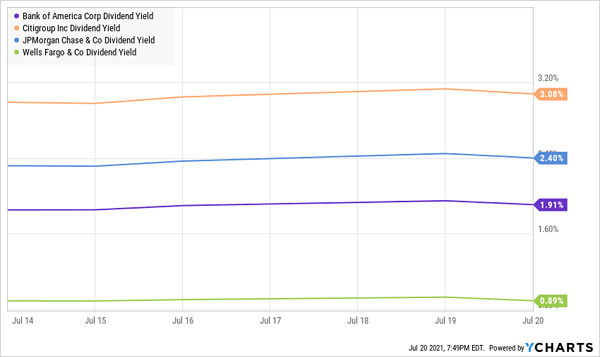 Still, Citi’s dividend remains unchanged since August 2019—not exactly ideal if you bought C shares at least in part for their income production.

JPMorgan Chase (JPM), which boasts more assets than any other bank in the nation, will push ahead with the smallest dividend increase among America’s largest financial institutions—a nonetheless generous 11.1% hike that follows a 12.5% improvement back in the latter half of 2019. At $1 per share if approved, JPM would yield 2.7%.

JPMorgan Chase will go forward with buybacks, too, though it’s difficult to say exactly how much. The bank OK’d a $30 billion buyback program at the end of 2020; but in announcing its dividend hike, JPM merely said “the Firm continues to be authorized to repurchase common shares under its existing common share repurchase program previously approved by the Board of Directors.”

Bank of America (BAC) is in a similar boat as JPMorgan, announcing plans for a 17% dividend hike, to 21 cents per share (2.2% projected yield), that would seem generous in most years, but seems lackluster in 2021 compared to some peers. It also previously announced a buyback authorization—of $25 billion, outlined in April—though it hasn’t specified how much of that authorization it will use in the year to come.

Goldman Raises Its Dividends in Fits and Starts 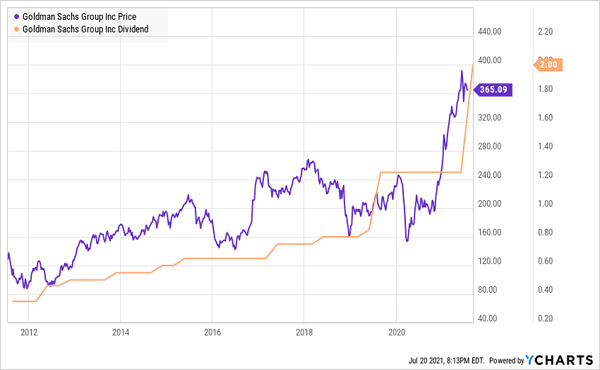 Not that anyone will complain about the investment bank’s latest chunky hike.

Goldman plans on improving its quarterly dividend by 60%, from $1.25 per share to a full two bucks. That represents a massive leap of 150% from its 80-cent payout at the start of 2019—doubly impressive given that GS kept its payout level for eight consecutive quarters in that time! Better still, Goldman has long maintained a well-funded dividend, so while the stock might only yield 2.2% even once the new dividend is announced and paid, it’s a more dependable distribution than many of its peers.

I’m also encouraged by Goldman’s second-quarter results, which blew past estimates and sent analysts scrambling to revise their 2021 profit targets. Shares are attractively priced, too, at a little more than 10 times next year’s earnings estimates.

But the investment bank making the biggest splash is Morgan Stanley (MS).

Morgan Stanley announced one of the most aggressive capital return plans after the Fed took off the COVID guard rails, announcing that it would buy back up to $12 billion of its stock between now and June 2022, and—more importantly—that it planned to double up its dividend, to 70 cents per share, effective the third quarter. That gives MS roughly 133% dividend growth over the past three years.

A Great Past Year for Morgan Stanley Shareholders 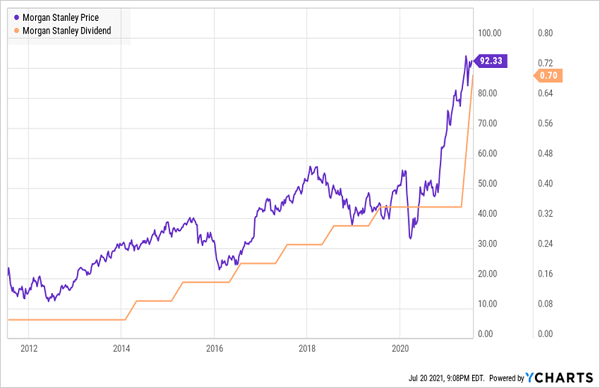 MS also easily passed the Fed’s 2021 stress tests, and its strong fundamentals include an estimated Tier 1 common equity ratio of 16.7%—a fine reading of the investment bank’s financial strength.

Morgan Stanley also belted out an impressive Q2 report, including earnings that were 19% higher than expectations. And despite a 35% run in 2021, shares trade at roughly 13 times this year’s estimates, which is lower than its historic valuation.

Rounding out the Big Six with a dividend doubler of its own is Wells Fargo (WFC), which is in desperate need of something to positively set it apart from its mega-bank peers.

Wells Fargo: How a 350% Return Can Disappoint 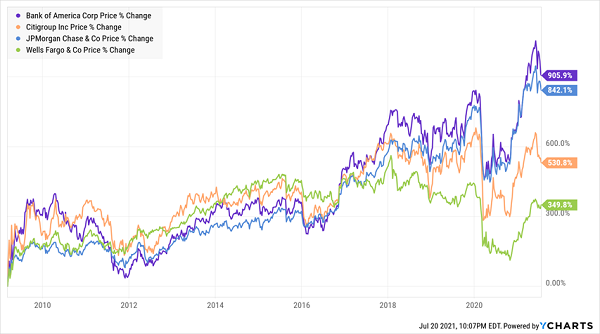 Wells Fargo announced a capital plan that includes $18 billion in share repurchases between 3Q21 and 2Q22. However, the real eye-opener was a jolt to WFC’s payout to 20 cents per share from 10 cents.

But Wells Fargo is tricky.

You see, roughly a year ago, Wells Fargo was paying 51 cents each and every quarter. But when COVID came around, it corrected hard, dropping its payout to a mere dime, while its contemporaries maintained their dividends. Handicapping Wells Fargo was an $1.95 trillion asset cap imposed by the Federal Reserve in the wake of its fraudulent-account scandal—and it’s a cap that could be around until 2022, at least.

If we take the optimistic view, that’s a load of upside potential for Wells Fargo’s dividend. Should it get out from underneath the asset cap, WFC could speed its return to a normalized dividend, which would be another 155% growth on top of the double it just announced.

However, that’s a pretty big if for Wells Fargo, which has shot itself in the foot time and time again over the past few years. We’re talking about a bank that has piled up enough scandals to take down not one, but two CEOs!

You can put this income-printing strategy to work today with a simple-to-manage, easy-to-understand group of just 7 specific tickers that can deliver a steady 15% every year—for life!

These seven stout income picks follow the exact same playbook as these banks, and they don’t need the Fed to sign off on every annual move.

Even better, they have one critical thing in common: They’re quietly handing smart investors growing income streams plus annual returns of 15%, 17%, 21% or more!

You can get the full breakdown on each of these 7 standout buys within seconds. Click here to get my complete research: names, tickers, dividend histories and a full breakdown of their operations—everything you need to buy with confidence.