Today we’re going to rank the longest-lasting dividends on the planet – five stocks that have written checks to shareholders for at least a century.

Dividends don’t get more secure than that.

Think about what the world was like in 1917. The United States was in the midst of World War I. Girl Scout cookies and Converse Chuck Taylor All-Stars were in their infancy. And the Dow Jones Industrial Average made several attempts on the 100 mark.

Since then, the United States has suffered 16 recessions and a pair of depressions, including the granddaddy of them all, the Great Depression of 1929-1933. The stock market has endured several crashes and bear markets, from the 1929 crash to Black Monday to the 2007-09 bear market and financial crisis.

It takes a company with significant adaptability to even survive so many downturns – not to mention changes in technology and consumer tastes – for a century or more, let alone pay out regular dividends to shareholders for so long. Thus, it’s a good bet that any company on this list has a safe dividend that will continue to withstand the test of time.

But that doesn’t mean they’re sound investments anymore. In some cases, the business has flatlined, and dividend growth has slowed to a glacial pace because high-payout ratios have simply put a cap on how much more the distribution can expand. That said, a few of these elderly stocks still are spry and can serve as useful additions to long-term portfolios.

Let’s look at a few members of the Century Club that have outlived their usefulness, and a couple that remain great sources of cash.

The company behind brands such as Cheerios, Pillsbury, Betty Crocker and Yoplait sports roots that go all the way back to 1856. The company started out as the Minneapolis Milling Company, and following a series of partnerships and mergers, the entity known as General Mills (GIS) formed in 1928.

The dividend predates the General Mills name, stretching back to the late 19th century, and it has grown for 13 consecutive years.

The bad news is that GIS has gotten stingy with its annual increases, doling out a mere 2% increase earlier this year to 49 cents per share. And while the yield is a respectable 3.6%, that’s more an effect of the stock’s double-digit decline in 2017.

When we reviewed General Mills earlier this year, the company had just put in its seventh consecutive quarter of year-over-year revenue declines. Since then, that streak has grown to nine quarters – that’s more than two years of decay. Its latest woes come from dwindling yogurt sales, which is especially troubling considering a growing disinterest nationwide for cereals – General Mills’ bread ‘n’ butter. 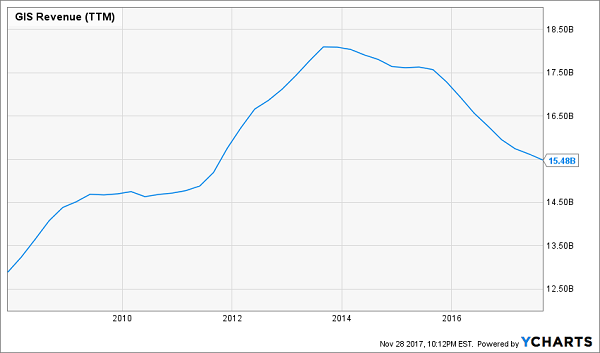 New York City-area utility Consolidated Edison (ED) certainly hasn’t acted like a company whose corporate history stretches back nearly two centuries. ConEd – which traces its lineage to the New York Gas Light Company, which was founded in 1823 – has climbed nearly 40% in the past three years to outstrip the S&P 500.

You absolutely should not expect those kinds of returns – which don’t even factor in the company’s dividend – going forward. That’s a brisk pace for any utility, but especially one with such a limited geographic area to work with.

Consolidated Edison benefits from the practically monopolistic business of a utility, which allows it to slowly but consistently tick up the rates it charges for energy generation over time, providing reliable if unremarkable growth over time. ConEd also has been working on itself, including a common-stock offering meant to help trim short-term debt and buy an interest in a gas pipeline, which is a play toward future growth.

Meanwhile, the company pays out just 66% of its profits in the form of dividends, which should allow it to easily keep upward pressure on its nice quarterly distribution.

I think Coca-Cola (KO) is one of the most dangerous dividend stocks on the planet.

Don’t get me wrong. I’m not predicting a sudden collapse in KO shares, nor do I believe moving trucks from Baltimore are coming to whisk away Coca-Cola’s dividend in the cover of night. No, Coca-Cola is so dangerous because it’s just “safe” enough to lure in unsuspecting investors, whose money will then be locked up in a perpetual slow bleed.

Said differently, Coca-Cola will keep your retirement nest egg from growing anywhere near as fast as it should.

Georgian pharmacist John Pemberton created the sweet concoction Coca-Cola in 1886, and by 1892, The Coca-Cola Company was formally incorporated. Dividends started flowing just a year later. Since then, the company has expanded its soda lineup to Diet Coke and Sprite, among others, but more importantly, it has diversified away from sugary sodas and into Powerade sports drinks, Dasani water and Simply Orange juices – an empire of more than 500 brands sold across more than 200 countries.

However, Coca-Cola’s growth has stagnated as an increasingly health-minded global population weens itself off “The Real Thing,” and revenues haven’t expanded since the first quarter of 2015. Dividend growth has dried up as well, to mid-single digits. Yes, Coca-Cola might persist in perpetuity, but where will the returns come from? The value proposition here looks all the worse considering KO trades at a lofty 44 times trailing earnings. 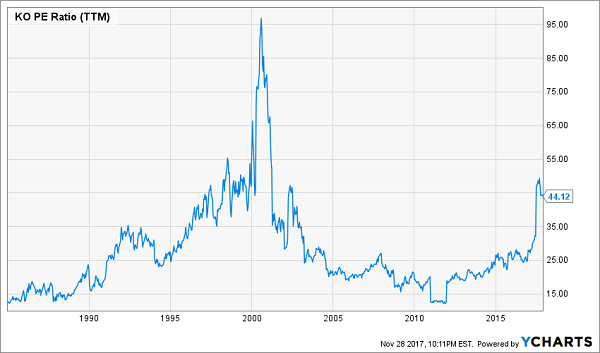 Eli Lilly (LLY) was founded in 1876 by a Civil War veteran of the same name, who also was a pharmaceutical chemist, and really got its name on the map in 1923, when it released Iletin – the first commercial insulin product sold in the U.S.

Today, Eli Lilly still is a major player in diabetes, with the company boasting products such as Glyxambi, Humalog and Jentadueto. It also has commercial treatments approved in the areas of oncology, immunology, neuroscience and cardiovascular health, among others.

One of the company’s most promising treatments is Trulicity, a type 2 diabetes medication that has exploded from $589 million in sales through the first three quarters of 2016 to $1.4 billion with a quarter to go in 2017. Eli Lilly also gained FDA approval this year for Verzenio, a treatment for advanced-stage breast cancer that Bernstein analysts believe could bring in $1.3 billion in annual sales by 2021.

Analysts see 20% profit growth this year followed by still-solid 10% top-line expansion in 2018. That could help Eli Lilly push to all-time highs above $100 set around the turn of the century, and should allow the pharmaceutical company to expand its nascent streak of dividend increases, which started in 2015 after six years of stagnation.

International Business Machines (IBM) has been pumping out payouts for just over a century, and the company is even just a few years away from Dividend Aristocracy, announcing its 22nd consecutive distribution increase in April of this year.

If only that were the 22 that mattered.

The 22 of greater (and iller) repute is the 22 consecutive quarters that IBM’s revenues have declined on a year-over-year basis. To put it differently, for more than five years now, IBM’s business has been in a period of shrinkage.

IBM is hardly doomed, of course – it generated nearly $12 billion in profits last year, and the company is on pace for a slightly better top line in 2017. And IBM is paying out less than half its profits in dividends, meaning the company likely will hit Dividend Aristocrat status without breaking a sweat.

But this blue chip has plenty of moles. Cash of $11.5 billion is nice, but not so nice when compared to its debt, which is about four times that size. While IBM’s strategic imperatives – newer businesses such as the cloud and security – are a growing slice of the pie, it’s still not overcoming the hemorrhaging of its legacy offerings. And Wedbush Securities’ Ian Winer thinks IBM’s earnings growth will be stunted, predicting no expansion in profits for the next few years.

Big Blue has myriad problems, and it’s attempting a comeback in one of the most difficult sectors for second-chance stories. That more than overshadows the longevity of IBM’s dividend.

If you want to stay out of the retirement poorhouse, you need to start expecting more out of your retirement holdings. Low yields will hold you back, doubly so if those stocks aren’t rapidly expanding their dividends year in and year out. Without that – not to mention actual business growth to fuel capital gains – you’ll never make it through retirement fully funded and worry-free.

This isn’t your typical batch of financial-pundit favorites like Coca-Cola and General Mills. Slow-growth blue chips with ho-hum yields have no place in this portfolio. Instead, you’re going to find these kinds of picks:

It’s hard out there. Some stocks might appear to have double-digit potential, but many of them are just yield traps whose payouts could collapse in a flash. And you simply can’t afford to gamble with your retirement.

The “12% for Life” portfolio isn’t a retirement bet, it’s a retirement plan. And it’s one that provides the best aspects of numerous investment strategies catnip – income, growth and even nest egg protection! This basket of seven conservative investments includes under-the-radar stocks that can return 12% annually, which is enough to double your portfolio in six years. It also is built to be more durable against market downturns like 2008-09, which ruined retirement for countless Americans.

The kicker: It provides three times more income than most retirement experts say you need!

You already know what you need in retirement. You need enough income to cover all your bills with enough left over for all of the extras that make the post-career life so sweet. And most importantly, you need to be able to continue growing your nest egg, which will act as insurance against life’s ugly surprises.

This portfolio will get you there. Click here and I’ll GIVE you three special reports that show you how to earn 12% for life. You’ll receive the names, tickers, buy prices and full analysis for seven stocks with wealth-building potential – completely FREE!