I don’t want to alarm you, but if you’ve got a lot of cash sitting on the sidelines right now, you’re about to miss out on a double-digit stock-market gain in the next 6 months.

In a moment, I’ll show you 5 funds you can buy today to lock in these quick, life-changing profits (and dividend payouts, too). To make it even easier for you, I’ve ranked these 5 popular buys from worst to first.

But first, let me tell you what I’m basing this bold prediction on. The story starts in early February of this year. 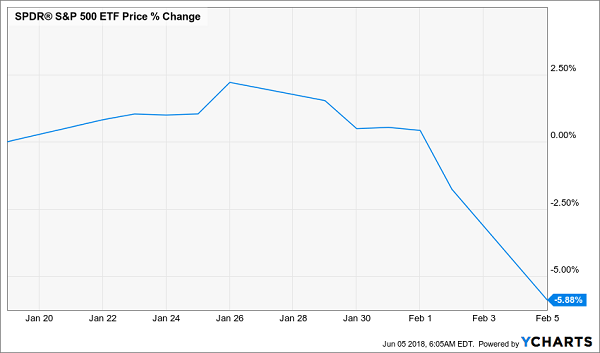 Panic was in the air—so much so that I was getting calls from worried family and friends asking me what was causing the selloff and what it meant for their retirements (I wrote about that in this article).

My response: “It means nothing.”

That’s also what I told readers—I explained how there was a bit of profit-taking and a much-needed break from the bull market we’d enjoyed for so long. And I also said that stocks would recover long before the end of 2018—a theme I wrote about again even as the market kept falling in February and again in March.

And now the market is doing this:

The Recovery Kicks In 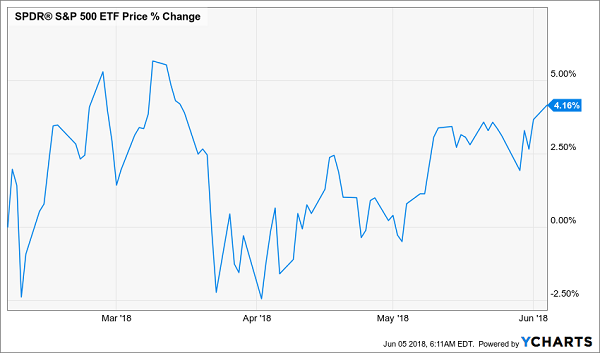 I don’t have a crystal ball—I have something better: data. A lot of it. And it’s telling me you need to act now if you want to grab your share of the profits from “stage 2” of the 2018 market boom.

Your Buy Window Is Closing Fast

Whether it’s corporate profits (which rose to a record high in the first quarter of 2018 and are set to rise again in Q2), falling unemployment (now at a shockingly low 3.8%) or wage growth (which is reaching 3%), the signs of a resurgent economy were all there in early February.

On top of that, the S&P 500’s forward P/E ratio was 17—lower than it’s been for most of the last 30 years, even though the index is now dominated by tech companies boasting higher P/E ratios.

All of that screamed “buy.”

Fast-forward to today, and the market has finally realized that, yes, the economy is strong, which means your window to buy into the recovery is closing fast.

But don’t worry: it’s not closed yet.

With continued economic strength lifting most US firms, there’s plenty of reason to expect stocks to end the year up at (or at least near) double digits.

So how do we get in before it’s too late?

5 Funds to Play the Rebound—Ranked From Worst to First

The obvious candidate (and worst of my 5 picks) would be an index fund. You can take your pick here, SPY or the Vanguard 500 ETF (VOO). Both will get you the same thing: market-matching performance and a pretty sad 1.8% dividend.

Next up is the Invesco QQQ Trust (QQQ), which gives you a growth burst through its exposure to the tech companies of the Nasdaq 100 index, including the big payment giant Visa (V), which is up a handsome 16.7% so far in 2018. QQQ is already up a nice 11.9% for 2018 after falling into negative territory in early February.

But you are sacrificing income to get that growth: the fund yields just 0.75% as I write.

A slightly better option is the iShares S&P 500 Growth ETF (IVW), which goes beyond tech stocks while focusing on companies that are seeing the biggest sales growth and dodging “old-economy” laggards like Xerox (XRX) and Time Warner (TWX). Its dividend, at 1.5%, is above that of QQQ but still behind the index funds.

I’m sure you’re seeing a theme here, and it’s a major downside with all 3 of these funds: if you want a meaningful income stream, you’ll have to supplement their meager dividends by selling your shares.

Trouble is, you’ll have to be very careful not to do so into a downturn. And that kind of market timing is beyond the reach of most mortals, which gives my top ETF pick a decided edge.

I’m talking about the iShares Core High Dividend ETF (HDV). Its 3.8% yield is far ahead of the payouts on the 3 funds I just showed you, and it also offers exposure to American large-cap firms boasting either a long history of growing dividends—such as Johnson & Johnson (JNJ) and Pfizer (PFE)—or big yields right now, like Verizon (VZ) and AT&T (T).

And since HDV still hasn’t recovered for 2018 (it’s down 5.6% year to date), it’s a great bet for the contrarian who sees a market-wide recovery in the future, as I do.

But I have to tell you something here: I still have one serious reservation about HDV: it’s just a little too focused on “old economy” stocks and underweight on the tech and biotech firms setting the pace for tomorrow’s economy.

And that could set the stage for a steady drip lower while the rest of the market races away.

Luckily, my No. 1 fund pick—which I’m going to tell you about now—doesn’t have that problem. It’s got all the tools to lead the market higher in the critical 6 months to come!

This off-the radar biotech champ has obliterated SPY in the last decade—and that’s just the start: 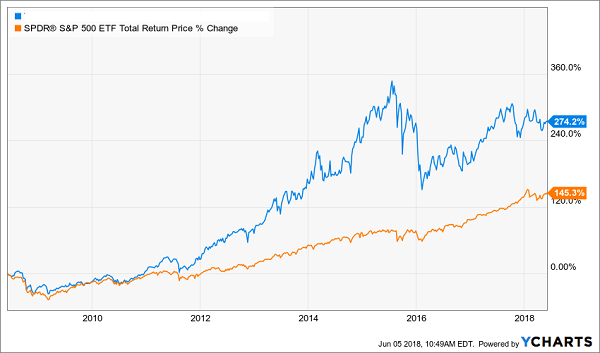 You see, because this chart includes dividends, most of this monstrous return was in CASH, so owners didn’t have to worry about selling shares into a crash (hello, 2008/09), like SPY holders did.

And those dividend payouts are still massive: this fund currently yields a mind-blowing 8.5%—nearly 5 TIMES as much as SPY. Oh, and it drops those fat cash payouts into your account monthly too!

I’m not done yet.

The secret behind this off-the-radar fund lies in its very structure: it’s a closed-end fund (CEF).

Don’t let the technical name fool you. All this really means is that this fund trades at a market price that’s different than the value of its underlying holdings.

And right now, that difference amounts to a 5% discount. This is basically free money!

To sum up, here’s what you’re getting in this 5% “markdown sale”:

I’ll give you all the details on this breakthrough income play when you click here.

And that’s still not all.

You see, this fund is part of a 5-fund “mini-portfolio” I crafted exclusively for members of my CEF Insider service. Now, for a limited time, I’ll show it to you at no cost. Taken together, these 5 totally ignored CEFs will hand you a safe 8.2% yield now.

And, thanks to their ridiculous discounts, my team and I have each one pegged for easy 20%+ price upside in the next 12 months.

Don’t miss out. CLICK HERE to get the names, ticker symbols, buy-under prices and my complete research on these 5 income (and growth!) plays now.