Buy at These Highs? No Thanks – 4 Cheap Dividends Instead

If you’re an income investor like me, these stock market all-time highs are pure misery. Fortunately, I have a fix, which I’ll explain in a moment.

Why reach for a 2% yield when you could lose that in an overnight trading session?

Cheap dividend stocks are a rare breed right now. But there are a few bargains left, and not because they are risky. These misunderstood shares are the last bastions of dividend value remaining on the board today.

Before we get to them, let’s consider data from financial data firm FactSet, which sites the price-to-earnings (P/E) ratio of the S&P 500 index at a sky-high 18.7 as we speak. If this doesn’t scare you, well, it should because it’s unusually high: 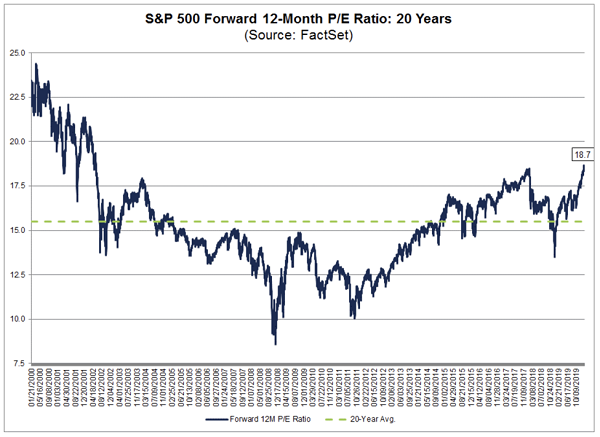 Bargains—true bargains, by the way, not just stocks that have been hammered for good reason—do exist. They’re just few and far between.

Here, I’ll show you four such bargains with plenty of yield to boot.

First up, a little credit where credit is due. Buckle (BKE) is a fashion retailer of mid- to higher-end clothes, accessories and footwear that operates nearly 450 stores in 42 states.

Like all brick-and-mortar fashion plays, BKE has suffered at the hands of both fickle consumer tastes and Amazon.com’s (AMZN) scythe. 2018’s revenues came in below where they were in 2019; same goes for the trailing 12 months through November.

Nonetheless, it has outperformed the market by about 4 percentage points since December 2018, when I warned investors about the company’s dividend. Its same-store sales have actually turned positive over the past year or so, and it has been better at managing inventory. That’s a problem you’ll often hear cited by the likes of JCPenney (JCP) and Gap (GPS). Not great company to keep.

Despite its run, BKE is quite cheap at 12 times earnings estimates, and it’s true yield is more than 8% when you consider it paid out a $1 special dividend last year.

But my warning still stands. Buckle earned $1.97 per share in fiscal 2019 but paid out $2 per share in dividends. It was worse in fiscal 2018, when it doled out $2.75 on net income of $1.86 per share. It actually raised its dividend recently to 30 cents per share, putting it on track to outstrip its earnings again with a similar special distribution.

Buckle is simply pouring profits into keeping shareholders happy, which is nice while it lasts—but consumer favor rarely does in fashion. Consider that the S&P 500 has rocketed ahead 281% over the past decade. BKE shares? Not even half that. 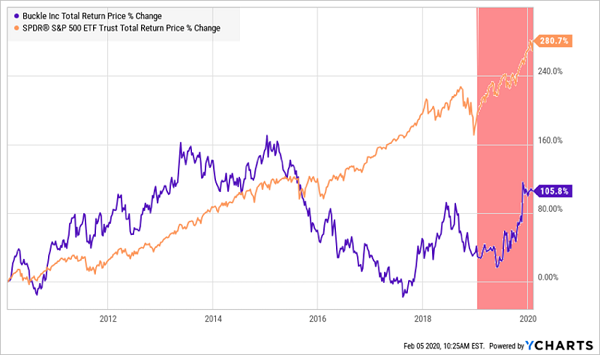 Like similar retailers, Buckle might occasionally be a winning swing trade, but it’s a poor retirement holding.

British American Tobacco (BTI) is doing a lot of things right, which you have to do to survive in this dwindling business, where health advocates and legislators alike have become increasingly aggressive and gained a clear upper hand.

It bought a competitor (Reynolds American) in 2017 to improve its scale. It has entered new product types, including vaping. It’s raising prices and reducing discounts where it can. It’s expanding its margins. Refreshingly, 2021 earnings estimates are showing growth over 2020, which is difficult to believe this late in the game in tobacco investing.

In fact, BTI is the best-performing major tobacco stock over the past year, hurdling Altria (MO) and Philip Morris (PM), and it’s the only one that’s eclipsing the market. Despite this, it still trades at 10.5 times forward-looking estimates and yields a spectacular 6%-plus.

But the wall British American Tobacco must climb only gets higher every year.

It’s actually the fact, over the past year, BTI shares are soundly topping the market. Tucked neatly into its more recent rosy reports are notes that volumes are declining, both at BTI and industry-wide. Vaping, one of tobacco’s next great hopes, faces mounting regulation, including the FDA’s ban of fruit- and mint-flavored products. At the end of last year, America raised the legal smoking age to 21—including vaping and e-cigarettes.

The cherry on top: the continued roll of ESG (environmental, social and governance) investing, which saw fund flows quadruple in 2019. That’s bad news for the likes of BTI because it’s money funding into products that explicitly avoid holding tobacco and other “sin stocks.” That means less institutional buying to prop the stock up. Let’s move on. 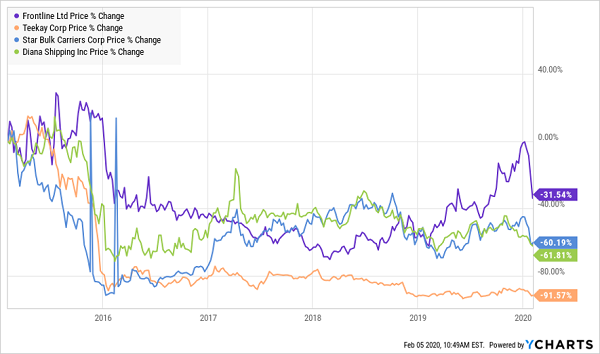 The world doesn’t run without shippers. Period. Most of the products you see around here either got here by boat, or were made with materials that got here by boat. But it’s a lousy business to be in. A whiff of global economic weakness can send these companies into the ground. So can fuel costs. So can simple lack of demand for any of the products they ship, even if the world’s economy is humming along.

Shipping containers, on the other hand, are not so bad.

Triton International (TRTN) is the world’s largest lessor of intermodal containers—the giant steel boxes you see on ships, trains and trucks. It boasts a fleet of more than 6 million TEUs (twenty-foot equivalent units) of containers; not just the dry steel boxes, but also refrigerated containers, flat racks for oversized cargo and tank containers.

This is a much more stable business, and thus TRTN has been a much more stable stock, in large part because of not just the worldwide need for Triton’s services, but the fact that those containers are used by numerous clients across several modes of transportation. And at the moment, you can buy that stability (and 5%-plus yield) for roughly 8 times estimates. That’s cheap.

But it’s not a bargain. While Triton doesn’t expose you to nauseating price swings, upside appears limited, too. Profit growth has been flat since 2017, and analysts don’t expect any changes in that through at least 2021. TRTN’s good-but-not-great income isn’t high enough to justify dealing with that lack of upside potential.

Navient (NAVI), a servicer and collector of student loans, is a clear example of why “first-level” investors get caught up in lousy investments, and how a research-based approach can spare you years of underperformance.

Navient is seemingly positioned in a fruitful industry. The firm has serviced $300 billion worth of loans across 10 million student loan customers across its 45 years of existence. And the cost of a college education, which has done nothing but spike over the past few decades, is expected to ramp up in a way that would make a stock-chart watcher swoon. 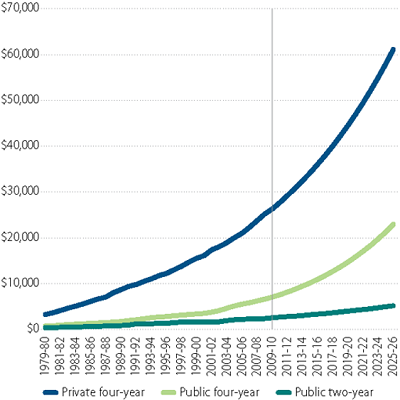 Then consider this: NAVI trades for a mere 4.5 times forward-looking estimates. Its PEG ratio, which combines value and growth estimates, is a skinflint 0.4 (anything under 1 is considered undervalued). And it only needs 25% of its profits to afford its 4.5% yielding dividend.

But here’s why you should steer away from Navient, and toward the five dividend winners I’ll tackle next. 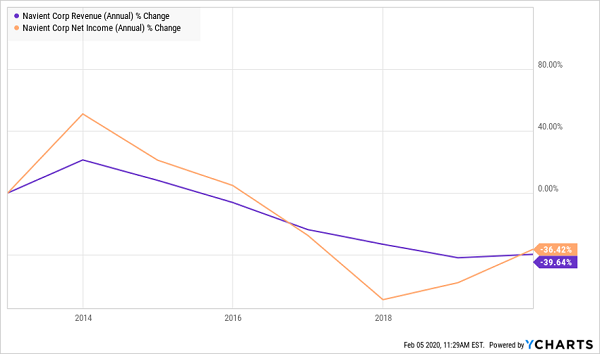 Navient was spun off from Sallie Mae in 2014 to handle federal student loans, and has had a dicey history from there. It has since faced multiple lawsuits, including from several states and the Consumer Financial Protection Bureau, and a Department of Education audit that said it might have pushed already struggling borrowers into even more expensive payoff plans.

In addition to the negative headlines, Navient’s business doesn’t quite reflect the boom in student education costs; its number of accounts and total dollar amount service shrank in 2019. Navient also faces a constantly changing environment of borrowers’ ability to actually pay off those loans – 30- and 90-day delinquencies both climbed in 2019 – as well as an unsure political environment that could upend the student loan industry.

If it weren’t for Navient’s dividend, shares would be in the red since the spinoff. The basic stats are stupendous, but it’s short on substance.

Every single one of these stocks boasts a few qualities, but a lot of asterisks.

Student loans are exploding, but …

Can they make a run? Yes. But when the bears finally dig their teeth into this ancient bull, investors will quickly remember those “buts” and dump those stocks the fastest.

Your retirement portfolio needs far more than just a high yield that could be slashed at the first sign of weakness. It needs a durable dividend, and an underlying business that will protect, and grow, your hard-earned nest egg, rain or shine.

But these five income wonders deliver two things that most blue-chip “pretenders” don’t even come close to providing:

What’s most important: That 7% to 15% price upside includes the possibility of a looming bear market. Stocks are priced for perfection, and we’re about to hit one of the most volatile election cycles of our lifetime. Stocks that can grow by double digits during a red-hot rally are a dime a dozen. But these “2008-proof” picks are among a small collection of companies that can deliver profits, while also smoothing out short-term price dips with big, fat yields of 8%.

And that’s just the average. One of these titans pays a SAFE 9.8%.

Just think about it. You buy this incredible stock now, and every single year, nearly 10% of your original buy boomerangs straight back to you in CASH.

That is the very definition of safety.

These five “2008-proof” wonders give you the best of both worlds: an 8% CASH dividend that jumps year in and year out, with your feet firmly planted on a share price that holds steady in a market inferno and floats higher when stocks go Zen.