Bond God’s Bond Warning: Should We Dump All Junk?

Brilliant bond manager Jeffrey Gundlach—aka the “bond god”—has decreed that it’s time to sell “junk” bonds. And he’s gone as far as to say that one-third of corporate bonds should probably be rated as junk.

Gundlach is one of the few “gurus” that we pay attention to. He called the subprime mortgage crisis ahead of time in 2007, an epic rally in US Treasuries earlier this decade, and President Trump’s election in early 2016 (when few gave the Republican candidate a chance.)

And his two closed-end funds (CEFs) are excellent long-term additions to a retirement portfolio. Over the last six years his two DoubleLine funds have roared to 72% and 54% total returns (with the majority of these gains coming as cash dividends:) 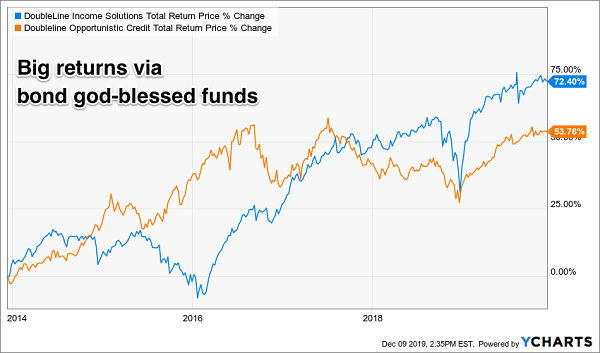 But no guru is perfectly clairvoyant! If Gundlach’s recent warnings sound familiar, it’s because he issued similar warnings on January 9. If you’d flipped his excellent funds for cash, and stuffed it under your mattress at that moment, you’d have missed out on 16% and 13% total returns over the last 11 months:

The Cost of Excessive Caution 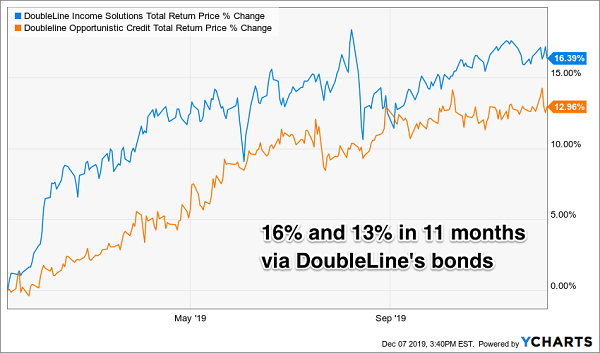 The tricky thing about the bond market is that it often appears to be sending some type of warning signal. But false positives are plentiful, and even legitimate sell signs often trigger too late.

For example, let’s consider current credit spreads between low-rated (CCC) and middling-rated (BB) bonds. The higher the difference, or “spread,” in yields between these buckets usually means that the low-rated credits are doing worse. Which, in theory, is bearish for the stock market (as the bond market has a reputation for being “smarter than stocks” by signaling credit risk ahead of economic problems).

Whether or not this is actually true is doubtful. Our quant friends at SentimenTrader point out that this is the fourth time in the past 25 years that credit spreads have hit “extreme” levels. With the bursting internet bubble and 2008 financial crisis being two of the last three data points, this sure seems ominous: 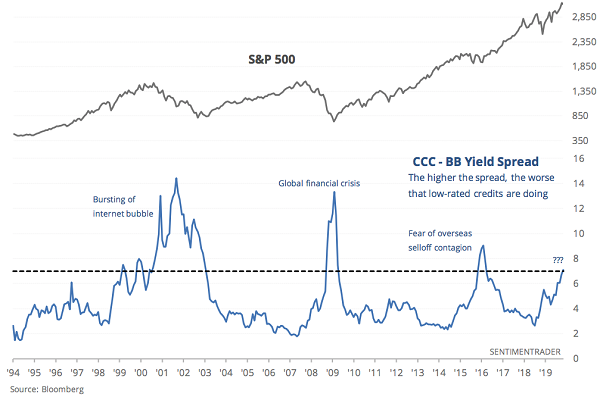 However, the ensuing one-year return for the S&P 500 was positive in all three cases with an average return of 10.3%!

The 2015 fears never panned out. Meanwhile the 1999 signal preceded the eventual slide by two years, while the 2008 warning flashed after most of the losses had already happened.

Of course, a sample size of three is too small for us to draw any conclusions from. But most pundits you read online and hear on TV use zero data points to make their own claims! We calculated contrarians have at least considered the (limited) data before determining the relative insignificance of current worries.

Does this mean we turn a deaf ear towards Gundlach’s warnings? Not exactly. We are always investing carefully and thoughtfully, thanks to these three bond retirement rules.

First, we buy CEFs rather than ETFs because they are better long-term vehicles. Let’s take that six-year chart and add in the two most popular bond ETFs. The SPDR Bloomberg Barclays High Yield Bond ETF (JNK) and iShares iBoxx High Yield Corporate Bond ETF (HYG) have run 10X as much money as the DoubleLine funds, but they barely return half as much! 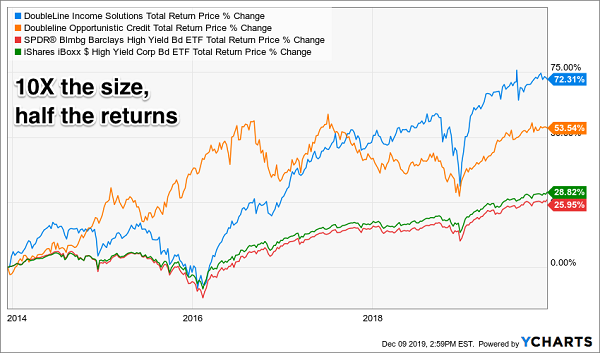 Another (huge) advantage that we CEF investors have over ETF fanboys is that we can wait until our funds trade at discounts to their net asset values (NAVs). For example, when we added DoubleLine’s Income Solutions Fund (DSL) to our Contrarian Income Report portfolio in April 2016, the fund was trading at an 8% discount to its NAV.

In other words, we bought the fund’s holdings for just 92 cents on the dollar. As the discount window closed (and even flipped to a premium), we enjoyed price appreciation that contributed to our 63% total returns to date on DSL:

A Great Fund at 92 Cents on the Dollar 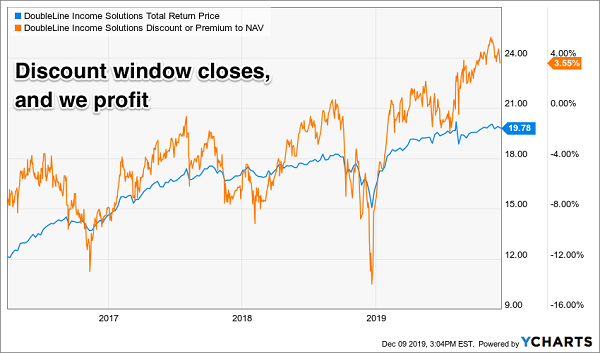 And finally, we pay more attention to our CEF’s NAVs (which are harder to locate, but more meaningful) than their prices (which are probably too easy to find, and meaningless day-to-day.) We want to buy bonds that are going to hold their value or, better yet, appreciate in value. (Higher NAVs can be a source of gains for us, too.)

Back to the bond god, who (to his credit) has told investors that his more-conservative DoubleLine Opportunistic Credit Fund (DBL) would likely outperform his more-aggressive DSL fund during challenging credit times. Is it time to trade in DSL for DBL?

I (fortunately) didn’t recommend doing so in January, and I’m recommending that we continue to hold DSL now. However, I wouldn’t add new money at these prices, either. With the fund now trading at a modest premium to its portfolio, we’ve got better big dividends to buy to make right now.

And like DSL, they pay big monthly dividends to boot!

But it’s only a matter of time before our buy window on DSL slides open again—and we can put more cash into this amazing 9.1%-yielder.

When you take a no-risk trial to Contrarian Income Report—full details on that and my complete monthly-dividend strategy here—you’ll be the first to know when the time is right.

Meantime, if you’re looking for some stout monthly high yielders to buy NOW, fear not! I’ve got you covered there, too.

Those would be the stocks, high-yield REITs and CEFs in my powerful “8% Monthly Payer Portfolio.” With just $500K invested, this dynamic collection of investments will hand you a rock-solid $40,000-a-year income stream. That’s easily enough for most folks to retire on.

The best part is you won’t have to go back to “lumpy” quarterly payouts to do it. Thanks to this breakthrough portfolio’s reliable monthly dividends, you can look forward to the steady drip of $3,333 in income, month in and month out—on your $500K, give or take a couple hundred bucks!

Full details on these stalwart income plays are waiting for you right here. You’ll discover:

Don’t miss your chance to start tapping this retirement-changing dividend stream while you can still get in at a bargain. Click here to get full details on every stock in my “8% Monthly Dividend Portfolio”: names, ticker, symbols, buy-up-to prices—everything you need to know to buy with confidence.