Worried that a bursting bitcoin bubble will sideswipe stocks in 2018?

Don’t be. Because as I’ll explain in a moment, the hysteria over the so-called “cryptocurrency” is actually good for stocks this year, no matter if bitcoin explodes for a 10,000% gain … or flames out and crashes back to earth.

I’ll also show you the one surprising group of stocks poised to benefit from bitcoin in 2018, no matter what happens.

First, if you’re like most people and find bitcoin a complete mystery, stick with me for a minute and I’ll show you how it works—and what’s pumping up the bulging bitcoin bubble.

I first heard about bitcoin in 2013. At the time, I thought it was interesting technology—but not an investment.

Bitcoin simply decentralizes a ledger. Instead of having a central authority, such as the accounting office at a bank, settle all accounts and make sure money goes to the people it’s supposed to, that’s all done on a decentralized ledger that’s distributed among every bitcoin in existence.

That’s where the term “blockchain” comes from: each transaction is a “block” that is “chained” together on that massive, decentralized leger.

The biggest benefit? Bitcoin provides an anonymous transfer of money. Theoretically, the ID of every bitcoin is not tied to a particular person, which makes it the perfect currency for transmitting money privately.

The truth is, bitcoin is actually the least private currency in existence! That’s because you can look up every transaction on that very public ledger. And since all the major cryptocurrency exchanges must get proof of identification from people before they buy a bitcoin, the currency’s anonymity is now a mirage.

Oh, and there are other problems, too—like the eternity (78 minutes!) it takes to transfer money with bitcoin, versus just a few milliseconds with PayPal. And bitcoin is getting slower as it gets more popular.

Other bitcoin glitches have shown up, too, but none have stopped bitcoin’s surge—it’s up 1,350% in the last year!

Meantime, the cryptocurrency mania gets more and more outrageous.

Longfin Corp. (LNFN) recently announced it was buying a lending platform that only transacts in cryptocurrencies—and LNFN soared 1,000% in a single day. Even more ridiculously, a company that sells bottled iced tea just announced it’s rebranding to “Long Blockchain Corporation” … and its stock surged 500% in minutes!

I’d be beating a dead horse if I said this is a bubble. But the truth is, the whole debate over whether there’s a bitcoin bubble or not is a total red herring.

The real point is that this bitcoin bubble is very good for stocks—and it’s one reason why I think buying US stocks—including through high-yield closed-end funds (CEFs) like the 5 I reveal here—is what you must do for 2018.

And that goes double for a sector that may surprise you: technology.

What Everyone Gets Wrong About Bitcoin and Tech Stocks

If you remember the dot-com bubble, you know how it played out. It started with a slow realization that we were looking at a new, earth-shattering technology. Then there were waves of new companies with new ideas—some good, most bad.

Then the “dumb” money flowed into the bad ideas, which encouraged people to bring even worse ideas to market in a bid to get rich quick. Then it all exploded in 2000–01.

The same story is playing out in bitcoin—but with a difference: it is not happening in tech.

Consider this: while FAANG stocks—Facebook (FB), Amazon (AMZN), Apple (AAPL), Netflix (NFLX) and Google (GOOGL)—have surged in 2017, as we enter 2018, they’re actually cheaper than they were a year ago.

I know that may sound crazy, but it’s a perfect example of why we need to look beyond price-to-earnings (P/E) ratios when valuing stocks and examine price-to-earnings-growth (P/EG), which, as the name implies, takes a company’s increased profits into account.

When we do that, we see that the FAANG stocks have gotten 34% cheaper, while the S&P 500 is slightly more expensive: 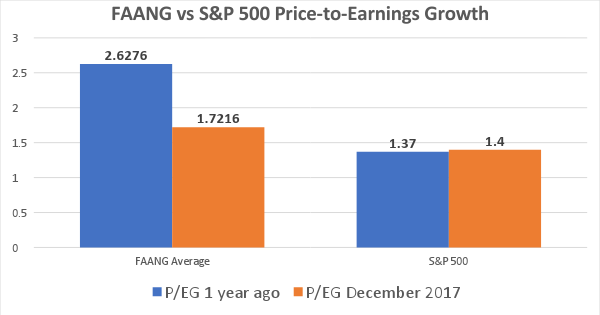 While tech stocks are admittedly pricier than S&P 500 stocks from an earnings-growth perspective, they’re a lot less expensive than they were a year ago—and Facebook and Netflix are actually cheaper than the S&P 500.

Which brings me to my favorite way to get tech stock exposure in 2018 and beyond: through a high-yielding CEF like the BlackRock Science and Technology Fund (BST), which I spotlighted in a December 28 article. BST gives you FAANG exposure with a happy twist: instead of the low—or no—dividends these stocks pay individually, you get a nice 5.9% payout with this fund.

Finally, even if you look at FAANG stocks from a P/E ratio perspective, we haven’t seen wild valuations in the last year—in fact, if you ignore Amazon, P/E ratios actually went down for FAANG in 2017:

Big-Name Techs: Cheaper Than You Think 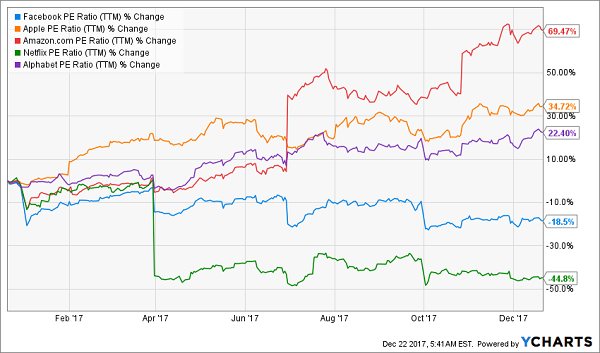 So what does all this have to do with bitcoin?

Simple: instead of the “get rich quick” dumb money jumping into tech stocks and driving them skyward, we’re seeing that money stay in the obscure cryptocurrency market. Which means the pressure from overheated, panicky investors isn’t in tech stocks at all. When you look at the S&P 500’s modest 1.4 P/EG, it’s clear that the cryptocurrency mania isn’t affecting the broader market, either.

Even the companies that are supposed to benefit from bitcoin most directly aren’t getting a flood of greedy investors’ cash. Just compare Advanced Micro Devices (AMD) and NVIDIA (NVDA) to the price of bitcoin in 2017:

Bitcoin Vs. the Stocks Drive It 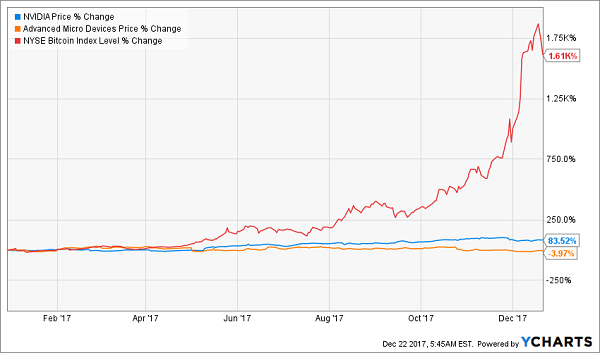 It’s clear the bitcoin bubble isn’t bleeding into the companies that are best positioned to profit from its popularity (AMD and NVDA produce the chips necessary to mine bitcoin).

The bottom line? With the frothing-at-the-mouth money all staying in the bitcoin sandbox, us adults in the real investment world can relax. Because if the bitcoin bubble pops in 2018 or sometime later, we don’t need to fret that it’s going to hit our favorite stocks.

I don’t know why you’d mess around with a risky gamble like bitcoin when you can start 2018 off the right way—by grabbing a safe investment throwing off a sturdy 10.4% dividend yield today.

Think about that: on, say, a $100,000 buy, you’re getting $10,400 in cold, hard cash here, straight out of the gate! This is literally cash in hand we can count on in 2018 without the sickening ups and downs of a “Russian roulette” play like bitcoin!

It gets better, because this rock-solid CEF—one of my top 4 CEF picks for 2018—has 20% price upside all but baked in this year.

Why do I say that?

For one, it’s a screaming bargain at a 5.3% discount to net asset value (NAV, or what its underlying portfolio is worth). That means you’re buying every dollar of this fund for just $0.95! And your upside is even bigger when you realize that this one usually trades for 2% more than it’s actually worth.

That’s just the start, though.

Because this fund’s management has an eye for bargains unlike any I’ve ever seen: the stock portfolio they’ve painstakingly assembled boasts an average P/E ratio of 17.5 now—way lower than the S&P 500’s 25!

Add it all up, and we’re lined up for EASY 20% price gains here. And we’ll be collecting that blockbuster 10.4% income stream while we watch our initial investment grind higher!

I’ll show you the name, ticker and everything I have on this incredible fund when you CLICK HERE.

But even that’s not all! Because I’ll also reveal the names of my 3 other top CEFs for 2018, too.

Add these 4 powerhouse funds together and you get an “instant” portfolio that keeps your nest egg safe by spreading it across just about every asset class you can think of: US stocks, foreign stocks, bonds, real estate and more.

PLUS, these 4 income powerhouses combine to hand you a sturdy—and GROWING—8.1% average dividend yield, along with easy 20%+ upside in 2018.

These are my 4 very best buys for 2018—bar none. And I’m ready to share all my research on them with you absolutely FREE. CLICK HERE to get the names, tickers and everything you need to know about these 4 amazing funds now.