We contrarian dividend buyers love it when an insider loads up on their own (ideally washed out!) stock. Especially when that stock is:

We’re seeing all three of the above with cell-tower REIT Crown Castle International (CCI), which has been knocked down some 37% in this selloff. That’s driven its yield up to 4.4%—just a shade below all-time highs!

A Megatrend Stock With a Mega-Yield 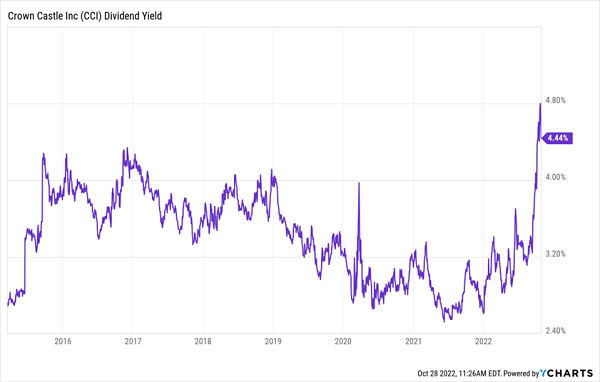 The insider? One Matthew Thornton III, a member of Crown Castle’s board who has a lot of skin in the game. Just last week, Matthew dropped $150,397 of his own cash into the stock. In all, he’s sitting on some 5,271 shares, good for about $730K at today’s prices.

(Big thanks to our friend J.C. Parets at All-Star Charts for tipping us off to this one!)

Insider buys like these are bullish indicators because unlike the professional (and often wrong!) pontificators in the media, insiders know what makes their companies tick—and they also know if something’s coming down the pike that could ignite the share price.

That makes buying alongside these folks the best way to have to front-run a surge in the stock—and it’s perfectly legal!

You no doubt know the famous Peter Lynch quote on insider buying: “Insiders might sell their shares for any number of reasons, but they only buy for one: they think the price will rise.” I can almost see you nodding along with that one. Well, it’s absolutely correct. And there are lots of reasons to consider buying Crown Castle these days.

Crown Castle is one of the Big 3 US cell-tower operators—American Tower (AMT) and SBA Communications (SBAC) being the other two.

The company owns 40,000 cell towers, 85,000 miles of fiber-optic cable in the US and 115,000 “small cells.” Those tiny transmitters are a major growth area, as they help Crown Castle handle rising mobile-data traffic in urban areas without building new towers.

The end result is a higher return on investment on these small cells than Crown Castle can squeeze out of its full-size towers. 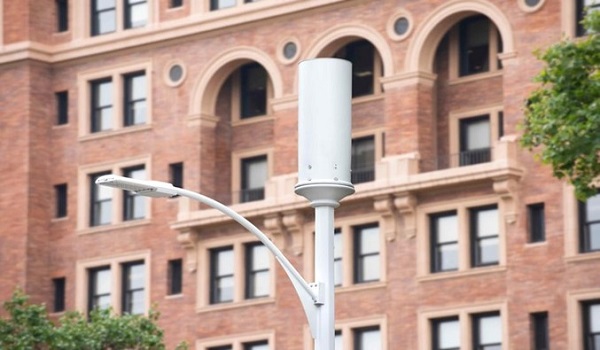 This year alone, the company plans to deploy some 10,000 small cells, and the continuing expansion of 5G will help support that growth.

Let’s stop and talk about 5G for a minute, because at this point you’re likely tired of hearing about it. And it is true that the US carriers are well into their buildouts, which is resulting in lower capital expenses. Verizon, for instance, has spent about $15.8 billion on capex this year, almost all of the $16.5 billion to $17.5 billion it plans to spend in all of 2023.

That sounds like a negative for Crown Castle, but what everyone is forgetting is that the maturing of 5G is already priced into the stock: as I said the company has shed 39% of its value this year, more than real estate investment trusts (REITs) as a whole, tech stocks and the S&P 500.

That’s way overdone for a company that boosted site-rental revenue by some 8% last quarter and dropped a 6.5% dividend hike on members earlier this year. That’s a bit lower than it has been in recent years, but CCI is still kicking out a 9% compound annual growth rate on the payout in the seven years ending on December 31, 2023: 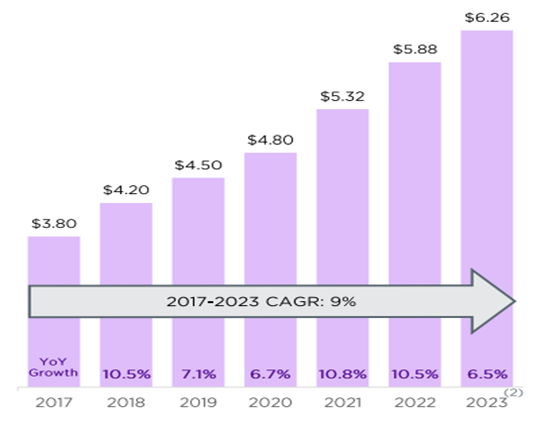 Remember, too, that you’d be buying at a 4.4% yield, far more than investors who bought just a few months ago are getting. That “head start” makes a big difference to the yield you’d collect on your original buy as your payout grows in the long run.

The other reason why this selloff in Crown Castle is overdone is because, as with all tech(ish) names, folks are worried about the effect rising rates will have on the company’s borrowing costs.

This fear is completely misplaced, for a couple of reasons.

First, we’re likely near the end of the rate-hike cycle. The latest signal came from, of all places, the Bank of Canada: our neighbo(u)r’s central bank announced a 50-basis-point hike last week, lower than its expected 75 basis points. Many economists expect its rate-hike cycle to wind up in December.

Canada’s economy has a lot in common with ours, so you can bet Jay Powell took note. And if we do get a recession next year, rate cuts are likely in the cards (as they’ve been for every recession in the history of the Fed). That, in turn, would lower Crown Castle’s borrowing costs while its largely recession-proof business churns ahead.

In other words, the peak of the rate-hike cycle and just ahead of a potential recession is likely a great buy window on the stock—and you can bet our man Matthew knows it.

One more thing on the debt front: Crown Castle’s long-term debt of $21.5 billion is 39% of its market cap, or its value as a public company, which is very reasonable for a REIT with steadily rising rental income like Crown Castle. (And remember, this low ratio is after the 37% drubbing the company’s market value took this year.)

Plus, 84% of Crown Castle’s debt is set at a fixed rate, and its weighted average coupon is just 3.2%, down from 3.8% seven years ago. And little of it is maturing in the next few years:

Matthew Knows When Crown Castle Is Cheap (and so Do We)

Finally, the company’s dividend accounts for 82% of FFO, which is manageable for a REIT with stable cash flow. And if you weren’t convinced Crown Castle’s 39% fall made it a bargain, consider also that it trades at just 16.7-times forecast 2023 FFO, another fact that Matthew likely knows well.

The bottom line here is that megatrend dividend growers like these don’t go on sale often. And when we have key insiders making big buys, it’s worth paying close attention.

Yours Now: My Top 7 Picks for Big Gains (and Dividend Hikes) in ’23

When corporate insiders start putting their own cash into their companies, we contrarian dividend buyers take note. And when they make other shareholder-friendly moves, like buying back their own shares and hiking their dividends, they really have our attention!

Think about it for a moment: this is precisely why the yield on your favorite dividend stock stays roughly the same, even after a big payout hike—investors see that hike and bid the stock up, and the yield back down.

You can still buy these stocks NOW at a bargain, but there’s not much time left. Don’t miss out. Click here and I’ll share the names of these 7 cash-rich dividend growers with you an in exclusive Special Report.