A Stock Dividend Portfolio with a P/E Under 9, Yield Nearly 7%

What if I told you that, in a market this expensive, there are nine dividend stocks with price-to-earnings (P/E) ratios under nine?

And that this low P/E ratio paid 6.9% per year in dividends?!

We’re unlikely to see these hidden gems touted on mainstream financial websites. With the S&P 500 in the stratosphere, these ground-level bargains are being overlooked. But we contrarians see these dirt-cheap dividend stocks that:

Let’s start with LyondellBasell (LYB, 5.1% yield), a Dutch-headquartered multinational chemical firm that is both the top producer of polypropylenes and the largest licensor of polyolefins, both of which have a wide range of uses, from consumer packaging to automobile parts.

LYB has underperformed the market in 2021, trading virtually flat versus a nearly 25% return for the S&P 500. And that has kept it dirt-cheap, at just 5.5 times earnings estimates.

We should concede that Lyondell is “cheap for a reason.” Namely, the company is expecting a big operational pullback in 2022: a 4.4% decline in revenues and a nearly 19% decline in earnings thanks to soaring input costs.

Tax-prep services firm H&R Block (HRB, 4.4% yield) might be running into headwinds, too. The stock outperformed the market as stimulus and other COVID measures ushered in a bevy of new tax headaches. That put a jolt into the entire tax-prep industry for a year—now, though, H&R faces the challenge of retaining those customers. It’s forward P/E of 9 may take this into account.

Strategic Education (STRA, 4.2% yield) and Western Union (WU, 5.7% yield) find themselves in the bargain bin as their business models are challenged.

Take Western Union, which at a forward P/E of 7.7 is certainly attractive from a valuation standpoint. So too is a nearly 6% yield. But the stock is sagging under the weight of transformational changes in its industry—both traditional electronic-payments firms, as well as the rise of cryptocurrencies.

Meanwhile, Strategic Education—the product of 2018’s merger of for-profit educators Strayer and Capella Education—is a longtime underperformer that faces the prospects of a quickly evolving educational landscape that’s challenging even the most hallowed traditional institutions. Its cheap 13.8 forward P/E reflects these difficulties, as well as expectations for an operational step back next year.

2 Secular Sob Stories That Are Merely Cheap, Not Values 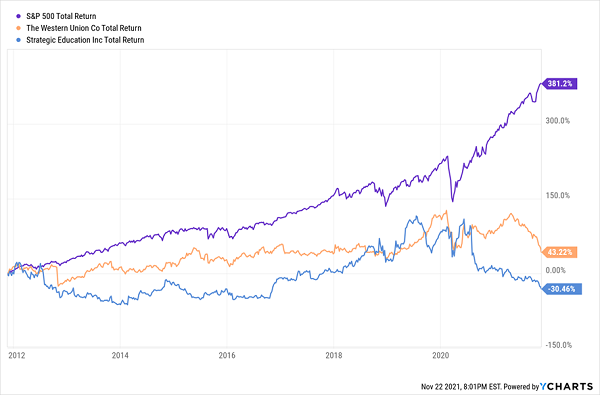 More attractive is Chevron (CVX, 4.8% yield), which is trading at 11 times earnings estimates. Rising oil and gas prices aren’t an automatic win for integrated major Chevron, where the benefits to its E&P division are somewhat offset by higher input costs for its vast refining operations. Still, the confluence of better energy prices and rebounding demand for its refined products is ultimately good for CVX prices.

And it’s hard not to love Chevron’s craftiness and resilience. Even while it was conserving cash during the COVID energy crisis, it bought Noble Energy in a $5 billion all-stock deal. It also managed to keep growing its dividend and recently revived its share-repurchase program.

One area with several attractive values is the insurance industry, where rising rates benefit insurers looking to invest policyholder premiums in lower-risk assets.

I recently extolled the virtues of Prudential Financial (PRU, 4.3% yield), whose businesses include individual life and group insurance, annuities, retirement-related services and investment management, among others.

“Management knows a great deal when it sees one—it’s repurchased 10% of PRU’s stock in the last five years,” I said. And Prudential is getting a deal on its own shares now, at 9 times earnings estimates.

It’s not the only attractive insurer, however. Unum Group (UNM, 4.8% yield) is tops in disability insurance in both the U.S. and the U.K. Other offered products include life, critical illness and accident insurance. And Wall Street appears to be sleeping on its growth prospects—despite estimates for a 16% profit bump in 2022, UNM trades at a thin 5.5 times earnings estimates.

Another insurer worth watching is Old Republic International (ORI, 3.5%)—an old-guard general- and title-insurance provider whose headline yield belies a much more potent income producer. Consider my recent look at ORI:

“Where ORI’s payout transcends from ‘good’ to ‘great’ is its fairly consistent special dividends. Old Republic utilizes a two-part dividend system that sees the insurer pay out a regular dole, as well as annual special payouts based on its profits for the year.”

To wit, its 22-cent dividend—which, by the way, has grown for a whopping 40 consecutive years to make it a mid-cap Aristocrat—is good for just a mere 3.5% yield, which is outside our 4% screen. Tack on the $1.50-per-share special cash dividend announced in September, however, and you’re looking at a mouth-watering 9.2% yield!

Sweetening the pot is a 9.5 forward P/E.

Speaking of special dividends, let’s give OneMain Holdings (OMF, 5.7% yield) a second look. The company, which operates under the OneMain Financial, provides personal installment loans to about 2.2 million customers, many with non-prime credit scores.

This is an admittedly cyclical business, but one that grew like a weed during COVID. And that has fueled a slew of massive dividends. Rather than pay out separate special dividends, OMF sets a “floor” for the quarterly dividend, then pays at least that, or possibly more. In late 2020, OMF set a floor of 40 cents per share for its dividend. This year, it paid out a dividend of $3.95 per share, then 70 cents per share (setting a new floor in the process), then $4.20 per share, and another 70 cents. That $9.55 per share of income translates to a 19.2% total yield at current prices!

Those Dividends Make a BIG Difference 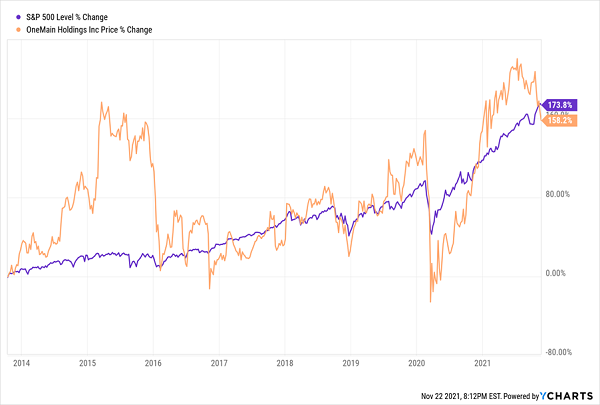 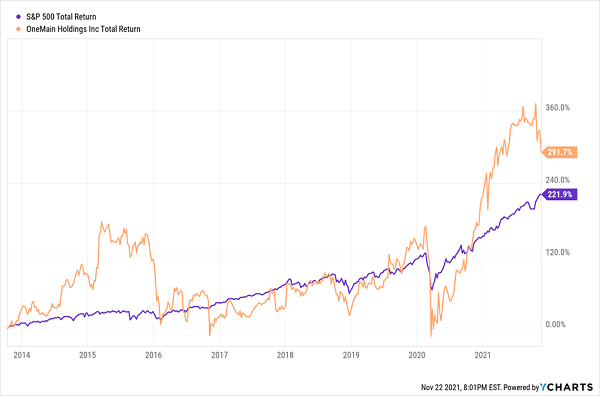 And we’re getting that yield for just 5.5 times estimates.

Make 15% Every Year—Even During Recessions!

But for any number of reasons—inconsistent payouts, slow growth prospects, even existential questions—I don’t love them.

I’ve reserved that level of excitement for a small group of seven dividend growth plays that are due to double. That’s because they ace the so-called “shareholder trifecta,” where a stock pays us in three different ways:

These Hidden Yields stocks can provide us with a recession-proof retirement. They can even make us as rich as we’d hoped to be in our younger days!

These seven dividends are poised to double over the next few years. As these payouts pop, the share prices will follow higher. So, the best time to buy them is right now—before they soar, not after!

Bull or bear, I don’t care. These seven recession-proof dividend stocks are primed to deliver 15% returns per year, every year.