A Shocking Market Crash; Here’s What to Do

If you noticed American stocks selling off last week and you’re confused as to why, it’s because of an obscure corner of financial markets that might become one of the biggest stories of 2018: the Turkish lira. 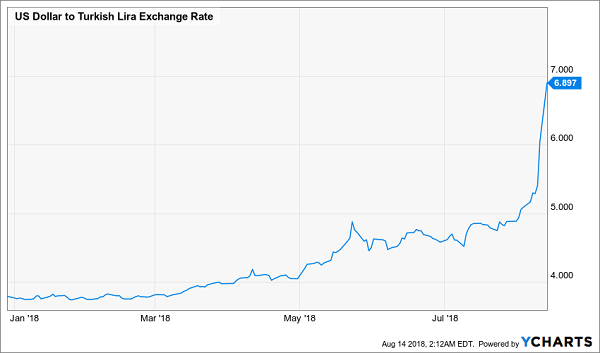 Where a dollar would get you less than four lira at the start of the year, it now gets you more than six lira—in other words, Turkey’s currency has lost nearly half of its value in 2018 alone!

This is something some investors need to fear a lot. And today I’m going to show you how to avoid being on the losing end of this crisis (including 11 funds you need to sell or avoid now, before they get crushed).

But first, let’s dig into what exactly is happening in the eastern Mediterranean.

These kinds of moves in emerging market currencies aren’t all that unusual, but Turkey’s a special case.

Hardly a distant frontier, the country’s location, between the Middle East and Europe, makes it a key cultural and economic bridge. And Turkey’s economy has benefited; with a $10,800 USD per capita annual income (before the currency crisis), Turkey’s citizens were more prosperous than those of Russia, Mexico or even China—and its economy had been growing at a healthy rate since 2009.

But that’s changed, for a few reasons, including that Turkey’s central bank is not as autonomous as it should be or used to be, resulting in a mismanaged economy that’s turning from weakening growth to a potential mess of hyperinflation, along with slashed purchasing power for its citizens.

At this point, analysts broadly agree that the question of “if” Turkey faces a recession or depression has become a question of “when.” And that’s not good for a lot of banks.

Turkey’s economy is small, so the odds of its crisis spreading to the rest of the world are low. But Turkey has received a lot of credit from yield-starved European banks—and that makes Europe’s financial sector dangerous now.

Of course, the market knew this was going to happen long ago, which is why shares of Europe’s biggest banks are in the toilet.

Europe’s Banking Sector Is in Freefall 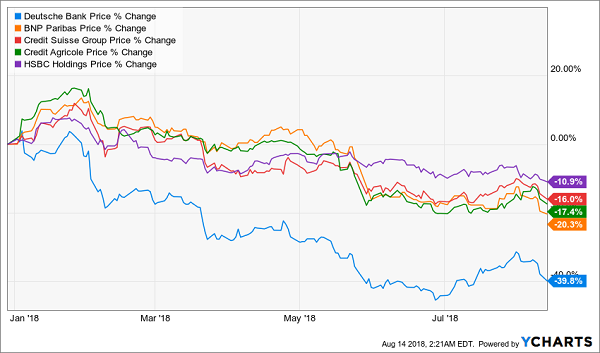 If Europe’s banks keep falling, this could result in less credit being available for European companies, which could stunt growth. There’s also a risk of European banks facing a panic that could spread to the continent’s economy as a whole. Americans should be cautious.

Conclusion: Avoid European banks and, just to be safe, European anything.

The Tide Turns on Emerging Markets

The Turkish situation is adding to emerging markets’ woes, too, and making 2018 a huge contrast to what we saw from these countries last year.

After years of lagging, foreign stocks, bonds, currencies and funds soared in 2017. Take, for instance, the BlackRock Enhanced Global Dividend Trust (BOE), one of my favorite picks last year: 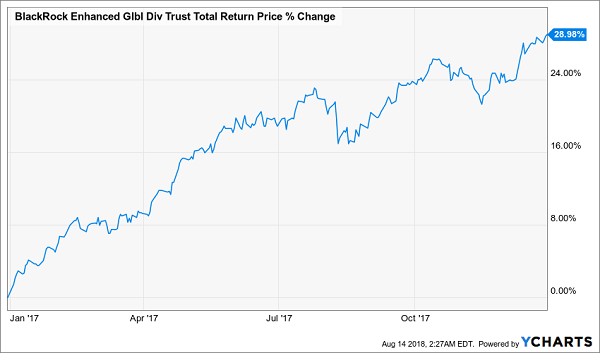 This fund’s net asset value (NAV) grew so much that it paid out a $1.43 special dividend at the end of 2017, bringing its annualized yield to an eye-watering 18.3% for anyone who bought at the start of the year!

But all good things must end, and BOE has struggled due to a stronger dollar in recent months. As a result, it cut its dividend in July and may have to cut its payout again.

This isn’t a problem with just BOE—all global funds, whether they focus on bonds or stocks, have fallen in 2018, and those focused on emerging markets are doing even worse.

Take, for instance, one of the best emerging-market funds, the Templeton Emerging Markets Income Fund (TEI), which has a strong record of outperformance. In the last few days, its value has plummeted: 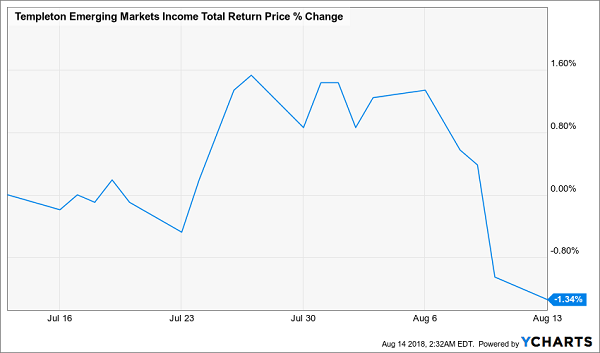 Keep in mind that Turkey is a small portion of TEI’s portfolio, but that doesn’t matter. Totally unrelated currencies, like the Mexican peso, are losing value against the dollar alongside the Turkish lira. 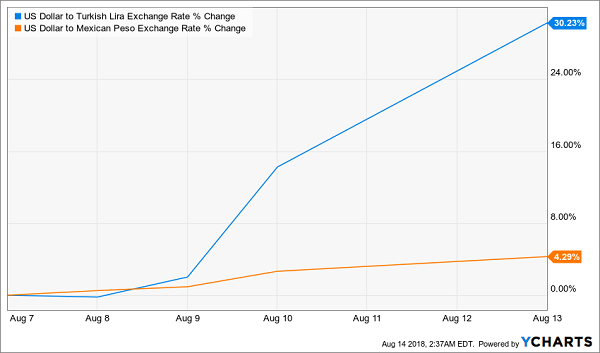 The market is turning its back on emerging markets after 2017’s blowout performance. The conclusion for investors is pretty clear.

Conclusion: Avoid emerging market debt and stocks, as well as the funds that trade them.

The 11 Foreign-Focused Funds You Need to Avoid Now

With emerging markets particularly exposed to investor panic right now, all the specialty funds in the table below (including BOE and TEI) should be avoided. And that is a shame, because some have huge yields (up to 14%) and incredibly strong long-term returns.

And that means when the market’s panic has gone too far, they’re worth picking up. But we aren’t there yet. Until we get there, these 11 funds are kryptonite for your portfolio, and you should avoid them for now: 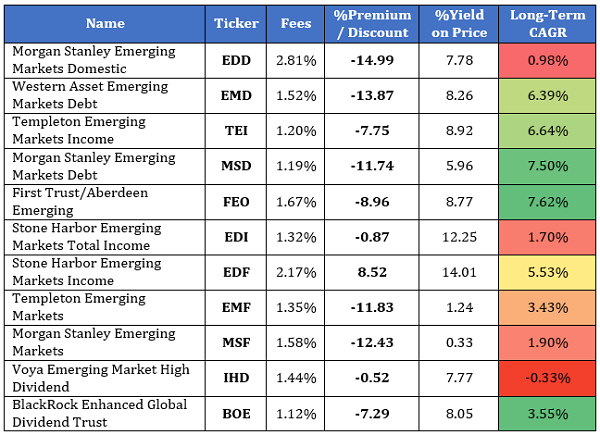 Until there’s more clarity from the Turkish government, its central bank, the IMF and European banks, these funds are suddenly up for some big potential losses. Avoid them for now.

Each of these 4 terrific high-yield funds focuses on the USA and, best of all, boasts a market price that’s way below its “true” value (that would be its NAV, financial-speak for what each fund’s portfolio is worth).

The takeaway? This completely abnormal price gap points to massive 20%+ price upside in the next 12 months!

PLUS, these 4 amazing funds also pay dividends 3 or 4 TIMES higher than your typical stock—up to 8.0%!

So you’re getting paid very handsomely while you wait for these funds’ discount windows to slam shut … and slingshot us to those huge 20%+ price gains.

Here’s a quick look at each of these hidden income (and growth) buys:

I can’t wait to show you all 4 of these high-powered CEFs close up. All you have to do is CLICK HERE to get the full story (names, tickers, buy-under prices and everything you need to know) right now!