The small-cap universe is offering investors one of the most elusive prizes of 2021:

As I recently wrote, Wall Street’s gaze has been fixated on the nearly uninterrupted yearlong rally in large-cap stocks—so much so that they appear to have ignored a full-blown correction in the small-cap Russell 2000.

Your average investor will be jazzed at the prospect of snapping up growth on the cheap, or at least cheaper. The blue-chip indices are overbought by just about every calculable metric, so even a relative bargain is a sight for sore eyes.

But craftier investors like you and I that don’t judge smaller books by their covers know that, if we know just where to look, we can get more than mere growth out of the market’s more diminutive picks.

We can secure a fat, regular paycheck, too.

Take It to the Bank

Lately, I’ve been pointing readers toward the financial sector because of its explosive dividend growth. Big banks and regional players alike have been pushing the pedal down hard of late—40% raises, 60% hikes, even overnight doublers!

Current yields, in a few corners of the sector, aren’t anything to sneeze at either. A group of regional banks I’m targeting yields an average of 4.0%—the kind of income you’d expect from a real estate investment trust (REIT) or telco, not a local bank with a few dozen branches.

However, unlike REITs and telcos, these smaller banks are loaded with gunpowder right now. That’s because interest rates appear poised to bottom out, and a return to even a 2% 10-year yield would effectively stuff their pockets with cash—sending prices into orbit and fueling further rounds of super-sized dividend hikes. 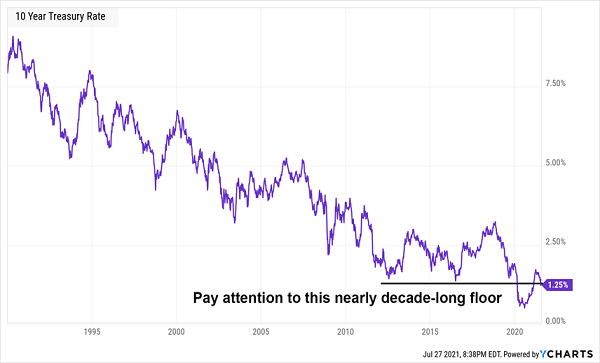 Let’s see what these under-the-radar banks have to offer:

Dime Community Bancshares (DCOM) is a great way to start off. This Hauppauge-based bank serves the state of New York via more than 60 branches “spanning Mountauk to Manhattan.” Like most of the stocks we’ll run through here, it provides a combination of personal and business products and services, from basic savings and checking accounts to title insurance to investment consultation.

Dime is currently digesting a merger-of-equals with Bridge Bancorp., which padded its New York coverage area. The company expects to grow its loans by 6% this year, and it’s booking new loans at higher rates than its current portfolio yield.

That bodes well for the dividend, which DCOM hiked by 71% earlier this year, to 24 cents per share. That represents just 30% of its 2021 estimated earnings of $3.25 per share. And you can buy DCOM for less than 10 times that profit outlook right now.

Horizon Bancorp (HBNC) is the parent of Horizon Bank, a Michigan City, Indiana-based regional with 74 locations in Indiana and Michigan.

Well…that number will soon be larger, as Horizon announced during Q2 that it would acquire 14 TCF National Bank branches in Michigan, bolstering its deposits by nearly $1 billion, and loans by about $280 million. Such is the M&A way in small banks—HBNC has pulled off 15 deals since 2002 (including the TCF deal, expected to close in Q3), in addition to 12 “organic expansions.”

And Horizon remains hungry, with management expressing interest in additional M&A even after its latest splurge.

That hasn’t gotten in the way of HBNC’s payout, which is up 77% since 2017, in fairly steady order. Shares are almost flat in 2021, however; as a result, trade at an appealing 10 times earnings estimates.

Horizon Is a Faithful Dividend “Tracker” 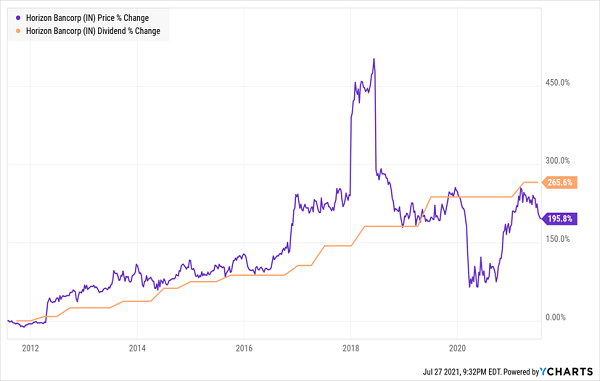 OceanFirst Financial (OCFC), which serves New Jersey, greater Philadelphia and metropolitan New York, is another M&A-happy regional that has completed seven bank acquisitions since 2015, and plans on expanding into the Boston and Baltimore markets.

This has been a dog of a stock over the long-term, delivering roughly 95% total returns in the past decade to the S&P Bank ETF’s (KBE) 155%. It hasn’t delivered much on the dividend-growth front, either—its last move was a 13% improvement to 17% per share … in 2018.

At roughly 10 times 2021 estimates, the stock still could be a bargain if it lives up to its growth potential, which is helped by its Philadelphia positioning and the perceived likelihood that it will enter additional markets. But the income proposition is weak here, at a good-but-not-great 3.5% yield and little consistency in payout raises.

Memphis, Tennessee-based First Horizon (FHN) might be a regional bank, but it has some muscle as the state’s largest bank and the Southeast’s fourth-largest regional bank. It boasts some 490 banking centers across 12 states, and boasts $87.6 billion in assets as of Q2.

Some of this heft was gained through the 2020 merger with Iberiabank, Louisiana’s largest bank.

FHN truly is a steal at current levels, which represent just 8 times 2021 earnings estimates. However, the recovery in its loan business could take longer than expected, and the company is showing quite a bit of caution on its buybacks. Moreover, while the payout has grown 66% since 2017, First Horizon is behind schedule on its annual payout increase for 2021. Caution might be warranted here. 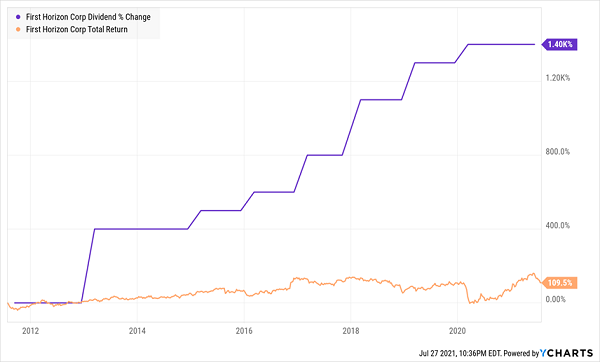 We get above the 4% yield mark with FNB Corp. (FNB), the parent of First National Bank. The Pittsburgh-based financial services company boasts more than $38 billion in assets across 340 banking offices in seven states and the District of Columbia.

Not to be left out, FNB is on the M&A warpath itself, announcing in mid-July the acquisition of Baltimore-based Howard Bancorp, which will roughly double its Baltimore deposits as a result.

Dividend growth is nonexistent here; the payout hasn’t budged in years, and while analysts are forecasting a recovery from 2020’s difficulties, there’s not enough in that growth to suggest a higher payout is nigh. Still, core loan growth is re-accelerating, so this could be a GARP (growth at a reasonable price) opportunity, with shares trading at 10 times estimates.

Umpqua Holdings (UMPQ), which gets us some West Coast exposure, is in a similar boat, showing little hope for dividend expansion, but a nice current yield and strong growth prospects.

Portland, Oregon-headquartered Umpqua has roughly 220 locations spread across California, Idaho, Nevada, Oregon and Washington. It not only provides personal and business products and services, but it also has a commercial branch with international banking, corporate lending and equipment financing. While loan growth has been low compared to its peers, Q2 marked a potential turnaround point, with loans (backing out PPP) were up 12% year-over-year. A continuation of that could make its already bargain-priced sub-10 P/E look like a downright steal.

It’s hard to expect much more out of the dividend, which hasn’t gone anywhere since 2018. But the company did announce a $400 million stock buyback plan to be completed within a year.

With No Dividend Growth to Chase, Will Buyers Flock to Buybacks? 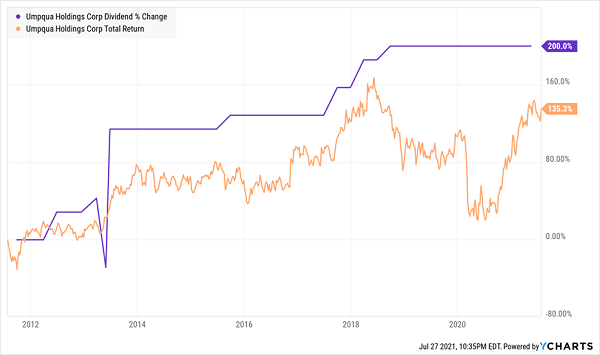 Heritage Commerce (HTBK) is the parent of another West Coast bank, this one (Heritage Bank) peppered across 17 cities in the heart of Silicon Valley. And while HTBK does offer personal products and services, it’s also one of the largest SBA Preferred Lenders in the state, and is a Preferred Lender for the USDA Business and Industry division.

The company’s second-quarter earnings revealed plenty to like, including strong organic commercial loan growth, high asset quality and a slightly lower TCE ratio. That prompted multiple analysts to adjust their 2021 and 2022 targets higher.

The dividend, which has grown modestly (+30%) since 2017, remained pat at 13 cents per share. Given a solid 4.7% yield, that’s not as troubling. But HTBK’s valuation sticks out like a sore thumb compared to these other small bank stocks, at nearly 15 times estimates.

That brings us to the gem of this group, at least from a dividend perspective: Marietta, Ohio-based Peoples Bancorp (PEBO), which has more than tripled its payout (and its share price) over the past decade.

PEBO’s Price Is Clearly Sensitive to Its Dividend 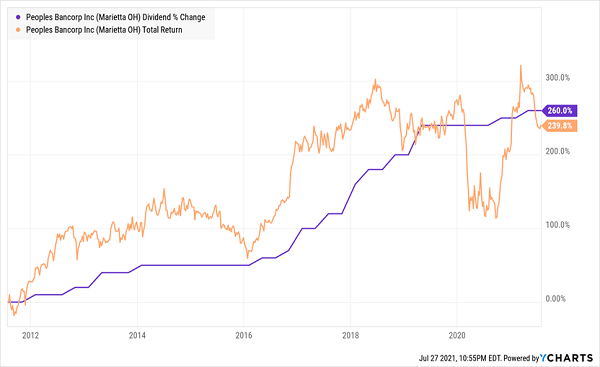 Peoples has more than $5 billion in assets, which it services across 76 branches in Ohio, Kentucky and West Virginia. And it had been enjoying solid if not stellar growth up until the pandemic; net interest income grew 34% between 2016 and 2019; net income widened by 72% in that time.

Dividend growth has admittedly slowed to a crawl over the past few years, though PEBO already has nudged its payout twice over the past year, showing a willingness to begin rewarding shareholders as its pandemic struggles wane.

Q2 earnings might give investors pause, as Peoples’ profits actually slid under Wall Street’s bar. But that drop was largely accounting-related—again, solid organic loan growth paints a promising forward-looking picture. So does the potential for M&A to boost the bottom line; Peoples is absorbing Premier Financial, which it said it would acquire in March in an all-stock merger.

The regional banking industry is a sterling example of one of the best total-return strategies on the market:

You can put this income-printing strategy to work today with a simple-to-manage, easy-to-understand group of just 7 specific tickers that can deliver a steady 15% every year—for life!

These seven stout income picks follow the exact same playbook as these banks, and they don’t need the Fed to sign off on every annual move.

Even better, they have one critical thing in common: They’re quietly handing smart investors growing income streams plus annual returns of 15%, 17%, 21% or more!

You can get the full breakdown on each of these 7 standout buys within seconds. Click here to get my complete research: names, tickers, dividend histories and a full breakdown of their operations—everything you need to buy with confidence.