5 Dividend Stocks Yielding Up to 7.4% to Buy Before the Holidays

Is retail dead? It depends.

While Amazon.com (AMZN) is indeed making life miserable for many brick-and-mortar outfits, I’d like to show you five dividend stocks in the space that could be a month or two away from getting a big shot in the arm.

So say the holiday crystal balls.

Salesforce.com, which provides annual holiday industry insights, recently issued its 2017 forecast, saying this year’s Black Friday will be the “busiest digital shopping day in U.S. history” – outdoing even Cyber Monday. It’s a tech dream report that includes stats such as 40% of orders coming from mobile phones, and millennials using Amazon’s Alexa and Apple’s (AAPL) Siri in droves. But while that does bode well for AMZN, don’t lose sight of the bigger picture – that’s also good news for brick-and-mortar retailers that have gotten their dot-com operations in shape.

That brings us to Deloitte, which sees not just good things for e-commerce sales, but holiday sales as a whole. It’s forecasting a 4.5% bump that outclasses 2016’s 3.6% growth, with Deloitte’s Rod Sides telling CNBC that “sentiment and spending indicators are firing on all cylinders.” Better still, “Even the big retailers continue to pick up e-commerce share.”

No, retail isn’t dead – you just need to pick your shots carefully. That’s why I have my eyes on these five retail dividend stocks yielding up to 7.4%. Their potential for a strong seasonal surge is nice, but they also boast several qualities that make them attractive, Black Friday bonanzas or not.

You probably can’t remember back to a time when Best Buy wasn’t seemingly days away from crumbling under the massive weight of Amazon. That has been the narrative for years, and for good reason. Best Buy’s revenues have been in decline for years, eaten away by Amazon on the left, but also big-box behemoths Wal-Mart (WMT) and Target (TGT) on the right.

And who can forget “showrooming” – that embarrassing practice of having someone walk into your store to check out the merchandise, then buy it online later on from home?

But sometimes the narrative is lazy and misses out on the finer details. I extolled the virtues of Best Buy last year – the company boasted steady cash flow and a healthy balance sheet – and I said profit growth should return as the retailer continues its “Renew Blue” turnaround. Indeed it did, with net income perking up almost 50% last year, and overall continued operational improvement helped shares crack all-time highs earlier this year.

Best Buy should get some help thanks to new iPhones, Nintendo (NTDOY) products and the Microsoft (MSFT) Xbox One X … and it’s also taking an aggressive swipe at Walmart and Amazon by offering same-day shipping in 40 markets by this holiday season.

Don’t sleep on this old-guard retailer. Those who already have are regretting it.

Best Buy (BBY) Is on the Bounce 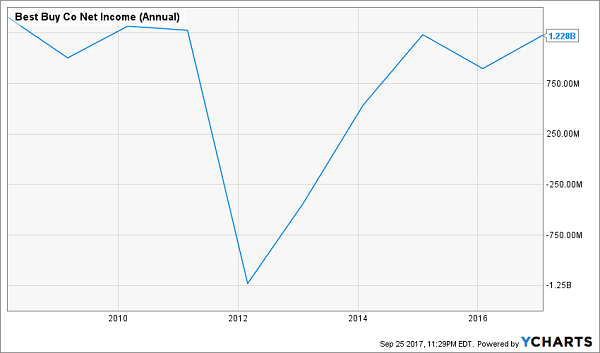 Yes, Williams-Sonoma (WSM) might put together some of the most cringe-worthy catalog entries in the home-goods space, but the owner of the W-S, Pottery Barn and West Elm brands is one of the premier names in upscale kitchen and décor.

While Williams-Sonoma stores are still a draw thanks to their artisan samples and superior service, there’s no question that WSM is a digital powerhouse. At the end of 2016, W-S crossed an important threshold that saw e-commerce sales surpass in-store sales as a percentage of revenue, at 51.1%. While that came in a slightly down quarter, full-year 2016’s top line grew by 2%, and analysts project roughly 3% sales growth over the next few years.

In other words, Williams-Sonoma isn’t just growing its e-commerce business – it’s growing its overall business. And the retailer continues its advances, with CEO Laura Alber saying at the end of last year that in 2017, W-S would be “implementing digital tools such as next-generation product information pages, 3-D product visualization and increased personalization to deepen online engagement of both new and loyal shoppers.” 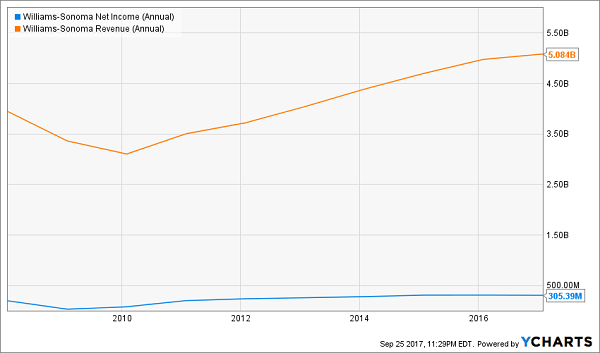 United Parcel Service (UPS) isn’t a retailer, of course, but it still benefits from consumers shopping in their jammies.

Someone has to deliver all those online orders.

UPS is approaching all-time highs set in 2016, though it has been a bumpy path. The stock was clobbered at the end of January amid what a disappointing fourth quarter despite brisk delivery business. The main issue was a heavy surge in business-to-consumer business (read: when you order something from Amazon) – a much costlier type of delivery for UPS that weighed on margins.

As a result, UPS announced it would pour money into its operations to better handle the continued breadth of e-commerce business, which dampened spirits in the stock. However, it’s shorter-term pain for longer-term gain, and UPS softened those prospects a bit by announcing this summer that it would charge more for holiday deliveries this year.

UPS, then, should take full advantage of a boffo holiday season for e-commerce. Meanwhile, longer-term investors enjoy the benefits of a payout that has grown nearly 50% in the past five years, and only represents half the company’s profits. 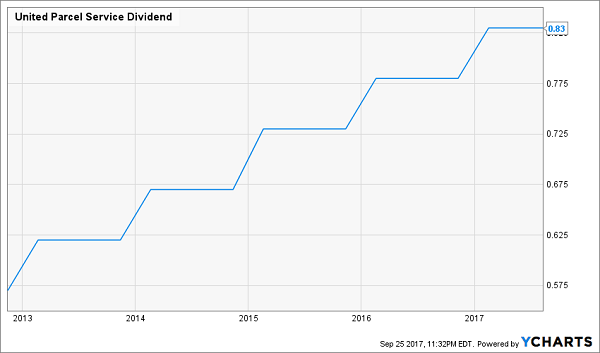 Home Depot (HD) is a must-buy ahead of the holiday buying season, and in fact, its attractiveness has nothing to do with the holidays.

For one, Home Depot’s Christmas isn’t Christmas – it’s spring. While most brick-and-mortar retailers announce tens of thousands of workers to help staff stores in November and December, HD stocks up on additional personnel to get ready for the homebuilding and home improvement season.

No, the timing here is purely coincidental. The reason to buy Home Depot is for a much more somber reason – rebuilding.

Hurricanes Harvey, Irma and Maria have decimated parts of Texas, Florida and Puerto Rico – all places where Home Depot has put down roots. All told, the company has more than 300 stores across the territory and pair of states, making it one of the likeliest beneficiaries as families, businesses and the government begins repairing homes, shops and infrastructure.

HD isn’t a terribly high yielder at just north of 2%, but it’s rapidly expanding its payout. Home Depot’s dividend has more than tripled in the past five years, and that includes a 30% jolt to the distribution at the beginning of 2017. 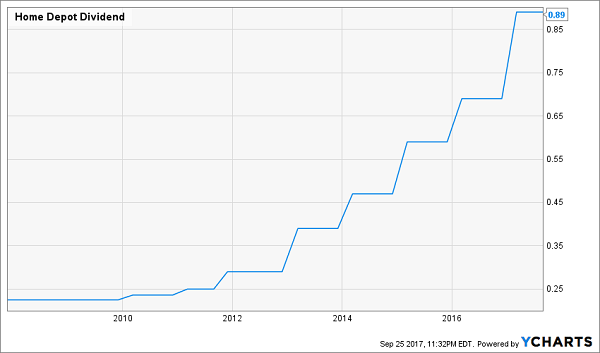 GameStop (GME) is the highest-yielding play among these five dividend stocks – and it’s also the trickiest.

On the one hand, I’m on the record as saying I think the video-game retailer’s payout is among a few dividends that could disappear some years down the road. But I don’t think we’re talking this year or next year … maybe not even for a decade or more.

And right now, GME might be on the verge of a perfect storm.

A few poor earnings reports have sent GameStop shares down a brutal 20% year-to-date. As a result, however, the stock trades at just 6 times forward earnings estimates, and at a yield north of 7%.

GameStop (GME) Has Been Driven Into Value Territory 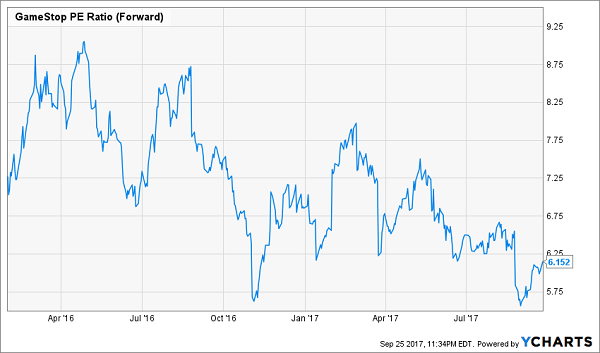 Meanwhile, GameStop enters a holiday season that should see the Nintendo Switch console continue selling like hotcakes, and as I mentioned before, Microsoft is launching its new Xbox One X – complete with first-in-class 4K Ultra-HD video gaming capability – in early November, and presales for that are clobbering any other Xbox console.

That’s potentially good for a quick pop, but these consoles should drive sales well past the next few years, and Sony (SNE) is likely to drop its Xbox One X competitor within the next couple years, putting GameStop back on the right side of the console upgrade cycle. That, and a generous dividend, makes GME worth a flier.

While I appreciate the usefulness of an occasional moonshot like GameStop, the path to a well-funded retirement isn’t paved with risky bets. The only way you can really retire with a sense of security is by compiling a portfolio that generates enough in total returns to both pay the monthly bills and grow your nest egg.

In short, you need to be targeting 12% in safe, annual returns.

But how do you actually get there?