5 Dividend Aristocrats That Can’t Even Keep Up With Inflation

Wall Street’s pundits love touting the Dividend Aristocrats as the crème de la crème of the income world. I get it. The ability to not only pay, but increase, corporate distributions uninterrupted for two-and-a-half decades is an impressive feat that clearly illustrates financial fortitude and sound fiscal management.

But that doesn’t make all Dividend Aristocrats buys. And in fact, five of them – which I will highlight for you today – are downright dreadful long-term dividend holdings.

When investors think of dangerous dividends, they tend to think of companies whose payouts could evaporate overnight. As well they should – nothing can derail your retirement plans faster than watching the dividends you rely on disappear in a flash.

But there’s a less flashy dividend danger that investors often ignore at their own peril: inflation. 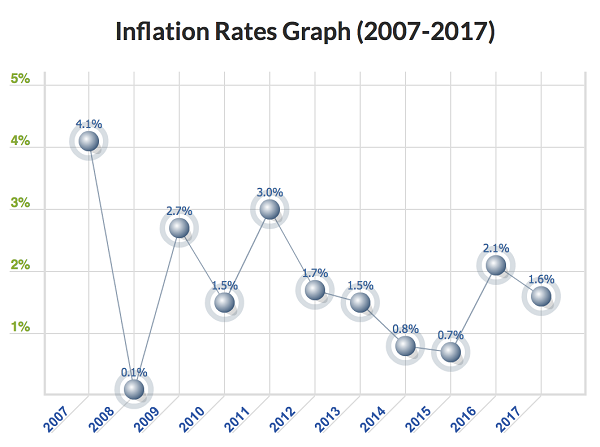 Investors tend to ignore inflation rates because they’ve been low for years. We’ve only touched 3% annually once since the 2007-08 market crash, and the June reading was a paltry 1.6%. Thing is, companies still need to increase their dividends faster than the rate of inflation, or else their payouts will actually have less purchasing power than they were the previous year.

And while 1.6% seems like an awfully low bar to clear (it is!), five Dividend Aristocrats have won this investor-cheating game of limbo, offering some of the most meager dividend growth on Wall Street of late:

File this first one under “to be determined.”

PPG Industries (PPG) is a paints fiberglass specialist whose reach spans more than 70 countries, and in fact is the world’s largest coatings company. PPG does its business via brands such as Glidden, Pittsburgh Paints and Olympic.

However, while PPG still does a robust domestic and international business, growth has disappeared of late. Revenues declined in both 2016 and 2015, and last year’s profit was the company’s lowest in years.

PPG’s 40-cent-per-share quarterly dividend still is well-covered, and it’s riding a streak of 475 uninterrupted dividends. But the company threw investors a curveball in April by not announcing an increase as expected, and the payout has now gone unchanged for five quarters.

PPG Industries does report earnings soon, so it still has time to rectify the situation, and considering the paintmaker’s last dividend hike (more than a year ago) was by about 11%, it’s hardly time to hit the panic button.

But if 2017 comes and goes without the company extending its 45-year dividend growth streak, management will have a lot of explaining to do. 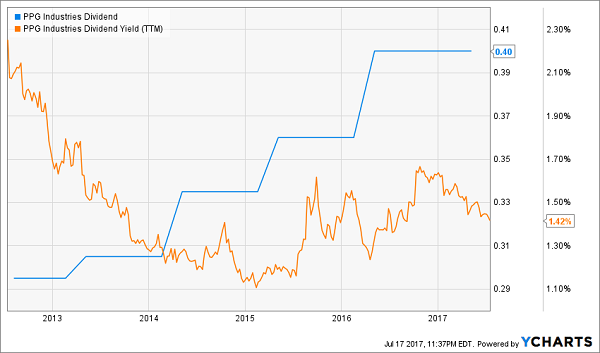 You could argue that PPG rival Sherwin-Williams (SHW) has an excuse for its most recent dividend hike, which was unsatisfying at best. But I would say that excuse is flimsy.

Sherwin-Williams announced a bid for competitor Valspar in 2016, and eventually closed the deal this summer at a $11.3 billion price tag. In the interim, SHW doled out a mere 1-cent uptick to the payout.

The thing is, the Valspar acquisition didn’t come from Sherwin-Williams’ cash hoard – SHW issued a ton of debt to finance the merger, and as a result, Moody’s downgraded Sherwin’s bonds by three notches! However, Sherwin-Williams ended up posting record profits for the fifth consecutive year, and it paid out less than 30% of its net income as dividends.

I understand exercising fiscal caution, but SHW cranked back its payout while leveraging the farm to make an aggressive buyout. That doesn’t mean the ploy won’t work, but given an already low yield, income investors who depend on Sherwin-Williams’ traditionally robust dividend growth may call foul if the company doesn’t return to form. 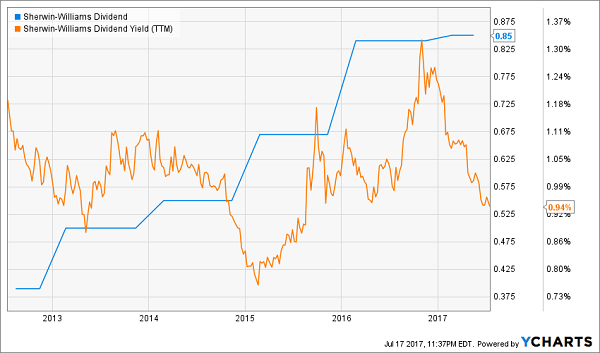 Unlike PPG and SHW, where the jury might still be out, Emerson Electric (EMR) looks just plain lifeless.

Emerson is a multinational industrial headquartered in Missouri that offers a wide swath of solutions, from ASCO valves and fluid control to Kato Engineering generators to Nelson industrial heating cables. However, the company is partly beholden to oil and gas companies for some of its products – a condition made more acute thanks to its 2016 acquisition of Pentair’s valves and controls division.

While shares are in a two-year upswing, it’s just the latest in a set of peaks and valeys that has EMR trading essentially flat since 2007. In fact, Emerson has fallen from the $60 perch thrice since then.

Emerson has become more adept at squeezing profits out of its business, but there’s only so much you can do when revenues are off more than 40% in a three-year span. And shrinking income, combined with an M&A-happy culture, is making dividend growth more and more of an afterthought.

EMR’s dividend has grown at less than 4% annually on average since 2012, and last year’s hike was a lonely 1%. That’s a lousy figure that ensures investors will have to settle for a modest 3% yield for some time.

Emerson Electric (EMR), Could You Spare Some Change? 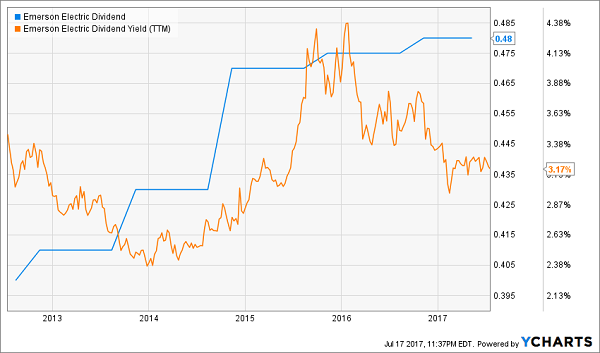 At least Chevron (CVX) has a healthier yield that sits north of 4%, but that’s the best thing I can say about its dividend.

Oil price declines starting in mid-2014 put most energy stocks in a hurt locker, and CVX was no exception, plunging more than 40% from 2014 peak to 2015 trough. For a time, Chevron’s dividend appeared to be in real jeopardy, though its 1-cent raise last August was enough to quell investors’ worst fears.

But “not awful” is far different from “good.”

West Texas Intermediate (WTI) crude oil is down more than 15% so far in 2017, and energy stocks are back on the ropes. OPEC production cuts haven’t been able to counter increased production in places like Libya and Iran, not to mention the U.S., and earnings projections are tanking across the board. In the past 90 days alone, analysts have dropped their EPS estimates for Chevron by more than 7%!

CVX is averaging sub-4% dividend growth across the past five years, and 2016’s hike might not be an anomaly. Chevron is still one of the titans of energy, but on the income front, its potential needle is resting on “E.” 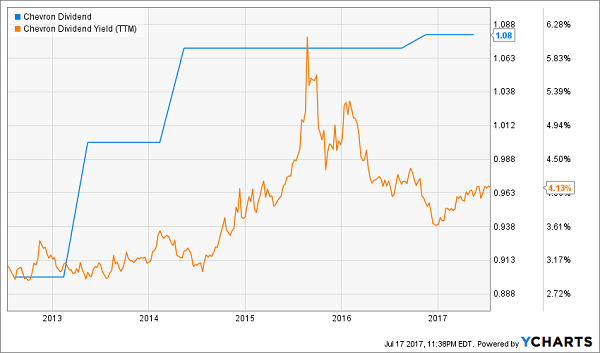 Steel and steel products manufacturer Nucor (NUE) has had an exciting past year or so as it and other steelmakers – from Steel Dynamics (STLD) to U.S. Steel (X) – have soared and crashed depending on how optimistic the market is about President Donald Trump’s ability to get his promised agenda through Congress.

The broader trend has been up, though, and not just on presidential conjecture. While revenues remain listless, the company’s tight management and ability to keep costs low helped Nucor turn out its biggest quarterly profit since 2008. That followed a 2016 in which NUE posted one of its best full-year profits in years.

However, it seems Nucor is miserly in good times and in bad. 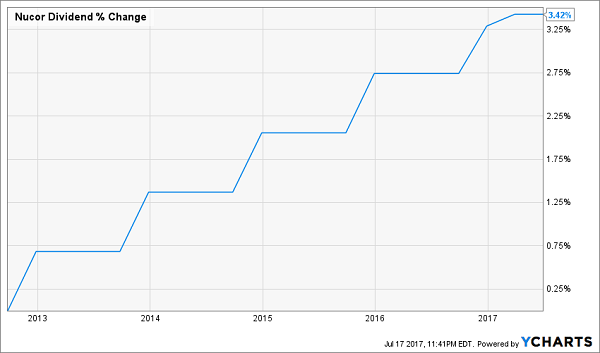 Nucor hiked its payout by a quarter of a cent last year for a 0.67% improvement, and infuriatingly enough, that met the gold standard of NUE dividend increases. That’s right: Nucor has averaged a sub-1% annual dividend hike every quarter for the past five years – a gesture that technically maintains its standing as a Dividend Aristocrat, but shows little regard for income-minded shareholders.

Lousy dividend growth that can’t even outrun inflation is a one-way ticket to the retirement poorhouse, especially in stocks that only yield 1% or 2% to begin with! In fact, none of these stocks have the potential to get you anywhere near what you need if you want to make it through retirement fully funded and worry-free.