5 Bargain Tech Dividends to Buy on This Dip

It’s usually the last place dividend fans look for big yields and surging payout growth—but it should be one of the first.

I’m talking about the technology sector. And before you dismiss me as crazy, check out this chart.

The Home of Payout Growth 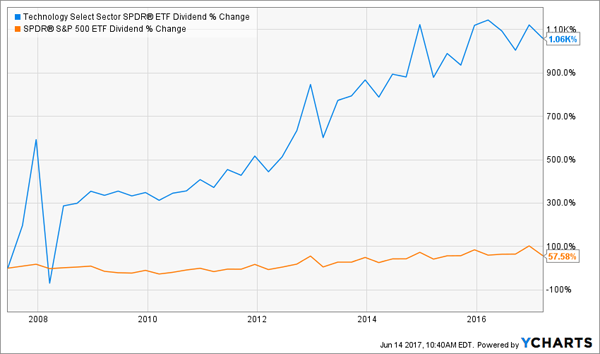 What you’re seeing here is the dividend-growth rate of the Technology Select Sector SPDR ETF (XLK) compared to the SPDR S&P 500 ETF (SPY), representing the market as a whole, over the past 10 years.

Sure, the blue line is choppier than the orange one—but that’s a small price to pay for a 1,000%+ income boost!

And as I showed you on May 15, there’s a direct link between a soaring dividend and a soaring share price. Nowhere is that more obvious than in tech, which has ridden its companies’ rising payouts to a blowout 10-year price performance: 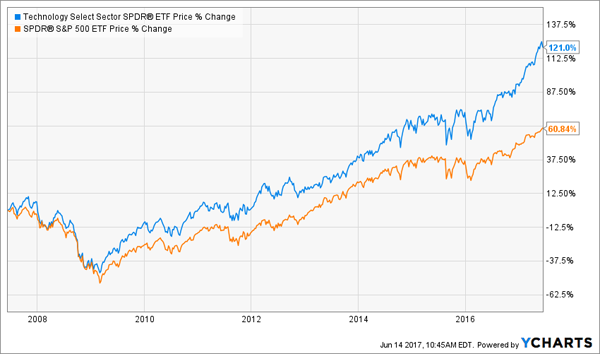 What all this means is that the “tech tantrum” of the last few days has given us a golden opportunity to pick up some top-quality names at terrific prices. I’ve got 5 of them for you today, and I’ll tell you everything you need to know about them in just a moment.

First, I want to share a few other crucial details absolutely no one is talking about.

Let’s start with the sector’s earnings, which are skyrocketing.

According to FactSet, S&P 500 tech companies will report year-over-year earnings per share (EPS) growth of 9.3% in the second quarter. That’s second highest among the index’s 11 sectors!

So far, 17 S&P 500 IT companies have pre-announced positive EPS guidance for Q2. That demolishes the five-year average and is the highest number since FactSet started tracking the data in 2006. 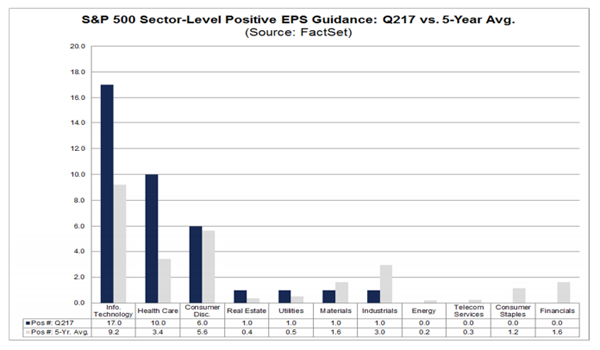 How about this: they’re insulated from interest rate hikes because their huge cash hoard—some $765 billion in all (with about a third of that belonging to my No. 5 pick; see below)—means they can hold off on pricier loans while earning more on their investments.

Throw all these things together—surging profits, strong balance sheets, lightning-quick dividend growth and the selloff—and you get a perfect opportunity to go contrarian and snap up some sparkling dividend growers at great prices.

Here are 5 strong picks, ranked in the order I’d put them on my own personal buy list today.

Tech Dividend Pick #5: The Elephant in the Room

No tech-stock article complete without Apple (AAPL). And though its dividend yield is too low to get our hearts racing—1.7% (which is one of the reasons why I’ve ranked it No. 5)—check out the smooth rise in the payout: 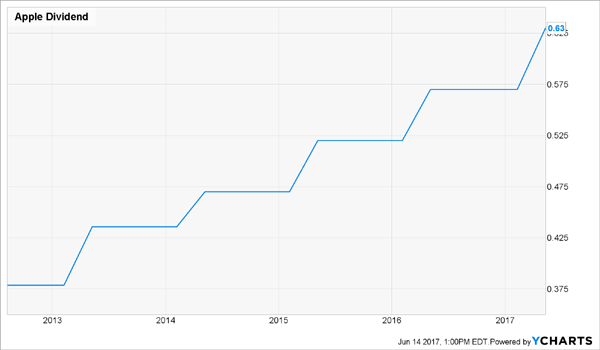 Of course, there’s plenty of buzz around the 10th anniversary iPhone due out later this year, but that’s distracting folks from the real story, which my colleague Michael Foster dove into back on February 10: Apple’s switch from a growth stock to a steady dividend play.

Consider the services business, where revenue soared 18% year over year in Q1—faster than any other segment. Services is home to consistent cash cows like the AppleCare service plan, licensing deals and movies and music from the iTunes store.

Which brings me to my second reason for ranking Tim Cook’s company fifth: even with its recent swoon, Apple trades at 16.7 times earnings, above its five-year average of 13.6. That could cap our near-term upside. But have no fear, because Apple’s surging payout and share buybacks also help throw a floor under the stock.

Intel (INTC) is usually written off as yesterday’s news, churning out chips for the dying PC market.

But anyone who bothers to look deeper will see something else: a company that’s dialed in to exploding trends like self-driving cars, the Internet of Things and field-programmable gate arrays (FPGAs): chips users can reconfigure on their own.

Management means business, too: in Q1, it threw $8.3 billion, or 21% of revenue, at product development.

Intel’s edge is its stout free cash flow, which lets it hike R&D, buy back shares and pay dividends (at a nice 3.1% yield, no less). The payout is rock-solid, too: even though management has goosed it 22% in a little under three years, it soaks up just 44% of free cash flow, so there are plenty more hikes to come.

An added bonus: the tech selloff, which has handed us a chance to get in cheaper than at any time in nearly a year: 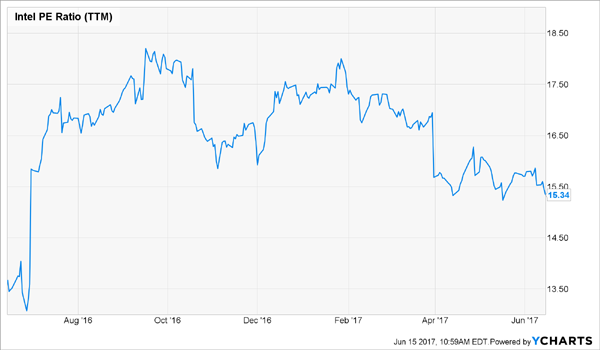 Texas Instruments (TXN) is a chipmaker like Intel, but it doesn’t play on the same field: it makes analog chips, which you’ll find in pretty much every electronic device.

This is a $48-billion market, and it’s fragmented, with TXN staking out just 18%, so there’s plenty of room for organic growth and acquisitions here.

Another reason why TXN ranks high on my list: the dividend. Its 2.5% yield is lower than Intel’s, but its dividend growth is in another league. In the last five years, management juiced the payout by 194% (!), so you’ll quickly build on today’s yield.

Right now, TXN trades at 21 times earnings, around the five-year average. That’s reasonable for a company whose runaway dividend growth has powered its shares to a 189% gain in that time.

My Top 2 Picks: High-Yield REITs for the E-Commerce Boom

Tied for first are two plays from a corner of the market no one links to tech: real estate investment trusts.

I’m talking about Prologis (PLD), with a 3.0% dividend yield and 379 million square feet of warehouse space in the US, and STAG Industrial (STAG), its small cap cousin, which pays 5.0% and does so monthly, to boot.

Why warehouse REITs? Two words: online shopping, which is crippling mall landlords but leaving their storage-owning cousins flush with cash and tight for space.

STAG has outperformed PLD over the past decade and it hands you that fatter yield, but its stock is much choppier, with a beta rating of 1.25, meaning it’s 25% more volatile than the market. 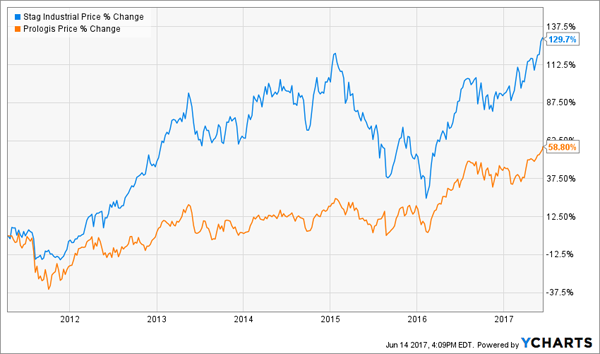 Prologis, meanwhile, has handed out much stronger payout growth in the last four years (since STAG started paying a dividend): 57% to 17.5%.

Both payouts are safe, and both REITs are reasonably priced: STAG trades at 17.5 times adjusted funds from operations (FFO; the REIT equivalent of EPS) and paid out 86% of AFFO as dividends in the last 12 months. That sounds high, but it’s manageable for a REIT with steady FFO like STAG.

Prologis trades at 20.5 times forward FFO—again, a fair price for this reliable landlord, which is on pace for high-single-digit FFO growth this year.

The dividend? Take it to the bank. Prologis’ payout clocks in at a very well covered 71% of FFO.

A growing dividend is great, but if you’re starting with a yield as puny as Apple’s, it’s not much help if you need income now!

That’s where REITs come in: they bring your portfolio’s average yield way up and cushion your nest egg when tech—or any other sector—falls out of bed.

Why? It’s right in the name: REITs are real estate investments, and real estate has a very thin tie to the stock market as a whole.

We can do even better if we aim for the REIT “sweet spot”: gaudy yields now and a dividend that’s actually accelerating.

Take my favorite REIT pick today, which boasts a massive 8.0% yield and a string of hikes that puts even Apple to shame! 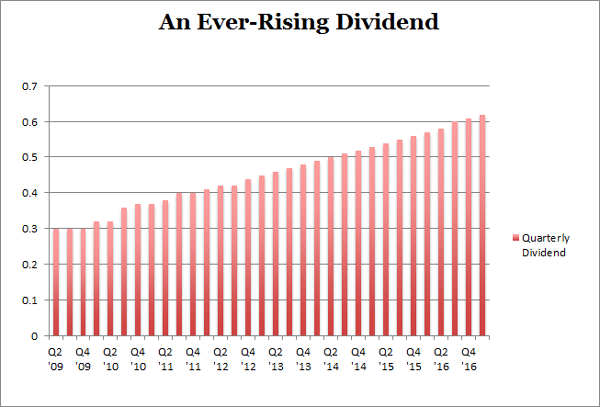 You see, my top REIT pick’s forward yield jumps to 8.4% when you consider we’re going to see 4 more dividend hikes in the next year. And you’re getting this rock-solid income stream for a song: less than 10-times FFO!

But I fully expect its valuation and stock price to shoot up 20% over the next 12 months, so you need to act now if you want to lock in that juicy 8.4% income stream.

This incredible REIT is a best buy in my “8% No-Withdrawal Portfolio,” which boasts a high (and growing) payout that lets you live on secure dividends alone in retirement.

I’d love to share everything I have on this REIT and the 5 other income wonders in my NEW portfolio—including their names, tickers and buy prices. Click here and I’ll send my full “8% No-Withdrawal Portfolio” research your way right now.