Over longer time periods, dividend stock prices tend to follow their dividends—for better or for worse.

Sometimes, the stock price gets there first. This can be a race to the sky, in the case of a rising dividend. Or a race to the basement, when a payout is about to be cut.

For example, we had been concerned about Kraft Heinz’s (KHC) dividend for years. Income investors “sniffed out” the inevitable payout cut before the lower quarterly dish became official: 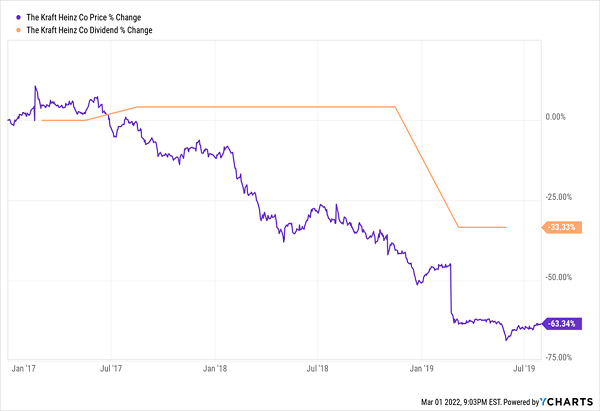 Investors waste no time ditching a troubled dividend when a firm has hacked its payout in the past. AGNC Investment (AGNC), a serial dividend chopper, saw its share price slide lower and lower prior to this payout cut:

Income Investors Bailed on AGNC Ahead of the Official Cut 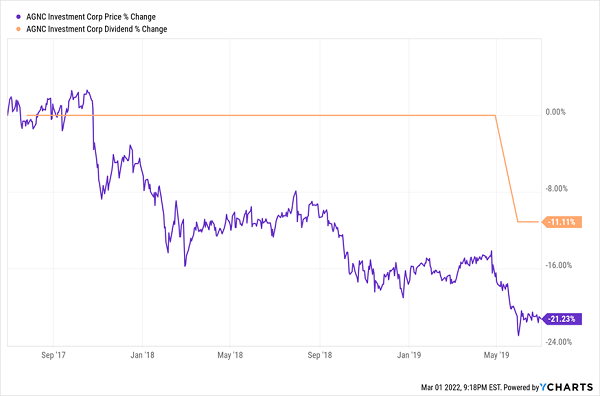 Many stocks look cheap today. Problem is, there are plenty of falling knives that we should avoid—because their payouts may indeed be in trouble.

Let’s look at some fast fallers—“yielding” up to 20.9%, at least for now—that are under some serious price pressure.

Pitney Bowes (PBI), which has for years been transitioning from old-school mail services to e-commerce, was just recently a perfect example of when a high yield was signaling serious problems.

The company has been in terminal decline for years as email has largely replaced snail mail, putting its legacy meter machines business in peril. A plunging stock price drove its yield into the double digits by 2019:

The Wrong Way to Seek a Yield Raise 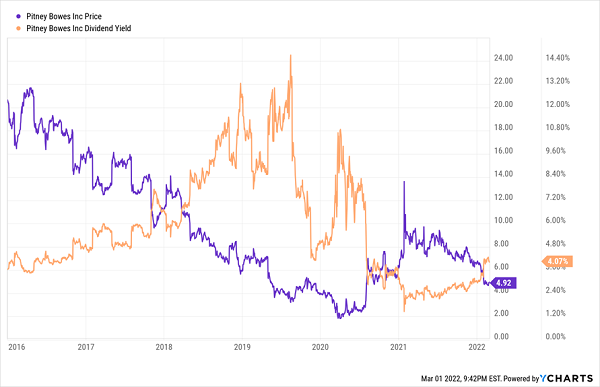 That yield “resolved” itself with a 73% dividend cut, and shares continued to plunge. While the stock eventually enjoyed a snap-back in 2020 (courtesy of getting swept up in meme-mania), shares are back below where they were at the time of the 2019 cut.

Profits, meanwhile, are a shell of the shell they used to be.

The Mail Isn’t Getting It Done 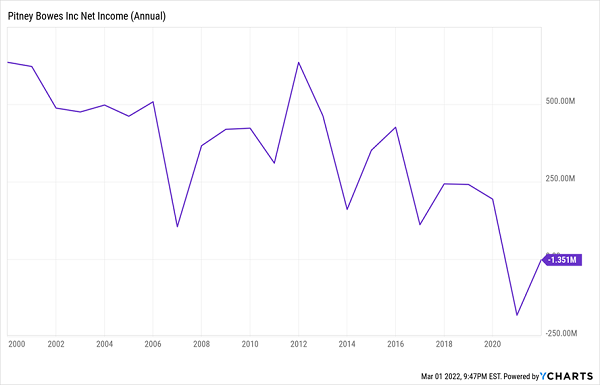 Yes, PBI shares losing about a third of their value has made the stock look a little more attractive in terms of both value and yield. But it’s fair to wonder whether this isn’t more of the historical same.

When it comes to tobacco stocks, you know most of the names: Philip Morris (PM). Altria (MO). British American Tobacco (BTI).

But you might not have heard of Vector Group (VGR).

Vector Group is a somewhat diversified holding company that’s made up of two very different arms.

On one side, you have the Vector Tobacco and Liggett Group subsidiaries, which include brands such as Even, Pyramid, Liggett Select and Eagle 20’s discount cigarettes. On the other, you have New Valley, which owns real estate investments in California and New York, among other places, as well as real estate brokerages in several states.

Surprisingly, Vector Group has managed to keep its top and bottom lines largely growing despite constant pressures on the tobacco business. 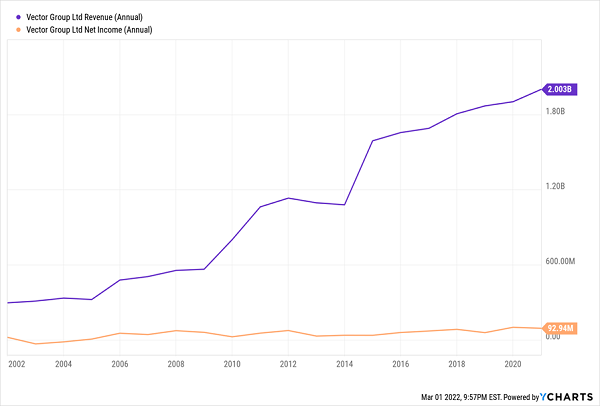 But that didn’t keep the company—which had previously put out 20 consecutive years of dividend hikes—from cutting its payout in half starting in 2020, hitting a much-needed release valve on an overextended payout.

The dividend is at least a little more manageable than it was. But Vector has lost part of its real estate oomph—at the end of 2021, the company completed the spinoff of its Douglas Elliman (DOUG) real estate agency—leaving tobacco to carry more of the weight.

In fact, the roughly one-third drop in VGR shares is largely attributable to the price readjustment from the Douglas Elliman spinoff, so there’s little new “value” here—just a trick of the numbers.

Equitrans Midstream (ETRN) is the nation’s third-largest natural gas producer, owning and/or operating some 2,850 miles of pipelines and gathering lines.

And as an energy play, ETRN has to be sitting awfully pretty in 2022…right? 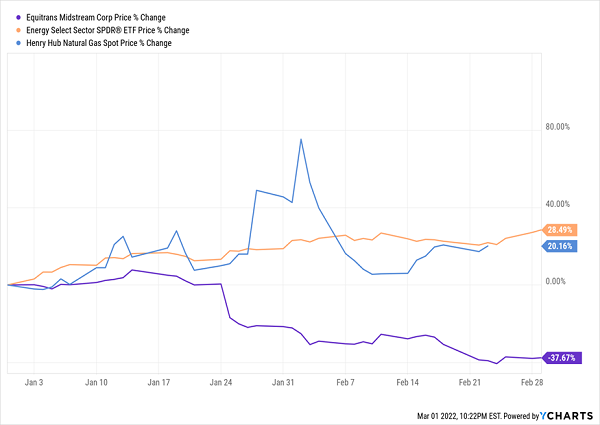 Let’s start out by pointing out that caution was already warranted at ETRN given a 66% dividend cut (from 45 cents per share to 15 cents) just a couple of years ago. This was another classic example of shares giving dividend investors an early heads-up: 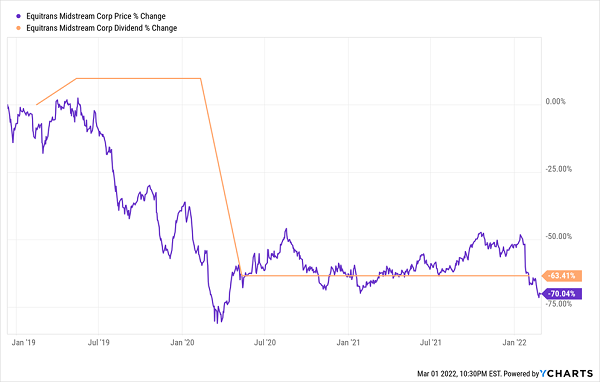 Fast forward to today, and the company is getting clobbered despite rising natural gas prices (and general energy-sector fear). Why?

In May 2021, I wrote that the company’s Mountain Valley Pipeline wouldn’t be in service until 2022. That situation has gone further downhill since then—the date has been pushed back to 2024 amid court rulings against the pipeline firm. That was announced alongside a wide Q4 top-line miss impacted by deferred revenues.

With a major growth driver pushed out to the horizon yet again, this 9.3% yield feels more like a siren’s song than a legitimate opportunity.

They’re similar to traditional equity REITs in that most of their profits have to go back into shareholders’ pockets as dividends. Where mREITs differ is in what they own. Instead of physical properties, they own “paper”—that is, securitized mortgages. The goal is to borrow money at lower short-term rates and generate income from the higher longer-term rates on their securitized mortgages.

Orchid Capital (ORC)’s corner of this world is residential mortgage-backed securities (MBSs), like those issued by Fannie Mae and Freddie Mae.

Now, a quick look at the long-term chart might give you the impression that lower interest rates over time put pressure on mREITs like ORC. 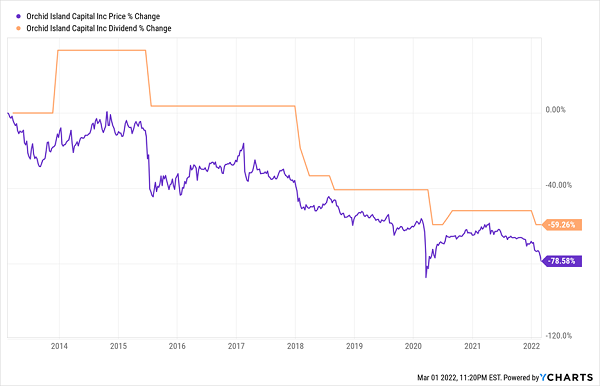 Truth be told, it’s typically the other way around. Rising interest rates—and even the threat of rising rates—usually cause problems for the mREIT class.

More specifically, though, mREITs want a wide spread between the short-term rates they borrow at and the long-term rates from which they generate income. And as you can see, after a couple decent years for the spread, the situation is turning ugly again in a hurry. 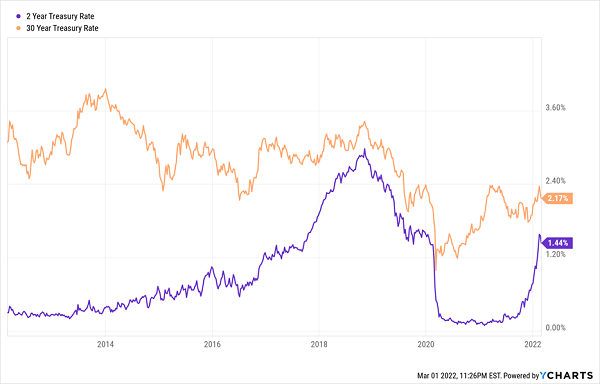 But a quickly deteriorating spread forced ORC to bring out the ax once more, with a 15% cut announced in January.

Stocks and Bonds Are Crashing, But We’re Doubling Our Money

While every major market is plummeting faster than ever, while investors are losing their shirts.

And while all the darlings of the stock market are getting crushed, a small, overlooked basket of recession-proof stocks are not just surviving—they’re set to thrive.

But these “Hidden Yield stocks” offer savvy investors the opportunity to double their money roughly every five years with predictable, reliable 15% returns no matter what the wider market does.

How they’re able to do this while supposedly idiot-proof blue chips can’t all boils down to what I call “The Three Pillars”:

You know what you don’t see here? A huge current yield like you see on ORC and these other falling knives.

Selecting companies with a proven track of increasing their dividend payments is the safest, most reliable way to get rich in the stock market. And I want to show you how it’s done. Click here to get a FREE copy of my 7 Recession-Proof Dividend Stocks With 100% Upside, including tickers, dividend growth histories, full analyses of each pick … and I’ll throw in a few other bonuses, too!