It’s a pearl of investment wisdom that’s been around for 100+ years. You’ve probably heard it over and over again.

It goes like this: if you want to make money in stocks, you must buy companies with unforgettable household names.

Too bad this “wisdom” is a relic of the past—so much so that it can actually kill your profits! I’ll show you why now, and give you four big names you should avoid, or sell if you hold them.

Then we’ll move on to two much better buys—off-the-radar companies that have been quietly handing their shareholders big price gains and massive dividend hikes that put their “cool kid” cousins to shame.

One of these two stealth income plays has already hiked its payout 106% in just the last five years—and is poised to easily pull that feat off again in the next five.

No article on brands would be worth its salt without Apple (AAPL), long the top dog on Interbrand’s yearly list of the biggest names—and the first brand stock I want to warn you about today.

Because despite Apple’s legions of fanboys (and girls), its stock still did this in the past year: 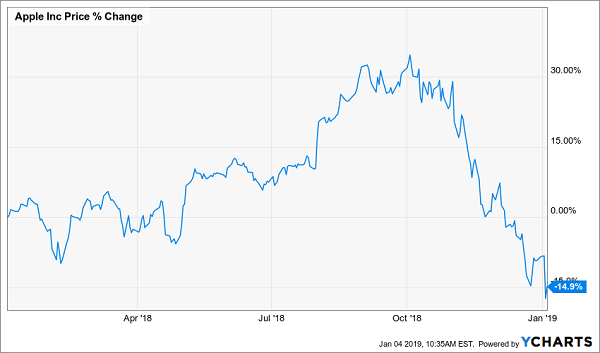 “Sure,” you might be thinking. “But that’s just one year. Apple has still clobbered the market over just about any other timeframe.”

But consider the bruising Apple has taken, despite its stellar brand: it’s now almost 40% off its 52-week highs. Plus it plunged 10% on January 3, its biggest single-day drop in six years.

Those are the kind of wipeouts you expect from a cash-strapped small cap, not the world’s most fawned-over name!

Other big brands haven’t exactly been killing it, either. Check out how McDonald’s (MCD), in blue, Toyota (TM), in red, and Coca-Cola (KO), in green, the top three non-tech stocks on Interbrand’s list, have fared since the market bottomed in ’09. 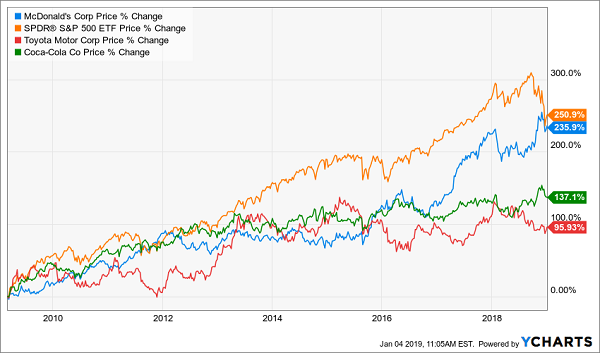 So what’s really going on here?

In a nutshell, those product reviews you see everywhere from Amazon to Facebook are giving folks more intel than ever—and they’re using it to zero in on products that precisely fit their needs, not just blindly grabbing the next offering from their favorite big-name brand.

To see what I mean, consider Apple’s latest face plant in China.

Sure, the company is taking a hit from the trade war and a general slowdown in the country. But that’s not the whole story; it’s also being pummeled by lower-priced domestic players like Huawei.

The latest numbers from research firm Counterpoint tell the tale: Huawei led the Chinese smartphone market in the third quarter, with a 23% slice, up solidly from 19% a year earlier. Vivo, the No. 2 player also grew, from 19% to 21%.

Apple? Its slice fell from 10% to 9%. Worse, its all-American brand actually works against it, setting it up as one of the first casualties if Chinese consumers decide to boycott American names should trade talks falter.

Coke Is Not It

So don’t be distracted by big names like Apple, and especially its consumer-staples cousin, Coke, which has posted negative sales growth in 21 of the last 22 quarters and pays a totally unsustainable 117% of cash flow as dividends!

The trouble with Coke is that, like Apple, its brand can undermine it, reminding folks that, at heart, Coke is about sugary drinks, no matter how much it goes on about the coconut water, organic teas and other healthier fare it’s been pushing out at a fever pitch.

Instead, we’re going to go small and invest in the sustainable dividend growers that are eating the big guys’ lunch, starting with the first of the two buys I have for you now.

Midcap Pick No. 1: The Only Car Stock You Need

I don’t know why you’d mess around with General Motors (GM), Ford (F) or Toyota when you could grab a diversified player like Penske Automotive Group (PAG). It’s easily lapped the big guys since GM’s came out of bankruptcy in 2010: 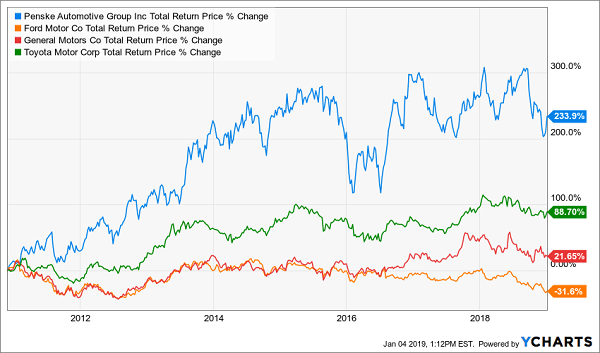 The best part is that, thanks to the pullback, you can still pick up PAG for just 8-times forward earnings—very close to its all-time low of 7.2. Sure, all carmakers are cyclical, but such a silly valuation gives us plenty of upside (and minimal downside) here right now.

And when I say PAG is diversified, I mean it: the company has 313 dealerships selling cars and commercial trucks in the US, Canada, Europe and New Zealand. It also owns a thriving parts business, financing arm and service operation, in addition to a 29% stake in Penske Truck Leasing.

Here’s another shock absorber the big guys can’t match: PAG’s near-even balance between new and used cars. These markets often move in different directions, and we saw that in Q3, when new-car revenue slipped 4.2%, but used sales surged 6.1%, easily offsetting that dip and driving a nice 2.4% rise in PAG’s overall revenue.

Finally, check out this dividend chart: 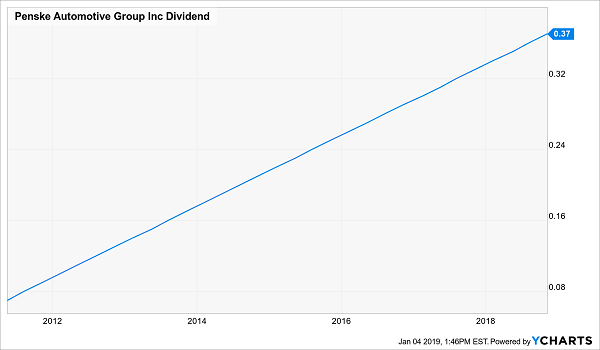 That’s right: PAG is one of a handful of stocks that raises its dividend every quarter. It’s done so for 30 quarters running and has boosted its payout 106% in just the last five years.

The kicker? The stock also yields a market-beating 3.2% and pays out a measly 27% of cash flow as dividends, so this payout—and its growth streak—are safe.

Midcap Pick No. 2: An Accelerating 4.1% Payout on the Cheap
Leggett & Platt (LEG) is so boring it would make the stodgiest investor’s eyes water: it makes a bevy of manufactured goods, from floor underlayment to mattress springs—the latter of which is its biggest segment.

When it comes to Leggett, here’s the key thing you need to know: mattress sales are skyrocketing. According to Transparency Market Research, this will be a $43-billion business in 2024—54% bigger than it was in 2017.

It’s also a business that’s being taken over by custom mattress makers peddling their wares online; Leggett sees online mattress sales doubling in the next four to five years, which is a big reason why it just paid $1.25 billion for Elite Comfort Solutions, a maker of memory foam with a roster of online mattress sellers as customers.

Funny thing is, you’d never know this by looking at Leggett’s share price, which dove 23% in the past year, with almost all of that coming in the last three months.

That’s turned two vital numbers in our favor: the dividend yield, which, at 4.1%, is the highest it’s been in more than six years; and the forward P/E ratio, which is at 14.1—near all-time lows—baking in some nice upside while helping keep the stock from falling out of bed.

In fact, Leggett is one of a very few midcaps that’s also a Dividend Aristocrat, having hiked its payout for 47 straight years. And as you can see below, these hikes have been getting bigger since 2016: 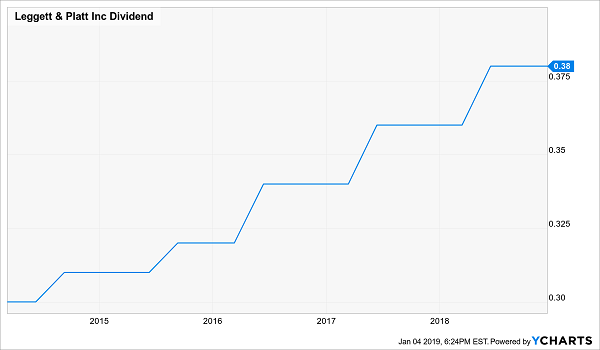 My advice? Grab this ignored midcap manufacturing star now—before it makes its next big move up.

The 3.2%+ dividends you get from the two stocks I just showed you are great—but you’d still have trouble retiring on them.

By simply bypassing regular stocks and diving into this too-often-ignored corner of the market instead, you’ll instantly tap retirement-saving dividends of 8.1%, 8.6% and even 11.5%!

How do I know? Because I’ve been investing my own personal cash in these life-changing income plays for years.

To get a sense of what these amazing income plays can do for you, consider this: let’s say you want to invest in infrastructure stocks—a promising sector, as both Republicans and Democrats see fixing our crumbling roads, bridges and power stations as a top priority.

Check out what some of the top names in this space pay right now:

But if you buy these very same stocks through one of my favorite Dividend Conversion Machines, those measly 2% payouts suddenly do this:

That could be enough for you to retire on dividends alone, without having to sell a single stock in retirement!

I’ve just released an exclusive Special Report detailing the 4 best Dividend Conversion Machines for you to buy today. These battle-tested investments boast yields all the way up to 9%.

The best part? These 4 unloved income plays are so cheap that I fully expect them to surge 20% in the next 12 months! And you’ll grab that gain on top of the 8%+ average dividends they pay out.

Don’t miss your chance to grab these 4 picks before they start their next move up. Click here now and I’ll give you all the details, including these 4 Dividend Conversion Machines’ names, ticker symbols and my complete research.