The Fed has crushed many retirements because bonds simply don’t yield enough. Heck, neither do most stocks thanks to the equity bubble they’ve inflated!

But we dividend-focused retirees have a four-letter secret at our portfolio’s disposal. I’m talking about yield machines that pay up to 8%. And thanks to a slow 2020, these stocks are still reasonably cheap. I’m talking:

Real estate investment trusts (REITs) are a great source of yield. If you’re a regular reader, you’ll probably recall our reasons why REITs hold up well against inflation.

Today we’ll discuss some studies that support this “inflation-proof” position.

In theory, inflation should weigh on REITs much the way it does on many yield-bearing assets. If the Fed fights off inflation with higher interest rates, and people can get more yield out of “safer” fixed income, why deal with the added risk of equities?

But in practice, the REIT asset class is unsurprisingly resilient in the face of rising rates. In fact, according to Neuberger Berman research, the asset class does its best work when inflation is running hot: 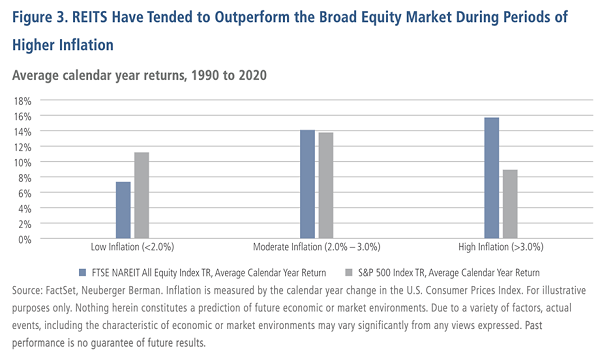 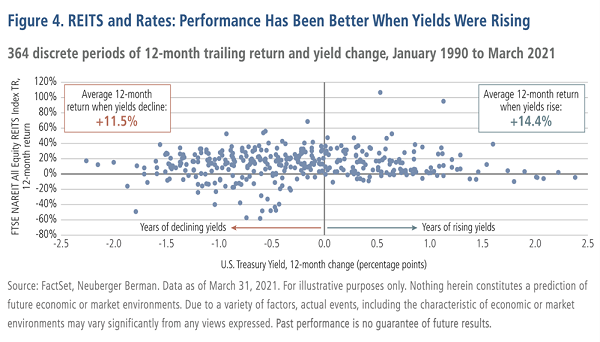 Why? Since they’re merely renting out space, they don’t face issues such as rising costs for labor and raw materials. And their dividend growth typically outstrips inflation.

It’s not even close, according to Neuberger:

(Since 2019), REIT dividends have grown by almost 250%, whereas those nine years of inflation amounted to less than 25%.

So where can we bunker up to take on Jerome Powell, all while collecting yields of 7% to 8%? Here are three places worth a closer look:

Preferred Apartment Communities (APTS) isn’t quite what the name seems. The REIT, which owns 117 properties in 13 states—primarily in the Sun Belt—does specialize in Class A multifamily properties. But it also deals in grocery-anchored shopping centers, as well as Class A office buildings.

As you’d guess from the portfolio, APTS has struggled mightily ever since COVID spread across the States. Over the past four quarters, Preferred Apartment’s “core” funds from operations (FFO, an important measurement of REIT profitability) has dropped by between 11% and 42%, depending on the quarter.

Management saw the writing on the wall early on, electing to cut the dividend by 33%, to 17.5 cents per share, as of its June 2020 payout.

So, how exactly could a REIT like this help you battle inflation? 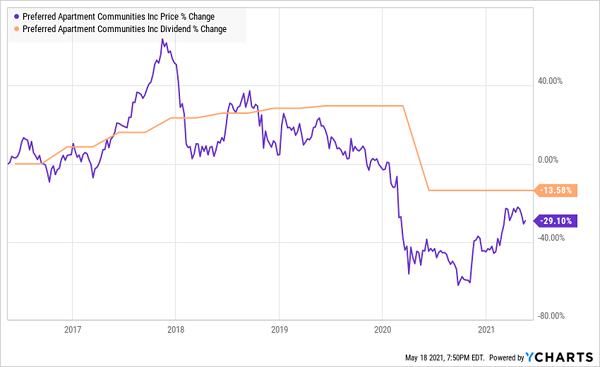 For one, Preferred Apartment Communities is paring down what could be the weakest link of its portfolio going forward: office buildings. In mid-April, the company said it would sell off seven office properties and an office real estate loan to Highwoods Properties (HIW) for $717.5 million.

The transaction will allow APTS to focus on two property types instead of three, with plans to continue growing its Class A suburban multifamily portfolio. The company also expects to redeem some of its preferred shares.

The immediate downside is a drag on Core FFO, with the company reducing its 2021 guidance from a range of 81 to 89 cents per share to a range of 73 to 83 cents per share. However, the company notes that “this may be offset to some extent based on the use of the proceeds, the timing of redeployment of proceeds, and G&A savings.” More important to us, however, is even at this lower guidance, APTS shares are trading at just about 12 times expected FFO—a fairly reasonable price for a 7%-plus yield.

And prior to COVID, Preferred Apartment Communities was a rare bird in that it upped its payouts every six months, rather than every year. Management has some difficult waters to navigate for now, but they have investor income in mind, and that the payout will resume its growth as finances allow.

One REIT that won’t be steering away from office properties anytime soon is Office Properties Income Trust (OPI), one of the leaders in the office real estate market.

OPI’s portfolio is made up of 170 properties representing 24.6 million square feet of space across 34 states, from coast to coast. The bulk of its properties are leased out to single private tenants, as well as single and multiple government tenants, and 65% of its revenues are derived from investment-grade tenants.

But high-quality though its tenants might be, OPI was hardly spared the COVID scythe, and shares have been lethargic in coming up off the mat.

OPI Still Off By Almost Half Since 2019 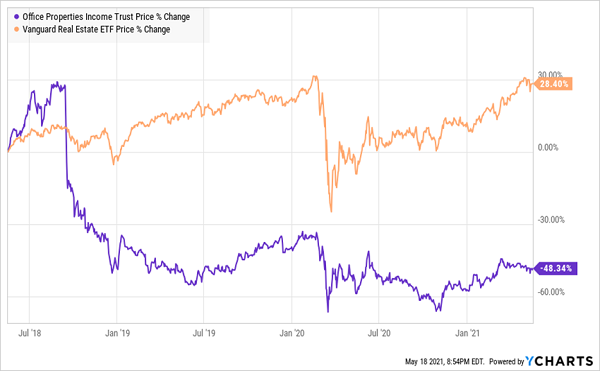 Interestingly, OPI’s books don’t look that bad given all of the hair-pulling over the sector. 2020 normalized FFO was off 10% to $5.39 per share. Cash Available for Distribution (CAD, a metric taking normalized FFO and backing out several recurring expenses and other items, which Office Properties’ board uses to determine distributions) was off by less than 5% and was 170% of what OPI needed to cover the payout.

And CAD actually improved, albeit marginally, in the first quarter ended March 2021.

The problem that will continue to plague Office Properties Income Trust shares is the view from 10,000 feet. The U.S. (and the world) is experiencing a generational shift in how and where people work—one that is resulting in scads of additional office space and less demand for it.

That doesn’t mean OPI is doomed—it appears to be among the best office REITs from an operational perspective—but a full recovery in shares could be years out. Moreover, it seems unlikely that the REIT will be quick to raise its dividend anytime soon. The payout has grown at a modest 3% annual rate over the past decade, and only sporadically.

One last thing that’s a little irksome: Shareholders must pay up when OPI performs particularly well. That’s because OPI is externally managed, by a firm called RMR, and the company has to accrue for a possible incentive fee based on its total shareholder return over the past three years. Back-breaking? Hardly. But it’s a little more difficult for shareholders to stomach when the stock trades sideways.

CTO Realty Growth (CTO) is a diversified multi-sector property owner that owns 27 retail, office and hotel properties representing 2.8 million square feet of space across 14 states, with its largest concentration of properties (~33%) in Florida. Tenants are a who’s who of big business, from Ford (F) and General Dynamics (GD) to Verizon (VZ) and Lowe’s (LOW).

But CTO Growth is a bit more than that. It also owns a 23.5% stake in net lease REIT Alpine Income Property Trust (PINE). And it’s part of a land joint venture with an estimated $70 million to $95 million in remaining land CTO hopes to sell as it raises funds to buy additional properties.

The immediate thing that pops out here is eye-popping dividend growth. CTO shares paid just 4 cents quarterly in 2016. Since then, the payout has been juiced to a buck quarterly—and the REIT paid out a whopping $11.83-per-share special dividend in December that equates to a nearly 23% yield at current prices!

And amazingly, this REIT only trades at a little more than 13 times the midpoint of this year’s forecast FFO.

If it seems odd that you’re just now hearing about a company capable of printing money at such a rapid pace, it’s because CTO only recently converted from a C Corp into a REIT structure just a few short months ago. 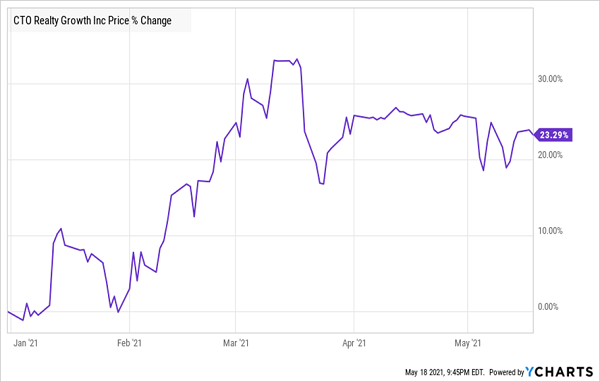 The fact that a third of CTO’s properties are in the troubled office-space industry should be enough to give us pause. But throw in its relatively short trading history as a REIT, and it’s obvious that we should let CTO breathe a little before depending on it in our battle against inflation.

Can Your Stocks Survive the 50-Year Retirement Storm?

A once-in-a-generation storm is brewing.

I’m not talking about hurricanes or floods. I’m talking about an inflationary storm that could sweep away the savings of unprepared investors.

But for those who know the proper way to position themselves? Well … the last time something like this happened, I turned a modest $2,000 investment into $154,000 in just 48 months.

Here’s what we’re up against:

For the last two decades, the Federal Reserve has kept interest rates under 2% for the vast majority of the time … and pegged them near ZERO for roughly one third of that time. That starves any investor looking to earn reasonable returns without taking big risks!

But what’s really terrifying is that the Fed’s unstoppable printing press is just the beginning of the “50-Year Retirement Storm” I’m warning my readers about.

So, how do we keep our savings from going underwater?

We have to throw out the dated 1970s playbook that first-level investors tend to cling to when inflation fears intensify. Our modern “2021-style” inflation is more likely to rhyme with 2009.

That means we need to do three things:

Let me show you how I’m making my own preparations. Click here and I’ll explain my favorite dividend stocks and funds for profiting from this coming inflation retirement storm.