One set of trades every decade. Not bad.

It’s the way of the world. There’s always something brewing. From the “original crash” of modern times, 1987, to the tech bubble bursting in 2000 or the financial world nearly collapsing in 2008.

Now, it’s 2020, and the world is again ending. We’ll make it to the other side, of course, but between here and there we are going to have a fantastic opportunity to buy blue-chip dividends.

Consider industrial conglomerate 3M (MMM) and the opportunity it presented in 2008. The maker of Post-it Notes, Scotch tape and literally thousands of other products lost 56% its value during the Great Recession bear market, just about on par with the broader market. But its yield shot up to nearly 5%—levels it wouldn’t see for another decade.

3M Only Pays During Panics 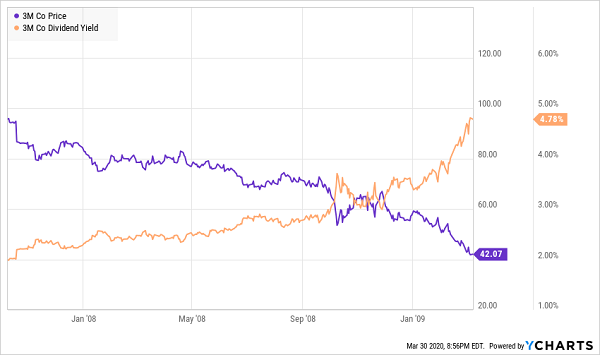 Through 2018, investors who nailed the bottom were rewarded with a nearly 600% total return on their investment, topping the broader market’s advance by more than 220 percentage points. 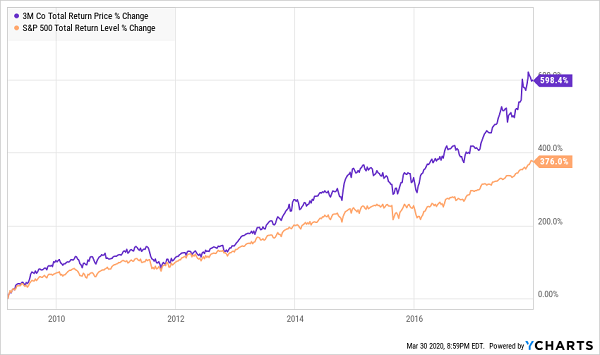 It’s hard to imagine Home Depot (HD) throwing off a high yield, but indeed it threw off as much as 5% en route to losing 46% by the bear market’s nadir.

How Dividend Doers Get More Done 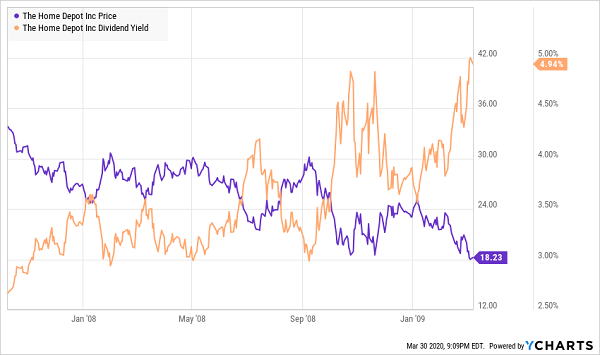 Again, though, investors who had raised cash to buy a high-quality company such as Home Depot—reflecting an industry that was never really going to go away—were rewarded with returns they probably still tell their friends about. 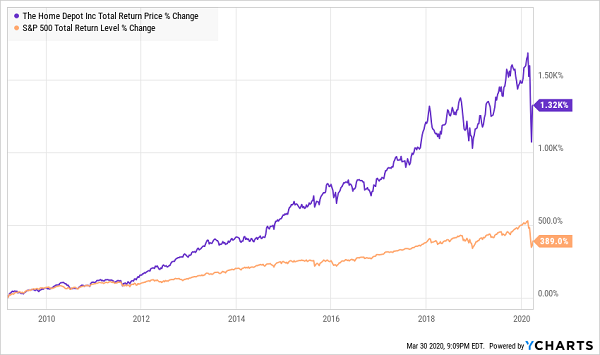 Even Realty Income (O), the gold standard of real estate dividend growth, was panic-sold to the point where a company that collected rent from 7-Elevens and Walgreens pharmacies was throwing off a casual 11% yield.

O What a Yield 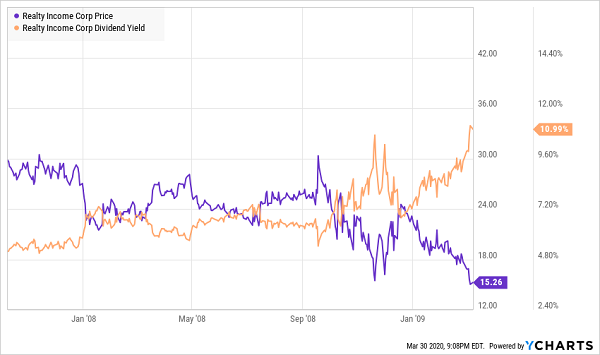 You’re more likely to see that kind of yield on a company that’s just about to cut its payout. Just ask Macy’s (M) and Ford (F).

But Realty Income went on to extend its streak of consecutive quarterly increases by another decade-plus. Not to mention, it outperformed the index by nearly 115 percentage points.

Not every stock is so lucky. Investors tried their hands at hundreds of high-yield stocks only to watch those yields double, then disappear, as those companies plunged into the abyss.

But by focusing on value, not just cheap prices, and examining how the business can come out of what’s almost sure to be our country’s next recession, we should be able to identify some once-in-a-generation income plays.

I want to highlight a few stocks for you today that are yielding more than they have in years—or ever—and look like high-potential buy-the-dip plays.

Packaging Corp. of America (PKG) is the least exciting component of one of the hottest trends of the past decade: the digitalization of retail. You have companies such as Amazon.com (AMZN) that disrupted the brick-and-mortar model, you have companies such as Walmart (WMT) making fantastic strides to catch up with their own e-commerce operations, tech stocks like Shopify (SHOP) that brought e-commerce to the little guy…

…and then you have Packaging Corp. It makes boxes.

OK. It’s more than just boxes. It’s corrugated containers, retail packaging, displays, e-commerce packaging solutions (of course), and it even has some of its own branded technologies such as Hexacomb and Falconboard.

My Hidden Yields investors tripled the market with PKG years ago before we cashed out, and it has popped back up on my radar of late. The stock has been resilient, only losing half as much as the S&P 500 in this bear market—naturally, as there’ll be plenty of shipping container needs while people order form home. But its losses have been enough to drive its yield to nearly decade highs.

The 3.5% yield is decent, but hardly good, especially considering that Packaging Corp.’s dividend growth is sporadic. Moreover, revenue projections for the next two years are effectively flat, so there’s not much to drive the price from here. 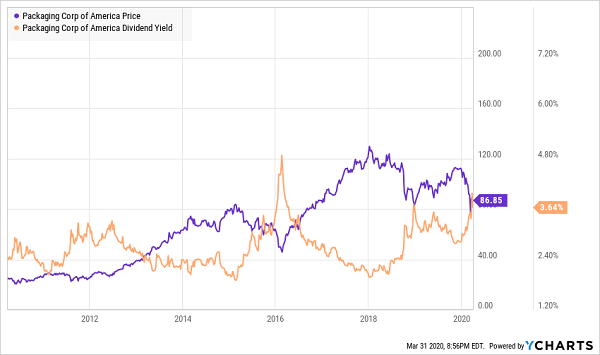 But PKG might look much more attractive if it gets caught up in another deep panic selloff.

Like PKG, you’re not getting a screaming yield from Tyson Foods (TSN), but the chicken, beef and pork producer’s shares are currently gushing cash compared to their historical norms. 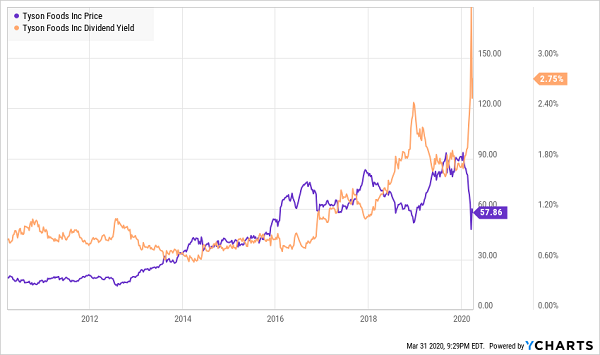 Tyson’s stock had been doing extremely well heading into 2020 despite the company having to navigate an African swine flu that has caused pork markets to go completely haywire.

“In my 39 years in the business, I’ve never seen an event that has the potential to change global protein production and consumption patterns as African swine fever does,” Noel White, president and CEO of Tyson Foods, said last year.

However, TSN has been on the downswing throughout most of 2020. That’s largely because of coronavirus-induced uncertainty; the company missed Q1 revenue estimates and warned that volatility could affect second-quarter growth.

But there’s still opportunity for Tyson, which said it’s entering “the most significant shift we’ve ever initiated”: a shift in producing more meat meant for U.S. supermarkets rather than restaurant foodservice. In fact, the company is paying out about $60 million in bonuses to truckers and other “front-line workers” as it tries to meet increased demand.

The pros are looking for profit growth in the mid- to high teens this year and next, and that’s after lowering their estimates to account for coronavirus-based issues. And TSN shares, off 40% from their highs, yield as much as they ever do while trading at a single-digit P/E. Tyson has “recovery play” written all over it.

First Industrial Realty Trust (FR) is a logistics REIT in the same vein as Prologis (PLD) and STAG Industrial (STAG). The company boasts 63.4 million square feet of space across 450 properties spread from coast to coast.

More than three-quarters of the business is bulk warehousing, with most of the rest consisting of regional warehousing and light industrial. Some 95% of its portfolio is within 30 miles of population centers averaging more than 1 million people.

Naturally, First Industrial is a play on e-commerce – the company points out that e-commerce sales are growing 12% year-over-year, to an expected $679 billion in 2020. And it estimates every $1 billion of e-commerce sales requires 1.25 million square feet of space to service it.

Unfortunately, while the coronavirus has sparked more of the consumer behavior that drives logistics needs, FR has lost about a quarter of its value so far in this bear market, driving its yield to new highs. 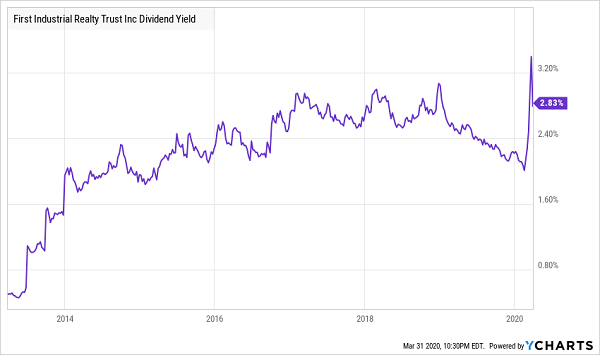 Why? Well for one, the supply chain has been gunked up; major U.S. ports are seeing double-digit declines in volume thanks to industrial output declining abroad. And a recession surely would weigh on First Industrial’s tenants—less money in consumers’ pockets means less ordering, no matter where they’re doing it from.

If you’re an optimist, this is the time to jump into FR. A quicker-than-expected economic AND stock-market recovery would bode exceedingly well for First Industrial and its peers. And its dividend, while not robust, is exceedingly well-funded at just 63% of adjusted FFO.

All of these stocks have one fatal flaw: Their yields are too low to deliver significant rewards. You’re effectively gambling that each stock will stage a massive snap-back, and that you’ll time the top perfectly when you sell.

But why repeatedly roll the dice in Wall Street’s casino when you can build real wealth—in bull and bear markets alike—by simply sitting around and waiting for your monthly income checks to roll in?

My “10% Monthly Payer Portfolio” is an impressive stable of some of the market’s most powerful income payers. When held as a total income portfolio, they’re capable of generating $4,166 in monthly dividend income—effectively earning you a $50,000 yearly salary on a mere $500,000 retirement nest egg.

These aren’t your everyday dividend stocks. Instead …

Do you plan to pay the bills with retirement income? These stocks are perfect for you.

But the 10% Monthly Payer Portfolio even benefits investors only now starting to build their wealth. That’s because the power of compounding works even harder on monthly dividends, so you’re getting richer off the exact same income a quarterly payer delivers!

My favorite part of this portfolio is its simplicity. Unlike a lot of “income-generating strategies” that end up requiring you to execute complicated options strategies or chase down distressed income payers, my 10% Monthly Payer Portfolio requires just two steps:

This bear market should be a wake-up call to every investor who relied on a seemingly endless bull run to finance their retirement. You simply can’t retire on price gains and flimsy dividends. You need real income…and the time to start collecting is now.

Let me show you how to collect $50,000 a year in dividend income. Click here for instant access to my “10% Monthly Payer Portfolio”  and start collecting steady monthly dividends today!