3 Exploding ETF Trends (and 33 Funds You Can Buy Now)

If you’re like most folks, you probably think it’s tough for any fund to beat the S&P 500, especially in a year when the index jumped some 15%.

But you’d be wrong.

Truth is a lot of funds are doing better, with over 660 beating the S&P 500. And the top-performers share 3 common themes that could tell us a lot about which sectors are poised to take off next year.

Let’s dig in. Along the way, we’ll hone in on the 33 funds that are cashing in as these breakthrough trends head higher.

Markets have always believed that technology will improve the global economy. But every once in a while investors get too excited and see value in all the wrong places.

A classic example? The boom and bust of dot-com IPOs in the late 1990s. The market was right about the Internet changing the world, but it failed to pick the winners and losers.

So we shouldn’t treat the market’s latest bets as gospel. But the trend is clear: bitcoin, hardware and biotech are the real game changers now.

That’s why the Bitcoin Investment Trust (GBTC) is by far the biggest winner of 2017, with 477.5% gains so far. That’s way ahead of the other winning tech ETFs, though many have clocked impressive returns, too: 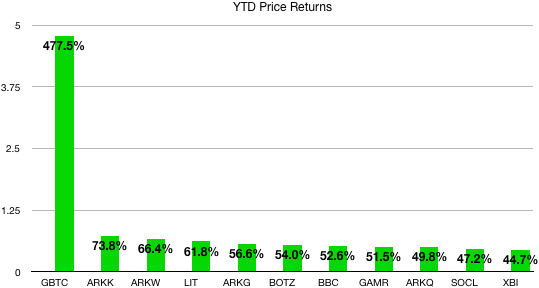 These funds are all over the place, betting on social media, biotech, battery technology, genomic research and video games. What they have in common is a belief that many technological revolutions are starting now—and there are identifiable companies that will profit.

It’s no secret that the US dollar has had better times. After a bull run through 2015 and 2016, the greenback has given up a lot of those gains to emerging market currencies, the euro and even the post-Brexit pound. If you bet on a stronger dollar through, say, the PowerShares DB US Dollar Bullish ETF (UUP), you probably aren’t happy: 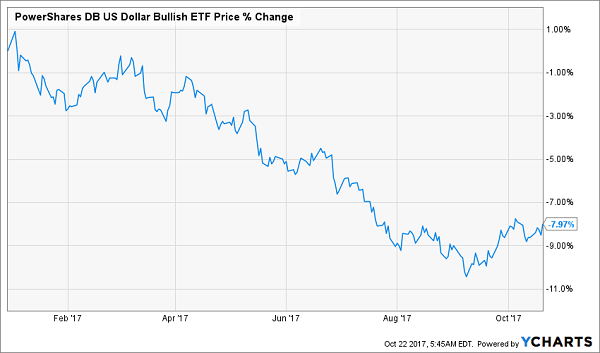 On Wall Street, a lot of analysts and traders made the mistake of betting on a dollar recovery in the middle of the summer. Boy, were they wrong! And while that’s not good for Americans looking to vacation abroad, it’s been great in other parts of the globe, particularly emerging markets and Asia.

So great, in fact, that many China- and emerging market–focused ETFs are up over 50% and a few are close to that mark. This emerging-market strength has also benefited Germany, whose euro currency is getting stronger; the country also sells lots of technology to China.

A ton of winners here, so let’s list them:

There have been so many foreign-ETF winners that it’s been tough to pick a loser! All you had to do was see that the dollar’s recent gains couldn’t last after an unprecedented run.

It’s an old belief that’s the cornerstone of contrarian investing. The idea is simple: bubbles form when everyone gets greedy, no one is fearful, and asset prices get too pricey. The market has definitely moved away from fear. No evidence of that is clearer than the VIX.

The VIX is currently at 9.95, far from 13.75 a year ago, really far from its long-term average of 18.7 and even further from its all-time high of 67, in the midst of the financial crisis.

The VIX: A Picture of Tranquility 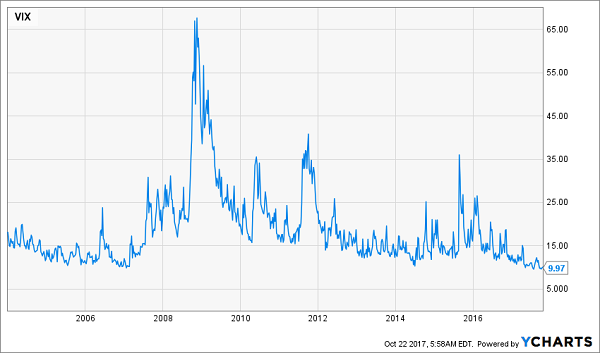 While a lot of pundits have spent 2017 warning that the VIX is due to rise “any day now,” anyone betting that the opposite would happen has made out like a bandit. Just behind bitcoin, the best performing ETFs of 2017 have been short volatility:

But that doesn’t mean they haven’t been great holds this year! Of course, what goes down must come up, so the decline in the VIX is unlikely to last. No one knows when it will recover or what will start the rebound, but you can bank on a change in the wind here.

Last week, over a thousand investors poured into my very first live webcast to get 2 explosive picks my proven fund-picking system just revealed!

If you missed these 2 must-buy funds,  CLICK HERE to watch a rebroadcast of this one-time-only event NOW.

These stealth funds, a special type of investment called a closed-end fund, pay stout 7.1% dividends and boast ridiculous discounts to their true value. In fact, my system indicates those weird markdowns will slam shut in early 2018, catapulting us to quick 22%+ total returns!

And that’s just the start.

Because last Friday at 9 a.m., I released another fresh closed-end fund pick throwing off a 7.1% cash gusher, and I want to send you that one too!

Like the 2 picks I released at the live event, this one pays a 7% dividend, but its payout is poised to grow quickly thanks to the massive cash flows its portfolio is delivering. Plus it’s got even more upside thanks to its laughable discount … which can’t defy gravity forever.

When you CLICK HERE you’ll get the 2 new CEF picks I revealed in my webcast (if you haven’t already) and the chance to sign up for a no-risk, no-obligation trial to my exclusive CEF Insider service, which will grant you immediate “insider” access to my latest pick, which is on the front page of the current issue!

But I must warn you: demand for has been far higher than we expected, busting through the “cap” on new CEF Insider members we set to get this new pick. We’ve added a few extra seats, but you need to act now.

Don’t miss out. Go right here to get all 3 of these 7%+ income wonders now!