Russia’s reckless (and, sadly, increasingly ruthless) invasion of Ukraine has put a spotlight squarely on the commodity markets. Many of them have already taken off to the moon. Crude oil, of course, was the first to hit orbit.

But there’s one hard asset that’s still flying under the radar—at least for now. And this commodity just so happens to be a source of aggressive dividend growth.

Oil, as mentioned, is most of the media’s attention. Not only has “black gold” set the investing world on fire, with the highest crude-oil prices seen in more than 13 years—but Americans are forced to watch that filter down into all-time-high gas prices.

Gold is glittering once again, too. The yellow metal is approaching its all-time high of $2,089 per ounce set in August 2020.

But one lesser-loved metal has already climbed the mountaintop and could continue to appreciate more amid European conflict. And that bodes well for a small number of producers that have taken this metal and turned it into increasingly generous cash payments to their shareholders.

The Doctor Is In

The metal in question is copper—that versatile industrial metal that’s used in everything from TVs and appliances to motors and electric generators.

Copper, like dozens of other hard assets, was already shooting higher over the past few months thanks to that blessed combination of surging demand and supply shortages.

Prices were already up more than 20% year-over-year as of January. And Bloomberg notes that “the benchmark price to ship copper in the U.S. is at the highest in data going back to 2003.”

That upward price pressure has only grown since Russia invaded Ukraine and much of the globe fought back with sanctions. Yes, Russia is a top-10 copper producer, but it still only produces less than 4% of the world’s share of the metal. However, growing concerns about additional supply-chain headaches have caused copper prices to surge by as much as 10% since Russia’s army crossed its neighbor’s borders, hitting all-time highs near $5 per pound.

Other factors are propping up “Doctor Copper”—thusly named because economists sometimes use the metal to gauge changes in the global economy’s direction. For instance, Chile, the largest global copper producer at roughly 25% of the world’s supply, has experienced a substantial drop in output in recent months, with the blame put on water scarcity and low ore quality.

Wall Street isn’t exactly flush with ways to invest in this phenomenon—there are only a handful of U.S.-traded copper producers, but they’re worth a deeper look. That’s in part because they tend to provide strongly correlated upside with the price of copper and any other metals they mind. But that’s also because this tiny space is teeming with impressive dividend growth.

Let’s examine a few of these stocks, which yield up to 5.4% and have expanded their payouts by as much as 10x in recent years.

One thing you’ll find with a lot of U.S.-traded copper plays is that they’re hardly exclusive to just one metal.

Such is the case with Newmont Gold (NEM), the world’s largest gold mining company that just so happens to moonlight as a copper miner. It also produces silver, zinc and even lead. Over a little more than a century of existence, it has expanded its reach to four continents: North America, South America, Australia and Africa.

Like with most miners, prices in their underlying commodities matter most. But obviously, if you’re depending on these companies for income, you’d like some modicum of financial strength. And indeed, newmont has that, boasting a clean balance sheet that includes $5 billion in cash and investments, and $8 billion in total liquidity.

That, as well as extremely cost-efficient operations that help it squeeze more cash out of gold, copper and other metals than most of its competitors, has allowed NEM to produce one of the most beautiful dividend-growth charts I’ve ever seen. 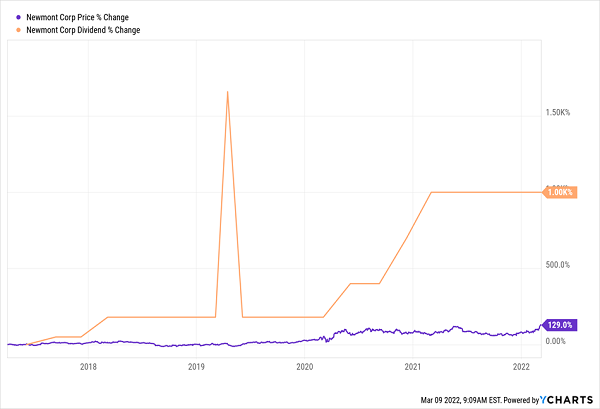 Importantly, that dividend is only 56% of this year’s expected profits and 60% of 2023’s slightly lower earnings forecasts. (Remember: Commodity stocks’ profits are going to fluctuate based on commodity pricing. It’s just the nature of the beast.)

Royal Gold (RGLD), as you might have deduced from the name, is another diversified commodity play that primarily is entrenched in gold, but also boasts several copper operations, as well as silver, zinc, lead, nickel and cobalt.

The thing is, though, Royal Gold isn’t a miner.

The company’s moniker provides another hint—it’s actually in the business of royalties and other profit streams. These contracts are based on all various stages of metal mining, be it exploration, evaluation, development or production. Basically, Royal Gold provides money that allows miners to directly invest in, say, construction, equipment or exploration, or even just to strengthen their balance sheets. In return, Royal Gold receives a stream of profits from these miners’ operations.

In a way, RGLD is more diversified than a typical miner, as it has its fingers in a lot of pies. But again—its bottom line ultimately is up to whatever prices gold, copper, silver and other metals are selling for, so you still see just as much price volatility as your average miner. 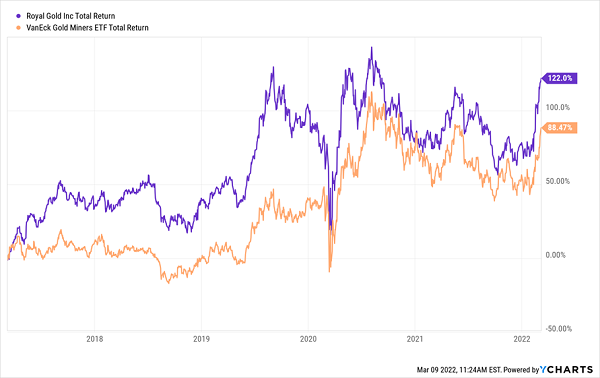 Dividend growth isn’t as explosive as Newmont (but whose is?)—and really, it’s hardly explosive at all. Still, a 40% improvement on the quarterly payout since 2018 is a respectable clip, and it has come at an even pace. Payout ratio is a thin 30%, too, so it should be sustainable when and if commodities come back to earth.

Southern Copper (SCCO) is the real McCoy, in more than one way.

For one, it’s hard to find miners of any metal that can match SCCO’s combination of high current yield (5%-plus) and dividend-growth history.

A Dividend Quadrupler in Just 10 Years! 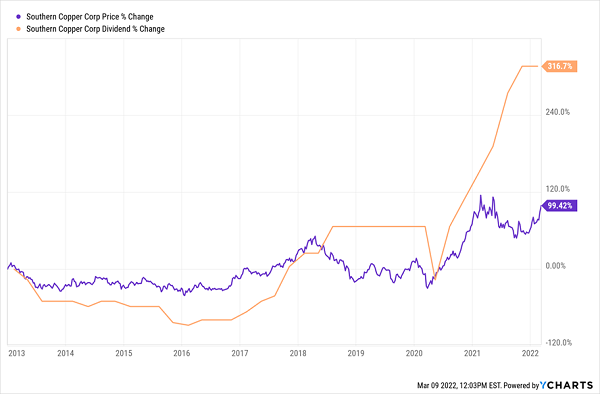 And more importantly, it’s hard to find a more direct play on copper than this Phoenix-based miner.

Southern Copper primarily operates in Peru and Mexico (though it also has exploration operations in Chile), and it boasts the highest copper reserves in the mining industry. Again, metal miners tend to diversify, and SCCO is no different, also digging for molybdenum, zinc, lead, coal and silver. But copper is tops by a lot—the company produced more than 965,000 tons of copper in 2021; the next-closest metal was zinc, at 66,958 tons.

SCCO itself could end up contributing to higher prices in copper, with expectations to produce just 922,000 tons in 2022—off more than 4% from last year. But it expects to rebound to 1 million tons by 2023, and as high as 1.8 million tons by the end of the decade.

That gives Southern Copper more opportunity to leverage high prices on the metal…if high prices persist. If they don’t, it’s fair to wonder about that high dividend. SCCO is on pace to pay out $4 per share this year, versus projected earnings of $4.26. That’s not a lot of room for error.

Stocks and Bonds Are Crashing, But We’re Doubling Our Money

Every major market is plummeting faster than ever, and investors are losing their shirts.

And while all the darlings of the stock market are getting crushed, a small, overlooked basket of recession-proof stocks are not just surviving—they’re set to thrive.

But these “Hidden Yield stocks” offer savvy investors the opportunity to double their money roughly every five years with predictable, reliable 15% returns no matter what the wider market does.

How are they able to do this while supposedly idiot-proof blue chips can’t? It all boils down to what I call “The Three Pillars”:

Selecting companies with a proven track of increasing their dividend payments is the safest, most reliable way to get rich in the stock market. And I want to show you how it’s done.

Click here to get a FREE copy of my 7 Recession-Proof Dividend Stocks With 100% Upside, including tickers, dividend growth histories, full analyses of each pick … and I’ll throw in a few other bonuses, too!