3 Blue Chips That Are In for a Rude Awakening

A bull market that’s already long in the tooth is staring political and even natural headwinds right in the eyes. Valuations are stretched. And even some of Wall Street’s biggest names – three of which I’ll warn you about today – are increasingly looking vulnerable to massive pullbacks should the market buckle under pressure.

(I’ll also give you seven dividend growers with 100%+ upside to buy instead later on.)

Mother Nature is pulling the emergency brake on Hurricane Harvey, which hovered over Texas for days, delivered what some experts estimate is between $150 billion and $180 billion in damages. One estimate of $190 billion would translate into a -1% hit to the U.S. economy.

And while that recovery has barely started, the U.S. still faces wildfires raging in the Pacific Northwest, as well as the brewing threat of Hurricane Irma – a Category 5 storm that’s believed to be among the most powerful Atlantic hurricanes of all time – colliding with Florida after tearing through Puerto Rico and the Caribbean.

A potential debt limit showdown that could’ve rattled America’s cage even further has seemingly been avoided, but by a bizarre turn that has seen Donald Trump side with the Democrats on a short-term budget plan and debt-ceiling raise that also will fund Harvey relief. The move has rankled Trump’s base, and has only kicked the can down the road to the end of the year, and given the Democrats leverage to boot.

Meanwhile, the U.S. bull market is several months into its eighth year, putting it second only to the 1990-2000 run in terms of length. Its longevity is stretched, and so is the S&P 500’s valuation – at a forward price-to-earnings ratio of 17.6, the index is trading at its highest levels since the early aughts.

Some stocks are guiltier than others.

While a receding tide drags most boats lower, three blue-chip dividend stocks in specific look overpriced and in perilous position. If you hold any of these, keep an extra-close watch in the months ahead.

You can argue how much of a “blue chip” ConocoPhillips (COP) really is, but it’s still one of the energy sector’s biggest players, and it’s also on an uneasy perch.

COP cut into its dividend for the first time in at least a quarter-century back in 2015 amid the oil-price crash, dramatically slashing its regular payout from 74 cents to 25 cents as the company went into cash preservation mode.

On one hand, the company has rallied by roughly 40% from its February 2016 lows, and ConocoPhillips is expected to recover to the tune of 19% on the top line this year while eking out a 24-cent-per-share profit after losing $2.66 per share in 2016. But that’s thanks to easy-as-pie comps, and even in a more “normal” environment, analysts expect COP’s revenues to shrink back by more than 5% next year.

Meanwhile, COP’s forward P/E has swelled to nearly 40, impressively dwarfing the most expensive market sector, with energy as a whole trading at nearly 27 times forward estimates. And while oil is perking up of late, its upside seems capped by ample crude supplies.

While a once-plump dividend may have made COP a safe haven in the event of a market crash in the past, its yield now resembles a 10-year T-note – and ConocoPhillips won’t look nearly as attractive as a Treasury in the event of a rocky market landing.

ConocoPhillips (COP) Still Has a Few Leaks to Plug 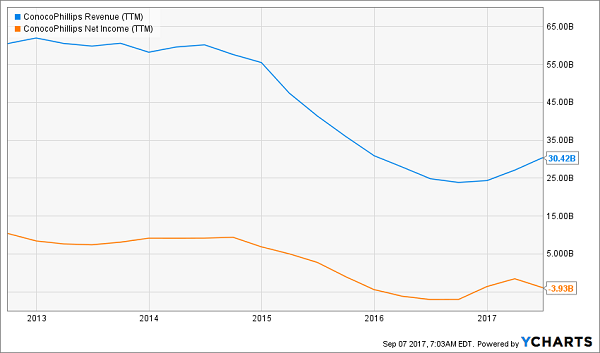 The only sector more expensive right now is a usual safe haven in times of market turbulence: consumer staples, which trades at nearly 20 times earnings estimates.

The fact that Colgate-Palmolive (CL) looks expensive compared to even that, then, is both impressive and troubling. In fact, there aren’t many metrics that paint CL shares in a positive light right now, whether you’re looking at its price-to-sales ratio of 4, or its price-to-free-cash-flow of 25, which sits at the high end of its 10-year range.

Colgate-Palmolive (CL) Is a Pricey Way to Buy Dish Soap 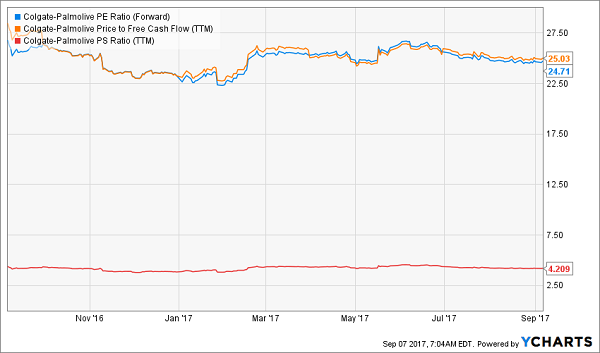 Revenues have been on the decline for years, and 2017 isn’t looking grand. Colgate’s top line was flat in 2017 to miss estimates, and the company disappointed again in Q2 with a 0.5% sales decline, maintaining its full-year expectations for low-single-digit organic sales growth. The slowdown is widespread, too, with U.S., Europe and Asia Pacific results all sliding last quarter.

Colgate does boast can’t-miss consumer brands such as its namesake Colgate dental products and Palmolive dish soaps, not to mention Speed Stick deodorant, Irish Spring soap and Ajax cleaning products. But reputation and name cache can only carry Colgate so far. In a market panic, expect investors to make a flight to quality – and away from low-growth, high-priced, modest-yielding stocks like CL.

Unilever (UN), to its credit, looks fundamentally stronger than Colgate, but let’s get real. UN shares have put up a scorching 50% return so far in 2017, putting a big, red target on its back.

Unilever has at least earned some of its bid this year. For instance, its half-year report back in July showed a 24% jump in net profits on a 5.5% bump in revenues, with underlying sales growing in all but one category. Moreover, the company lifted its full-year profit margin forecast from 80 basis points of growth to a full percentage point.

However, shares also have been an enormous beneficiary of M&A chatter this year. Kraft Heinz (KHC) – itself a successful takeover of Warren Buffett’s Berkshire Hathaway (BRK.B) and 3G Capital – offered $143 billion in cash and stock for Unilever in February, but was immediately rebuffed and pulled its offer within days. The next few months were full of speculation that Kraft Heinz would make another bid, helping buoy shares even further. 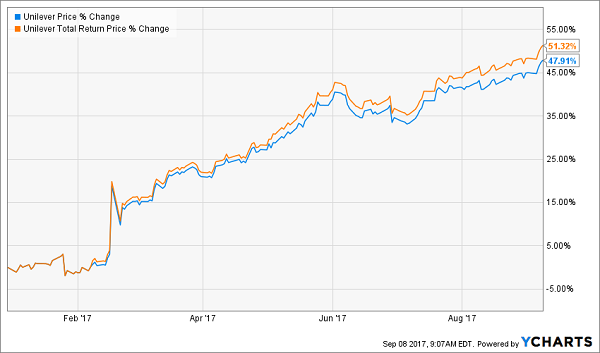 But a buyout (at least from KHC) is off the table. Warren Buffett said at the end of August that Kraft Heinz would not put in another bid to acquire Unilever.

Investors now have to ask themselves whether this 2017 run – one of UN’s best performances in decades – passes the sniff test. Unilever’s valuation has ballooned to more than the broader market, as well as the staples sector, and the stock’s dividend is down to the mid-2% level. While investors typically flock into consumer staples when the going gets tough, Unilever could be one of the first places investors turn to if they’re frightened into locking in some of their winnings.

7 “B-List” Dividend Growers with 100%+ Upside to Buy Instead

Stocks like ConocoPhillips and Colgate-Palmolive would have me on edge even if they weren’t priced for perfection! That’s because COP broke trust with dividend investors by slashing its payout considerably, and Colgate’s dividend growth has screeched to a near halt.

That’s not what you need out of stocks if you want to make it through retirement fully funded and worry-free.

You’re not going to find pundit favorites like Colgate, Exxon Mobil, Coca-Cola or any other “safe” but slow-growth blue chips with mediocre yields. You’re going to find these kinds of picks instead: