We’re in one of the trickiest times I’ve seen in my investing career: inflation is receding and we’re well positioned for gains next year. Yet after the year we’ve had, many folks are still hesitant to jump into the market.

Even the 12%+ dividends we’re seeing in our favorite high-yield investments, closed-end funds (CEFs) haven’t been enough to tempt many of them.

This period reminds me of the early months of 2009, when “green shoots” were appearing in the economy and markets, but investors were still too scarred by the preceding plunge to get in. But those who did buy then—around the bottom in early March 2009—have done very well:

Buying in Times of “Investor Shell Shock” Pays Off 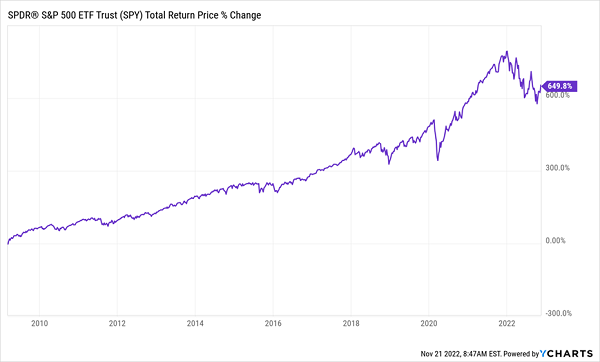 We’ve got a similar opportunity now. And we CEF investors know we can do much better than those who buy the go-to index fund, the SPDR S&P 500 ETF Trust (SPY). In fact, one of the CEFs we’ll look at below was around in ’09—and it’s crushed SPY, with a 756% return—and 80% of that gain in dividends!

This is why we invest in CEFs—with most of our return coming as dividends, we can sit back and collect our payouts in market declines while the rest of the crowd must sell to supplement their income.

We’ll take a look at the 9.7%-yielding fund that defied SPY below, plus two more that have been pushed deep into bargain territory.

First, let’s talk about those “green shoots.” They set up our opportunity to buy top CEFs at bargain prices—and hold them for income and upside.

Don’t buy it. This “jawboning” is solely meant to keep investors and consumers on the sidelines so the Fed’s rate hikes can do their job. Thing is, the job is already being done (and then some).

For one, recent consumer price index (CPI) and the producer price index (PPI) reports have come in much lower than expected. Shipping costs, too, have returned to pre-COVID-19 levels. 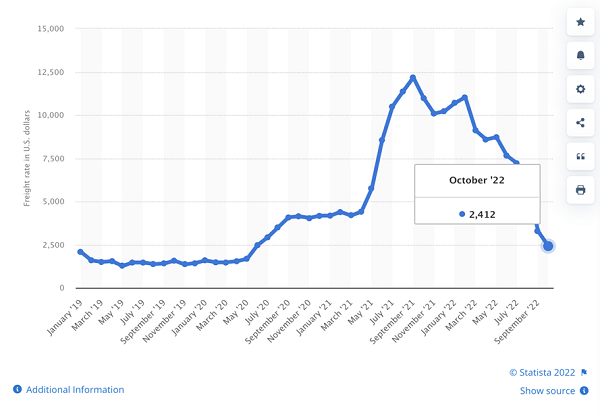 We’ve seen other costs fall quickly, too, like gas prices, which are still far below the pre-Ukraine War peak as Europe succeeds in storing enough energy for the winter.

Gas Prices No Longer a Cause for Panic 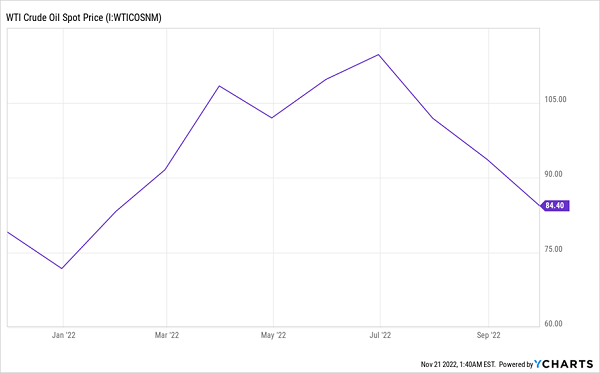 All of this is pointing to lower inflation ahead, a trend the Fed will have to start paying attention to.

3 CEFs to Consider as Inflation (and Rate Hikes) Downshift

Meantime, the market remains oblivious—sitting in deeply oversold territory as it prices in a hard landing caused by inflation and soaring rates.

This disconnect is the source of our CEF profits. But I understand that many folks are still wary, so I’ve lined up three CEFs for you to consider, ranging from conservative to more aggressive.

Conservative: Own the Dow With a “Volatility Cushion” (and a 7.3% Dividend)

Our more conservative pick is the Nuveen Dow 30 SM Dynamic Overwrite Fund (DIAX), which owns the large caps in the Dow 30 index. So you’re getting strong firms that have weathered difficult markets in the past, such as UnitedHealth Group (UNH), McDonald’s (MCD) and Visa (V).

That gives us a level of safety, as these companies have the strong balance sheets and revenues they need to face a recession.

The other “downside limiter” is the fact that DIAX sells covered-call options. Using this strategy, it sells the option to buy its stocks at a fixed price in the future. If the stock hits that price, DIAX sells it to the option buyer and keeps the fee it charges for the option. If not, it keeps the stock and the fee.

This is a low-risk strategy that provides income DIAX adds to its payout, which yields 7.3% today. The fund gets further downside protection (and upside potential) from its 4.5% discount to net asset value (NAV, or the assets in its portfolio). That’s a unique feature to CEFs; ETFs like SPY never trade at discounts.

DIAX is one of the lowest-risk CEFs for stock exposure. But its covered-call strategy also limits your upside, as the fund will likely sell its holdings before they hit their full potential.

Average Risk: A Large-Cap CEF With a 9.6% Payout

Our next CEF, the Liberty All-Star Growth Fund (USA), is the one we touched on earlier, which has outpaced the S&P 500 since the end of the 2008/’09 financial crisis. It holds large caps like Amazon.com (AMZN), Alphabet (GOOGL) and Berkshire Hathaway (BRK.B), plus a smattering of small- and midcap names, too.

That outperformance has resulted in strong dividends, as USA bought and sold its portfolio and handed the profits over as a high dividend (current yield: 9.7%).

In fact, USA has given shareholders steady payout increases, too. (The fund links its dividend to its portfolio performance, paying out 8% of its NAV per year. This gives it the flexibility to pick up oversold bargains when the opportunity arises):

USA’s Payout Soars With Its Portfolio 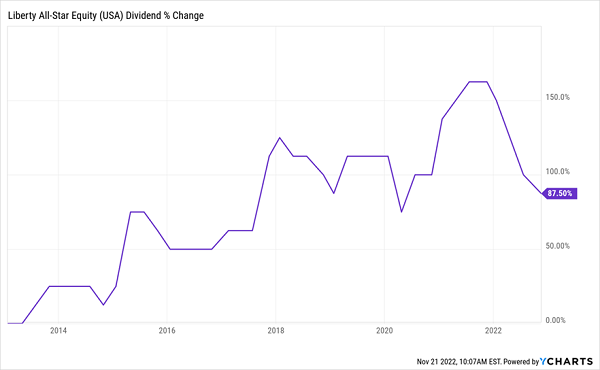 USA does trade at a slight (3%) premium to NAV, but it’s traded at premium for most of the last three years, and often higher ones. That leaves USA fairly valued in light of its high-quality portfolio and potential for bigger payouts as stocks recover.

For even more upside potential and bigger payouts, look to the 13.7%-yielding BlackRock Science and Technology Trust II (BSTZ).

With a massive 17.4% discount to NAV, BSTZ has priced in just about every disastrous outcome for the economy that you could imagine. Its discount is now at levels unseen since the pandemic hit March 2020. There’s little reason to think BSTZ should be as cheap now as it was in those dark days.

BSTZ focuses on tech, which also bodes well, as the sector that’s the most beaten-down in a selloff (tech, in the case of 2022) is often the one that leads the recovery. It also benefits from its manager, BlackRock, the world’s largest investment firm, with $10 trillion in assets. BlackRock’s size and deep connections in the tech sector give BSTZ’s managers an unsurpassed level of insight into the stocks they buy.

As for the portfolio, BSTZ has acquired shares of fast-growing tech firms like semiconductor makers Marvell Technology (MRVL) and Wolfspeed (WOLF). It complements those with strong cash-flow generators like Pure Storage (PSTG) and TransUnion (TRU). Buying TRU, which trades at 9.4 times its last 12 months of earnings and posted a 30% revenue gain in its latest quarter, was a stroke of genius, and further evidence that BSTZ’s managers know their stuff.

Even with the market’s prospects looking better in 2023, picking the right stocks will be absolutely critical. Gone are the days when you could buy anything, even speculative gambles like crypto and expect higher returns.

The last year has shown how just unforgiving the market can be to those who are taken by the siren song of such “investments.” And so it will be in 2023: quality payers with strong balance sheets and “recession-resistant” revenue will be the winners.

With that in mind, I’ve gone on a hunt for the CEFs with the very best management teams backing them. The result? a “5-pack” of monthly paying CEFs that yield 8.9% on average now.

Don’t miss your chance to buy these 5 monthly paying CEFs while they’re cheap. Click here and I’ll give you my research on all 5—including their names, tickers, best-buy prices and current yields—in an exclusive Special Report.