One of the most reliable income-producing sectors has been hit hard over the past year, handing you a terrific shot at outsized dividend yields running all the way up to 10%.

In a moment, I’ll show you two funds that let you grab these huge income streams at a big discount—and one that looks like a strong buy but is way overpriced and headed for a fall. You’ll want to keep that one as far away from your portfolio as possible.

The sector all three of these picks come from is utilities—one of only two sectors of the S&P 500 that’s down over the past year (the other being consumer staples), with a 2.6% overall decline.

The fact that utilities and consumer staples are down tells us one thing: the market has a bigger appetite for riskier stocks on confidence that the economy is expanding, with GDP growth slated to reach 3% by the end of 2018.

But that confidence has resulted in some folks shifting cash away from so-called “boring” utilities—in effect throwing out the baby with the bathwater, as the old saying goes.

And for dividend investors like us, that adds up to a nice buying opportunity.

Because as you can see in the chart below, all four of America’s biggest utilities are having no trouble making their dividend payouts (the exception, Southern Company [SO], saw its payout ratio spike as it paid for an acquisition, but that’s quickly returning to normal): 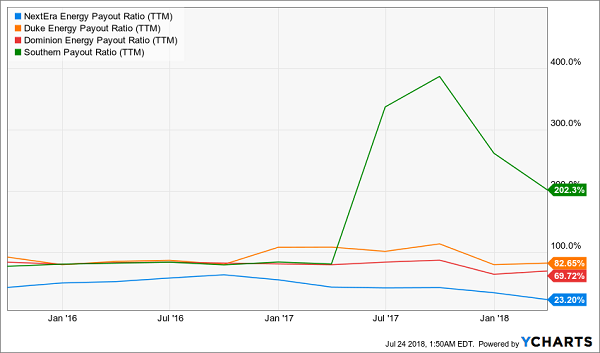 And if you want more proof that these dividends are ironclad, take a look at the history:

Dividend Growth Is in Their DNA 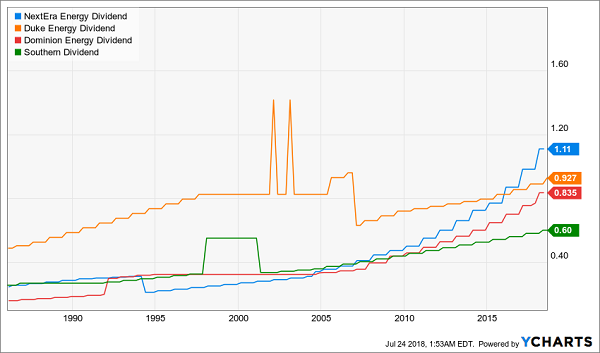 That’s why utility stocks are often called “orphan and widow” stocks: they’re reliable payers you can buy, forget about and enjoy your dividend checks.

How to Grab Up to 10% Cash Payouts From Utilities Now

Unfortunately, this is where most people get hung up. Because despite their stable cash flows and rising dividends, utility stocks are far from easy to pick. They’re largely regional and, as a result, are exposed to demographic flows and local economic developments that are tough to track.

That’s why the benchmark ETF, the Utilities Select Sector SPDR ETF (XLU), is so popular.

With a 3.4% dividend yield, XLU’s payouts are nearly double those of the S&P 500. But the great news is that we can do even better, doubling XLU’s payouts again by digging into a high-yield corner of the market few people even know exists: closed-end funds (CEFs).

Right now, there are 9 utility-focused CEFs with dividends ranging from 6.4% to 10%, making them all intriguing options. But there are 2 in particular that should be high on your list.

The first CEF is the Reaves Utility Income Fund (UTG), which is trading at an 8.6% discount to NAV after trading at a premium price for most of 2017. UTG gives investors a generous 7.3% income stream, or more than twice the payout of XLU.

That’s not the only thing UTG has going for it. This fund has crushed the benchmark ETF over the last decade, nearly doubling its total return while also giving investors a much higher payout. Bigger returns and a bigger income stream aren’t easy to find—but UTG offers investors both: 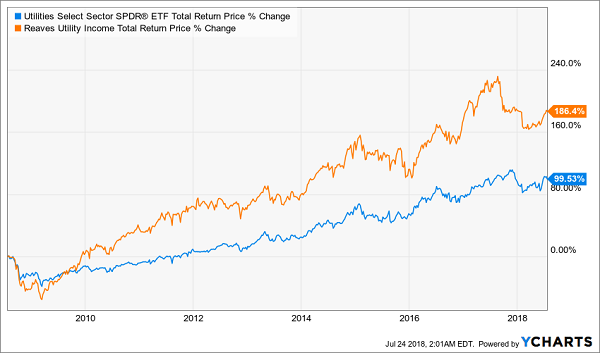 In addition to UTG, there’s another utility CEF that is worth considering—although I’ll tell you upfront that there is more risk involved.

I’m talking about the Duff & Phelps Global Utility Income Fund (DPG), which is trading at a 10.6% discount to NAV.

I’m going to be honest: DPG doesn’t have a great history. It’s underperformed the index since its IPO in 2011, although a lot of that underperformance has shown up since 2014:

This Chart Is Ready to Flip 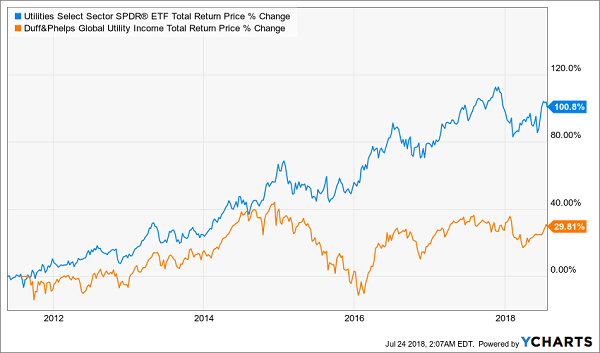 Why the poorer performance?

Well, remember back in 2014, when oil prices crashed? This was great for American utilities, which are net consumers of energy. But DPG is a global utility fund, and a lot of energy providers outside of America are also energy producers, so they’re much more sensitive to oil prices than their US cousins.

But oil is soaring in 2018. We’ve already seen West Texas Intermediate (WTI) prices jump 12.8% this year, and the strong economy probably means prices will go even higher. That could be a boon for DPG, as it benefits from higher consumption and higher oil prices.

Plus, DPG’s luxurious 10% income stream is nearly triple that of the index fund, so you’ll be well compensated by that hefty dividend while you wait for the fund’s discount to close and its NAV to rise.

Now we have to talk about another utility fund that has outperformed the market but isn’t the screaming buy it appears to be. Far from it.

An Overpriced Utility CEF to Avoid

The DNP Select Income Fund (DNP) is another utility CEF that has beaten XLU over the long term, as you can see here: 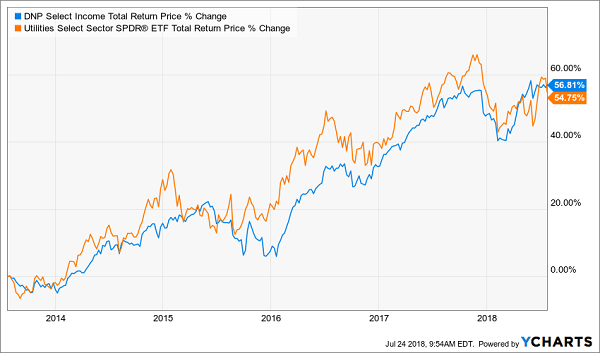 While DNP’s outperformance deserves to be rewarded, the market is going way too far, currently rewarding it with a 20% premium to NAV. Meanwhile, UTG—the first utility fund I told you about—trades at an 8.6% discount! Not only that, but UTG has beaten DNP for a long time, indicating that it is the superior fund.

The bottom line? DNP’s huge premium—and the downside it implies—alone make this CEF a fund to avoid right now.

At this point you may be wondering why you’ve never the media (and likely your own financial advisor) talk about the big yields and deep discounts in the CEF space, like the two I’ve showed you today.

The answer? They’d rather just talk about what’s popular—big-cap stocks or overbought ETFs. It saves them a lot of research, and they get paid the same amount anyway!

That’s too bad, because the totally inefficient CEF market is serving up some incredible deals on funds paying huge dividends right now, such as …

My favorite CEF to buy right now has crushed the market since inception, with a monstrous 810% return! 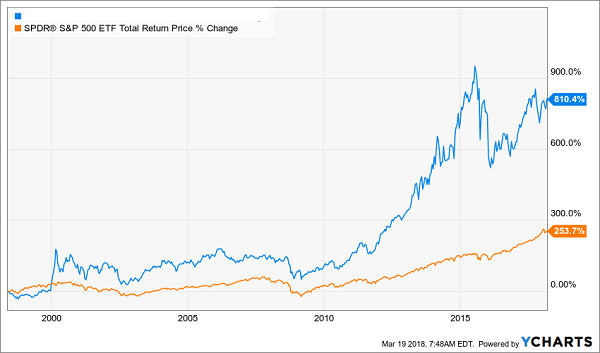 This is incredible—the kind of gain you might expect from, say, a small-cap tech stock, not a conservative fund like this one.

To give you a little more context, my No. 1 pick is a pharma fund run by some of the smartest minds in the business—researchers and doctors with “boots on the ground” experience zeroing in on the next billion-dollar-plus blockbuster drug.

That alone is reason enough to put this one on your short list.

There’s more, though. Because this dynamic fund also throws off an incredible 8.4% dividend, too!

You’d think a gain and a payout like that would at least get a few folks in the mainstream media talking.

No way. Not yet, anyway.

Why? For one, this low-key CEF is tiny, with just a $391-million market cap, so it gets even less attention than your typical CEF does.

Yet as I write, this fund trades at a 4% discount to NAV. That may not sound like much, but it’s traded at fat premiums MANY times in the past 5 years.

When it does so again, we’ll be locked in for fast 20%+ upside from here, on top of that massive dividend!

That’s our cue to buy—and I’ll give you full details on this fund (I’m talking name, ticker symbol, buy-under price and more), plus the whole story on my 4 other top CEF picks when you CLICK HERE now.

By the way, I’ve hand-picked these 5 CEFs to flourish as interest rates rise. AND your average yield (8.1% on all 5 funds) will soar as their dividend payouts skyrocket, too. Don’t miss this incredible income (and growth) opportunity. CLICK HERE for full details on these 5 rock-solid cash machines now.