Let’s talk about a fund that seems to tick all the dividend-and-growth boxes we income investors demand.

Low fees? Yep. High yield? How does a 7.7% payout (nearly six times the S&P 500 average!) sound? Low volatility? You got it: this one sailed through the 2020 COVID crash, compared to the pummeling the broader market took.

One thing you should know upfront is that the fund we’re going to delve into today is an ETF, not a closed-end fund (CEF)—though we will talk about an intriguing CEF in a moment, too.

At my CEF Insider service, we don’t usually talk much about ETFs—except to skewer them for their typically low yields! But this one is still worth discussing because its outsized dividend and low volatility just might put it on your radar at some point.

The ETF in question is the Nationwide Risk-Managed Income ETF (NUSI). Even its name sounds great. Who doesn’t like income and risk management?

First, let’s address who’s behind this fund: Nationwide, which is better known as an insurance company than an ETF provider. Unlike BlackRock, Invesco and Vanguard, with their trillions in assets throughout hundreds of ETFs, Nationwide has just four ETFs with less than a billion in assets under management in all (NUSI, at $380 million, is about half of Nationwide’s total ETF-based assets).

Nationwide, as you can imagine, is new to the ETF game, and it released NUSI in late 2019. So, as a young fund, we can forgive it (for now!) for underperforming the broader market, shown in purple by the performance of the SPDR S&P 500 ETF Trust (SPY) below. 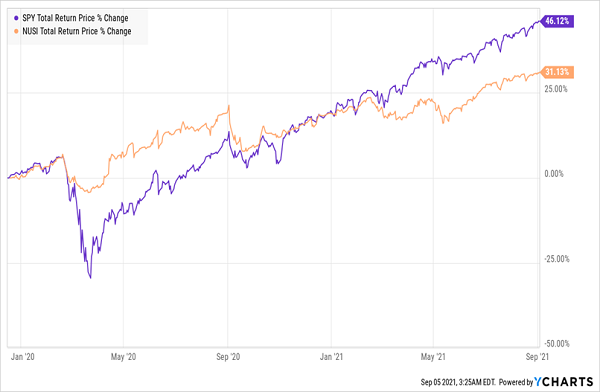 There is one standout quality about NUSI, though (aside from its 7.7% dividend): it performed a lot better than the S&P 500 during the coronavirus selloff, while still giving investors access to blue-chip US stocks. NUSI holds the firms in the tech-heavy NASDAQ 100 Index, such as Apple (AAPL) Microsoft (MSFT) and Amazon.com (AMZN). 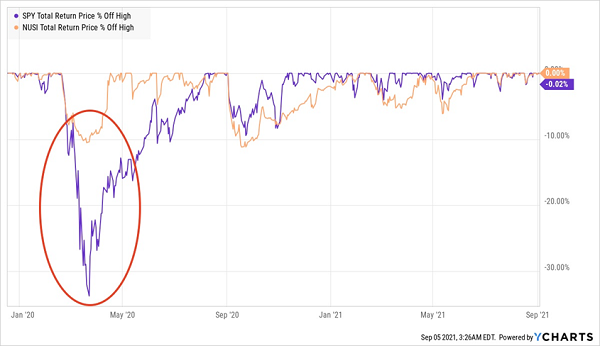 And the truly remarkable thing is that NUSI navigated 2020 while maintaining—and even growing—its payout, while S&P 500 dividends were in free-fall.

… And Goosed Its Dividend, Too! 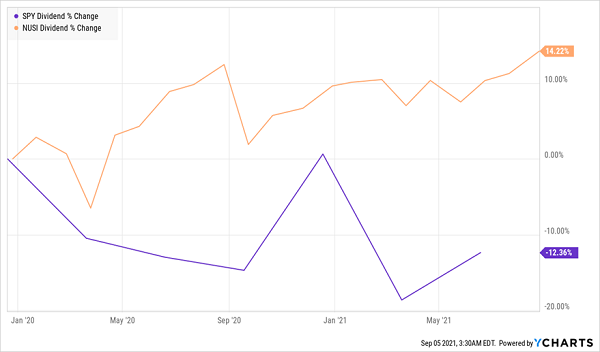 From this perspective, NUSI seems to have gotten two out of three right: it supplied investors with a high payout, which meant they’d need to sell less of their NUSI holdings to generate cash in a downturn. And it held up better in the last crash due in part to its options strategy, which generates extra cash. But those pluses came at the cost of a middling return, in comparison to the overall market.

So where does that leave us with this one?

Even though NUSI delivered strong income through the crisis, with much less volatility, it wouldn’t be my top choice for an income-focused portfolio.

To explain why, let’s look at a CEF called the AllianzGI Equity & Convertible Income Fund (NIE). Unlike NUSI, NIE augments its portfolio with convertible bonds as a way to boost its income, since these bonds yield several times more than stocks.

Granted, NIE’s dividend yield is just 4.9% now, which is quite a bit lower than that of NUSI. But NIE more than makes up for it with a total return (or dividends plus gains in its market price) that’s topped both the S&P 500 (in purple below) and NUSI (in orange) since NUSI’s inception: 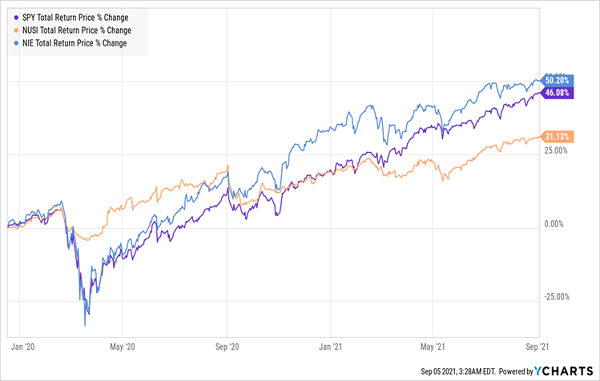 Is it worth missing out on nearly $20,000 in a year and a half to get an extra $160 a month in income? While there might be a very small group of people who would say yes to that, I think the vast majority of investors would say no.

When we break down the numbers, we see a much smaller gap in payouts between NIE and NUSI than you would expect between 4.9%- and 7.7%-yielding funds. The reason for this goes back to the big market-price gains NIE has delivered over the long haul. 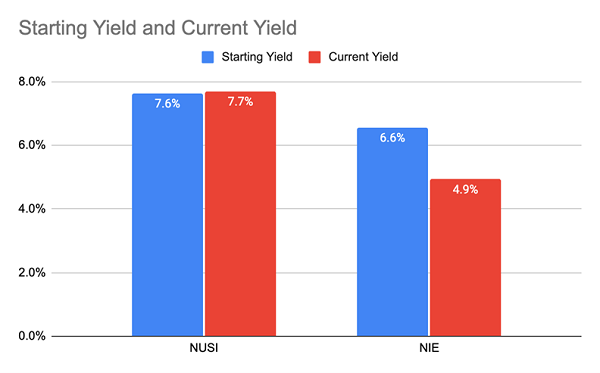 While NUSI’s dividend has gone up a bit since its IPO, NIE’s has stayed constant. But since NIE has delivered stronger price gains over time, its yield on price has gone down, because yield is a function of current payouts divided by share price.

Price Goes Up, Yield Goes Down 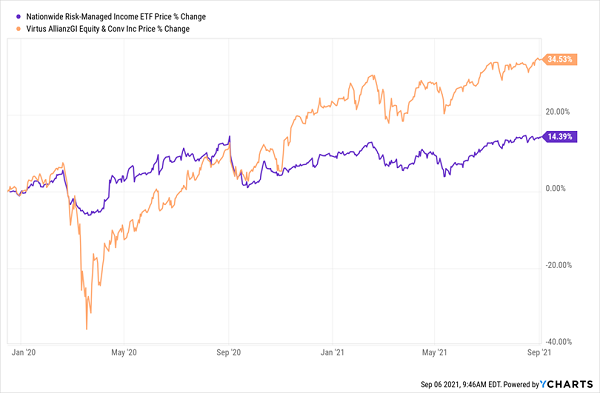 A much higher share price has pushed NIE’s current yield down, while NUSI’s share price, which is up only slightly, means its current yield hasn’t changed as much. This is why NUSI, while a nice fund to hold if there’s a correction in the near term, will earn you less money than other high-yielding funds with better portfolios.

And here’s the best part: since NIE’s current yield is now near its lowest point in the history of the fund, there is good reason to expect NIE’s management to hike payouts to shareholders, resulting in a higher yield while also delivering that superior total return we’ve seen.

My top 4 CEF picks now give you the best of all worlds, delivering a strong 7.6% average payout, plus totally unusual discounts to their true value. That’s why my latest analysis calls for 20%+ price upside in the next 12 months!

Put it all together and you could easily be looking at a solid 28% in price gains and dividends by this time next year.

Simply click right here and I’ll give you the full story on all of my top 4 picks in a special investor report.