It’s a complaint I hear about closed-end funds all the time: they charge high fees but still underperform the market.

To be honest, this is true of some funds—but not all of them. In fact, some CEFs have racked up breathtaking returns far bigger than those of the market as a whole.

I’ve written about funds that have beaten the benchmark index before, such as the 14 funds that crush Vanguard’s passive funds while also offering superior dividend yields.

Then there are the actively managed Vanguard funds that beat Vanguard’s own passive funds and have done so for years. And of course, CEF Insider subscribers know of several closed-end funds that have beaten the S&P 500 for a decade or longer and are still outperforming.

So now I want to introduce you to the 10 best-performing CEFs over the last decade. Each has gone up by more than 11% annually, on average, in that time, and each boasts a dividend yield between 5.4% and 9.5%.

First, let me just say that while all of these funds have beaten the S&P 500 over the last 10 years, that doesn’t necessarily mean they will for the next decade.

But what their strong runs do tell us is that we shouldn’t believe anyone who says it’s impossible to find a fund that will beat the market over a long period of time.

Of the 10 best-performing CEFs, five come from PIMCO.

This isn’t surprising. PIMCO has strong in-house talent and is more dedicated to its CEFs than some companies, which tend to focus on more popular ETFs and mutual funds.

And while there are problems with some of the above PIMCO funds (I warned about one, PGP, on June 1st), they deserve praise for what they’ve accomplished before, during and after the 2008–09 market implosion.

Part of the reason for their outperformance is that they invest in hard-to-access corporate and secondary bonds, including mortgage-backed securities (MBS; yes, the same things that drove the 2007–09 crisis) and even more obscure assets such as currency derivatives and reverse repurchase agreements. 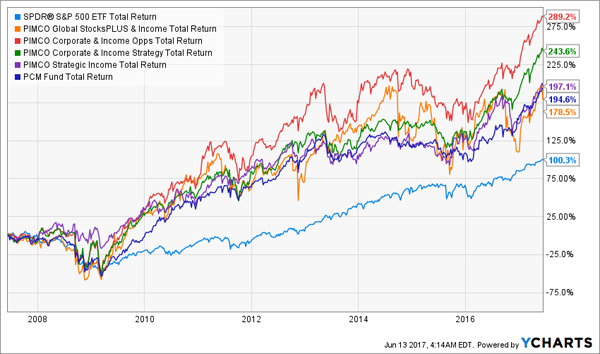 Investors who dismiss financial complexity should be humbled to note that PIMCO has consistently delivered returns dramatically higher than the S&P 500’s 100% gain over the last decade.

While PIMCO is winning the CEF race, there are lesser-known funds by issuers both big and small that have quietly delivered tremendous market-beating profits to investors.

The No. 2 performer, JH Premium Dividend Fund (PDT), from John Hancock, is up 13.2% annually, and it’s done it by investing in well-known big cap companies like Bank of America (BAC) and Dominion Energy (D), its two biggest current holdings.

Stock Funds Double Up the Market 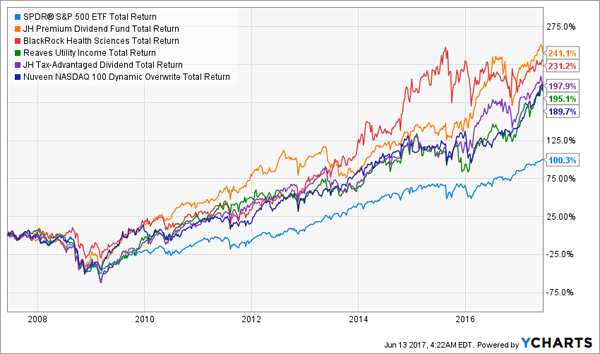 There’s no one single approach behind these funds’ success, but what’s interesting is that they all invest in the same well-known firms most investors put their savings into. These managers are just really good at picking the right companies.

Even so, before you put a penny into these CEFs, you should heed the old financial standby: “Past performance is no guarantee of future results.”

To tell you the truth, I’ll be shocked if a single one of these funds shows up on a top-10 list a decade from now.

The fact is, while all 10 have amazing track records, they’re starting out the next 10 years in a big hole, because each one is overpriced, some ridiculously so.

Just look at PGP, which trades at a 75% premium to net asset value (NAV), or the value of its underlying assets. That’s absurd and absolutely crying out for a correction!

The last thing you want is to be caught in the downdraft when these funds snap back to discount territory.

That’s why I’ve just released a new FREE report that gives you just the opposite: 4 bargain CEFs set correct to the upside—I’m taking gains of 20% (or more) in the next 12 months alone!

Oh, and you’ll be collecting a nice 7.5% average yield too, so your real gain is closer to 28% here, with a nice chunk of that in cash!

Best of all, you’re still getting some reassuring past performance. My No. 1 pick ticks off all my boxes: