This Incredible Fund Soared 517% (and it’s just getting started)

Today I’m going to show you how one savvy buy can help you turn $100K into a $500,000 windfall. Plus, you’ll “automatically” build yourself a tidy monthly income stream—I’m talking $2,700+ here—without lifting a finger.

That’s enough for many folks to retire on.

At the center of it all is a little-known group of investments called closed-end funds (CEFs)—and one fund, in particular, whose name, dividend and incredible track record I’ll reveal in a moment.

For now, here are the two key things you need to know about CEFs: first, they pay huge dividends (6.9%, on average, with some paying well into the double digits). Compare that to the measly 1.8% you get from the typical S&P 500 stock.

Second, many of these income plays also clobber the market. And even those that only match (or even slightly trail) “regular” stocks are still better buys than your average blue chip. Because while the typical S&P 500 stock pays you mainly in capital gains, which, let’s be honest, can be wiped out in a day, CEFs’ high dividends mean you get a big slice of your return in cash.

That brings me to the fast-rising CEF I want to show you today—the Cohen & Steers Quality Income Realty Fund (RQI), a US real estate–focused fund that yields 6.3% (paid monthly, no less), has obliterated the market and—thanks to plunging interest rates (which will draw more income-starved investors in)—has plenty of upside left!

Let’s take a look at just how potent a wealth generator this fund has been in the last decade. Then we’ll dive into the critical (and totally ignored) edge that sets it up for more gains in the years to come. 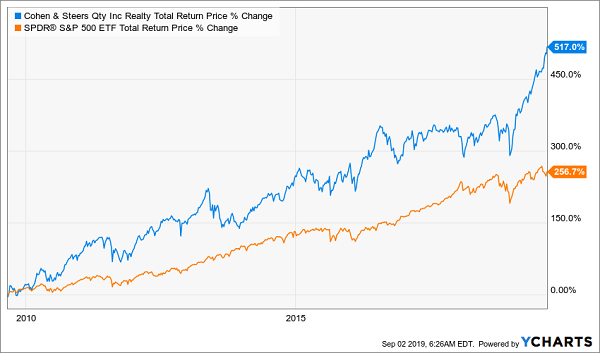 As you can see above, this fund has given investors more than double the return they would’ve gotten with the S&P 500 since the financial crisis.

That just goes to show you how one strong outperformer (with a sizeable dividend) can reshape your retirement—and help you clock out on just $100K.

A Management Team That’s Second to None

RQI’s secret weapon is its whip-smart management team, which you’ll “hire” to work for you if you buy this fund today.

That would be New York-based Cohen & Steers, which has been managing real estate portfolios for clients for over 30 years. The firm’s expertise and deep connections in the real estate business have been major drivers of the rock-steady returns they’ve delivered.

The thing I like best about them? Cohen & Steers isn’t afraid to go against the herd when they see an opportunity. To see what I’m getting at here, let’s go back a decade, to when America was just starting to recover from the worst economic collapse in 80 years—a collapse caused by real estate!

Cohen & Steers, through RQI and its other real-estate CEFs, pounced, jumping into a market that had seen prices crash 20% to 60% during the crisis—and because so many investors were shell-shocked by real estate a decade ago, they C & S bought with little competition. 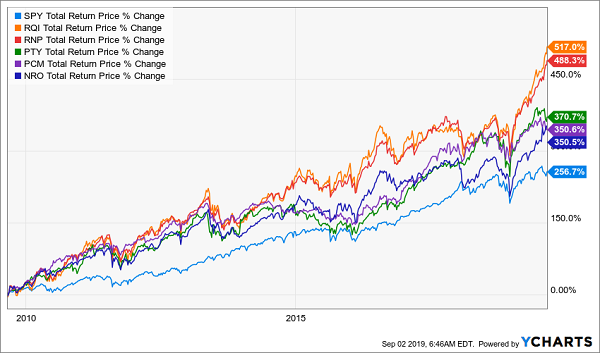 So where does this leave us? With a fund that’s crushed the competition (and the market) since the financial crisis; is run by one of the savviest CEF shops out there; boasts a steady 6.3% dividend paid monthly; and still has plenty of upside.

There’s just one missing element with RQI: the fund trades around the value of its portfolio (or net asset value, as they say in CEF-land), and I like to buy CEFs that trade at a discount.

Reason being, we can grab huge capital gains (to go along with our high dividends) as these discounts dissolve, “catapulting” our funds to double-digit gains as they do!

That’s what’s in the cards for the 4 CEFs I like better than RQI right now. Like RQI, all 4 are set to get a big lift as the Fed cuts rates.

But that’s just the start. Because unlike RQI, all 4 trade at ridiculous discounts to NAV.

The bottom line? I’m calling for 20%+ price upside from each of these 4 stout income plays in just the next 12 months!

And let’s talk income: RQI’s 6.3% payout is great, but it pales next to the 8.7% average yield my 4 picks pay—and one member of this quartet yields an incredible 10.7% as I write this.

The latest pullback has made these funds even better deals than they were a couple weeks ago, making now the perfect time to buy.

Don’t miss out. Click here and I’ll give you the full story on each of these 4 income (and gain) powerhouses: name, ticker, buy-under price, dividend history and more.