This Gimmicky Dividend Strategy Will Cost You Money (Do This Instead)

These days, everyone is looking for safety—and that’s got some folks pondering some pretty, er, unusual strategies that seem secure but are in fact anything but.

Let’s take Verizon (VZ), a stock investors buy mainly for its 5.4% dividend. Its most recent ex-dividend date was July 7. (This means that anyone who held VZ shares when the market opened this day would receive its $0.67 quarterly payout.)

Knowing that stocks tend to appreciate in anticipation of their ex-date, we could have attempted to “capture” the dividend by purchasing VZ on July 1 and holding the stock until July 15. The S&P 500 happened to appreciate 1% during these 15 days, so we’d expect to have pocketed the payout with a bit of price appreciation to boot. Unfortunately, VZ dropped 1.2%!

Captured the Dividend, Lost It (and More) in Price 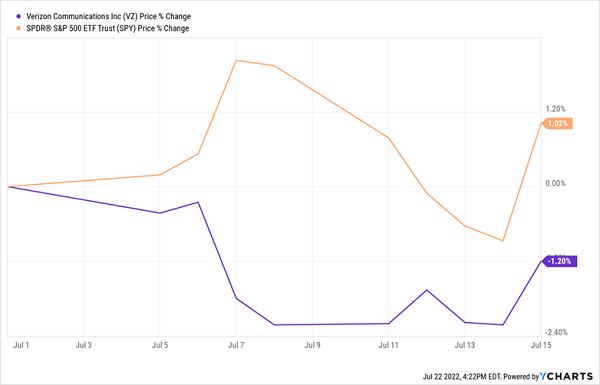 The above attempt wasn’t a complete disaster. Unless we project it out over a year and see that it puts us on pace to lose more than 31% annually. But I digress…

Really, it’s about the timing of the purchase. Let’s look at Phillips 66 (PSX), which has held up great this year in light of hefty refinery margins (to the disgust of anyone with a gas-powered car!). Any motorist trying to “get revenge” by capturing PSX’s most recent dividend, paid on June 1, would have done better than with Verizon:

Capture a Dividend, and a Mini-Moonshot 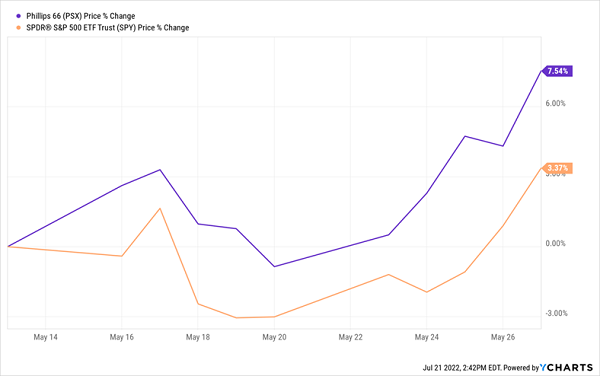 Of course, the S&P 500 moved up 3.4% over these 15 days, so that helped. But you’d have done much better than the average investor in this dumpster fire of a year by simply holding PSX since January 1—and you’d have made your life a lot less complicated, too! 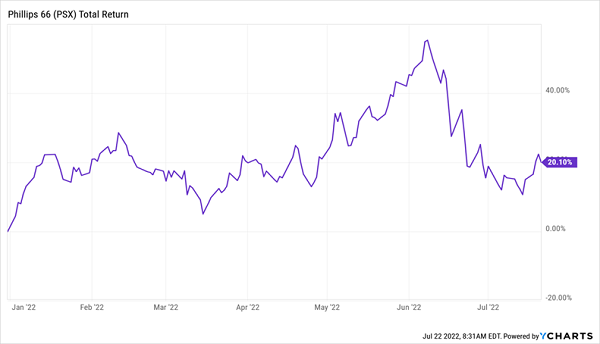 My VZ and PSX examples are, obviously, purely arbitrary and for educational and entertainment purposes only. That said, how do we find more 7.5% winners and fewer 1% losers?

I’ll share a couple actionable income ideas with you in a moment. Neither has anything to do with ex-dividend dates, or capture of any sort.

Why not? Because there’s no alpha available in this strategy. Besides, how many supercomputers on Wall Street do we believe are mining for these ex-dates and any potential “blip” worth buying? Enough to act faster than you, me and our slow human brains, that’s for sure.

So let’s save ourselves the time and (fruitless) effort of capturing one dividend at a time. Instead, we’re going to take a 2-step approach, building a portfolio that pays a steady stream of monthly dividend income while fueling our upside, too.

Step 1: Fire Up the “Dividend Magnet”

Let’s start with that upside, which will be fueled by dividend growth, which, as you likely know if you’ve been reading my Contrarian Outlook articles, is the No. 1 driver of share prices.

To see what I mean, consider drug distributor AmerisourceBergen (ABC), which has increased its dividend by 267% over the last five years, and its share price has followed along like a puppy dog—a highly predictable phenomenon I call the “Dividend Magnet”: 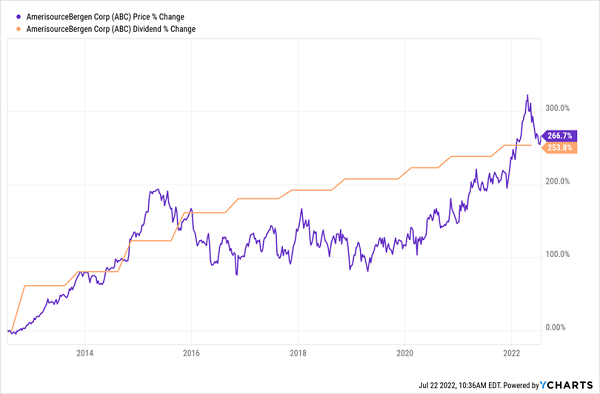 You may recall that ABC, its two main competitors and Johnson & Johnson (JNJ) were recently being sued by 21 states. That kept the stock price discounted. But in July 2021, the four firms tentatively agreed to settle for $26 billion. This may sound like a huge sum, but because it is actually less than the market feared, it likely boosted ABC’s stock price to help it catch up with its “Dividend Magnet,” as you can see above.

And the stock still trades at a cheap 12-times free cash flow! Management, recognizing this, recently announced a $1-billion share buyback—enough to take 3% of ABC’s outstanding float off the market. That will boost the company’s earnings per share, which should throw a further lift under its share price.

Could we try to capture ABC’s next dividend payment in August? Sure, but I’d rather buy it here because it’s likely to be trading higher by this time next year. Plus by then we’ll have four more of its quarterly dividends, along with a nice dividend hike, in our pockets.

Step 2 is even simpler than sifting out stocks with Dividend Magnets like ABC. We’re going to give ourselves a nice, high monthly dividend stream to stabilize our payouts and give us our cash faster than we could if we just relied on quarterly payers.

We can also reinvest our “monthlies” faster, too, if we don’t need all the income, boosting our gain potential and our income stream.

Closed-end funds (CEFs) are a great place to hunt for monthly payouts because the majority of these underappreciated investment vehicles pay monthly. And they hand us superb dividend yields, too, with many CEFs paying north of 6%.

A smart play here is the Gabelli Dividend & Income Fund (GDV), which is a far better way to hold the blue chips of the S&P 500 than an ETF, with stocks like Alphabet (GOOGL), American Express (AXP) and Mastercard (MA) showing up in its top-10 holdings, along with a smaller contingent of international stocks.

The fund, run by value-investing guru Mario Gabelli, yields 6.2%—4.5-times more than an S&P 500 index fund—and boasts a monthly payout that’s as steady as they come, having nearly doubled in the last 13 years and holding steady through the 2022 mess. Investors even picked up a nice $0.06-per-share special dividend in January

GDV: A Monthly Payer You Can Build a Portfolio Around

One of the nicest parts of CEF investing is these funds’ discounts to net asset value, or NAV—CEF-speak for the value of the fund’s portfolio. These discounts only exist with CEFs, and right now, GDV trades for 12% less than the average per-share value of the stocks it holds. That’s actually a bit below its five-year average discount of 8.8%, suggesting some nice upside as GDV’s deep discount floats back up to “normal.” When the market bottoms, this could be an interesting play.

The bottom line here is that it’s tough to see the point of playing games, like trying to capture a stock’s dividend, when you can make just a few buys like the ones above and give yourself a string of solid monthly payouts, plus a nice shot at payout hikes and payout-driven gains, too.

What should you do with the rest of the time? Spend it with the grandkids, in the garden—anywhere else but in front of your computer!

REVEALED: A 7% Monthly Payer Portfolio That Can Bankroll Your Retirement

Many folks who limit themselves to the big names of the S&P 500 (which almost all pay dividends quarterly) have no idea that you can easily bag monthly dividends if you know where to look.

Around two-thirds of all CEFs pay monthly, for example, and you probably won’t even have to say goodbye to the blue chips you currently own to get those monthly payouts. Many stock-focused CEFs, like GDV, hold the very same stocks!

That brings me to my “7% Monthly Payer Portfolio,” which is packed with monthly paying stocks and funds that instantly diversify you across the economy and, as the name says, yield 7% on average—easily topping GDV’s 6.2% payout.

My team and I have pulled together an Investor Bulletin on this groundbreaking portfolio, which you can read right here. In that bulletin, I’ll tell you all about my strategy for bankrolling your golden years with monthly payers and I’ll show you how you can download a free Special Report giving you the names of all the stocks and funds inside my 7% Monthly Payer Portfolio.

Click here for all of this critical intel and to get your Special Report containing the names, tickers, current yields and my latest research on every stock and fund in my 7% Monthly Payer Portfolio.